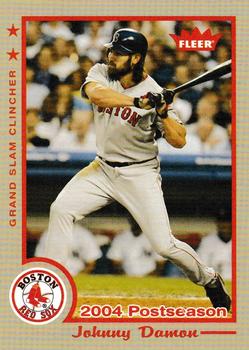 Everyone watching the game knew Dave Roberts was put in to try to steal second base. It was Game Four of the 2004 ALCS, and the Red Sox had lost each of the first three games of the best-of-seven series to their archrivals, the New York Yankees. The third of the three losses hadn’t even been close: a crushing 19-8 defeat at Fenway Park. No team had ever come back and won a best-of-seven series after losing the first three. The year before — 2003 — the Sox had at least taken the Yankees to Game Seven, but Boston lost that one in extra innings.1

It might have seemed more merciful for Red Sox fans to accept their fate without extending the 2004 ALCS into a fifth, sixth, or seventh game. New York held a 4-3 lead heading into the bottom of the ninth. They had Mariano Rivera on the mound, the greatest reliever the game has ever known (and the first player ever unanimously elected to the Hall of Fame). Kevin Millar walked. Manager Terry Francona sent in Roberts to pinch-run; everyone knew his mission. He pulled it off, a stolen base. Bill Mueller drove him in, tying the game. David Ortiz homered in the bottom of the 12th. The Red Sox lived for another day.

In Game Five, David Ortiz again won the game in extras, with an RBI single in the bottom of the 14th. The series moved back to Yankee Stadium.

Game Six: Boston’s Mark Bellhorn hit a three-run homer in the top of the fourth. Curt Schilling — bloody sock and all — held the Yankees to four hits and one run over seven innings. Bronson Arroyo and Keith Foulke pitched an inning each, and the Red Sox won, 4-2. Improbably, the stage was set for Game Seven.

Indeed, no baseball team had ever lost the first three games of a best-of-seven series and come back to win four in a row.2

Yankees manager Joe Torre started righty Kevin Brown.3 In 2004 he had been 10-3 through August, but he’d lost all three of his starts in September. In the postseason, he’d been inconsistent.4

There were 56,129 fans packing Yankee Stadium. Most of them were Yankees fans, desperate to finally finish off these Red Sox and get back in the World Series.5 The Red Sox were the wild-card team in 2004 and they’d looked like pushovers in the first three games. But the self-styled “Idiots” showed resilience and a winning spirit in Games Four through Six.6 What had looked like a laugher of an LCS had evolved into real drama. Still, all the odds were with the New York Yankees.

Brown was a bust in Game Seven. Johnny Damon led off for the Red Sox and singled to left on the sixth pitch, then stole second base. Brown struck out Bellhorn, and when Manny Ramirez singled to left, Damon was cut down at the plate on a relay, setting off a roar from the Yankees faithful. But that man again — Big Papi, David Ortiz — swung at the first pitch he saw and homered a couple of rows deep into the short porch in right field. It was 2-0 after the first inning, Red Sox starter Derek Lowe setting down the Yankees in order.7

Brown got Trot Nixon to ground out in the top of the second, but that was the only out he got. Kevin Millar singled, and then Brown walked Bill Mueller and shortstop Orlando Cabrera (on eight pitches). Torre made a move and beckoned in Javier Vazquez from the bullpen.8 Damon crushed the first pitch Vazquez threw for a grand slam to right field, giving the Red Sox a 6-0 lead. Any air of optimism Yankees fans were harboring evaporated. The crowd was “shell-shocked,” in the words of TV broadcaster Joe Buck.9 New York still had a chance to win, of course. They would bat for eight more innings, but the feeling was palpable: the resurgent Red Sox had fully risen from the dead and momentum was on their side. “The Red Sox couldn’t wait to get to the park today,” said Buck.

Lowe walked Jorge Posada in the bottom of the second inning but he was the only one to reach base. In the third, he hit Miguel Cairo — who then stole second base and scored on a single by Derek Jeter. The Yankees were on the board, but they trailed 6-1.

After Cabrera walked to lead off the top of the fourth, Damon came up again. He swung at the first pitch. Once more he homered, this time into the upper deck in right. Now it was 8-1. Damon had six runs batted in. Whatever small hope Yankees fans had taken from Jeter’s RBI, it was likely extinguished. Vazquez walked two of the next three batters, and was replaced by Esteban Loaiza. He gave up a single to load the bases, but then secured the final two outs.

The Yankees went down one-two-three in the fourth, with only a Bernie Williams fly ball to left leaving the infield. They went down in order in the fifth, and in the sixth, on a combination of groundouts and strikeouts. Not one ball left the infield.

The New York Times observed that the Stadium was starting to empty after the sixth.10 Considering the perhaps never-higher intensity of the Red Sox-Yankees rivalry in 2003 and 2004, Allan Wood has said the idea that Yankees fans would abandon their team in the last three innings of an ALCS Game Seven against the Red Sox was truly mind-blowing.11

The Red Sox still held a comfortable lead. Francona surprised everyone by bringing in Pedro Martinez to relieve Lowe in the bottom of the seventh. Martinez had apparently asked to be used in the game.12 On a 2-and-0 count, Hideki Matsui doubled to the right-field corner. On an 0-and-2 count, Bernie Williams doubled off the wall in center, scoring Matsui. Posada grounded out to first base, Doug Mientkiewicz (who took over for Millar) tossing to Pedro covering the bag. Williams ran to third base. Kenny Lofton singled up the middle into center, scoring Williams. The score was now 8-3. The New York crowd began to buzz as Lofton stole second. But Martinez struck out pinch-hitter John Olerud and got Cairo to fly out to right.

The Yankees were down to their last six outs.

Leading off in the top of the eighth, Mark Bellhorn homered off Tom Gordon, off the right-field foul pole, sending a statement of sorts. The Red Sox fans in the Stadium — many of the Yankees fans had bailed by this time — were exultant, boldly and loudly cheering their team.

Mike Timlin set down the Yankees in order in the bottom of the eighth; once more, not a ball left the infield.

In the top of the ninth, Nixon singled to left, Mientkiewicz dropped a single into left, and after Mueller hit a ball deep enough to center that Nixon could tag up and take third, Cabrera did the same thing: flied out to center, this time Nixon tagging up and scoring to make it 10-3. Joe Buck observed, “It’s the Red Sox fans making all the noise here at Yankee Stadium.”13

Matsui led off the bottom of the ninth with a single. He was forced out on a Bernie Williams grounder to short. After Posada popped up to short, Williams took second on defensive indifference — one run would hardly matter at this point. Lofton walked.

Francona bought in Alan Embree to take over from Timlin. Embree closed it out, inducing Ruben Sierra to ground out to Pokey Reese at second base, 4-3.

The Red Sox had done what just about everyone had believed was impossible — coming back to win the final four games of the best-of-seven ALCS.

It was the greatest comeback in baseball history.

Yankee Stadium became the scene of a raucous Red Sox celebration. The Boston Globe observed: “Thousands of Boston fans gathered in the stands behind the dugout and players tossed equipment and sprayed champagne into the stands while the throng chanted, ‘Let’s go, Red Sox!’”15

“Mark it down,” wrote Dan Shaughnessy in the Globe. “October 20. It will always be the day that Sox citizens were liberated from 8½ decades of torment and torture at the hands of the New York Yankees and their fans.”16

Derek Lowe, pitching on only two days of rest, had worked six full innings and allowed just one base hit. He got the win, of course. He had gotten the win in the deciding game of the AL Division Series. And, it would turn out, he was also the winning pitcher in the clinching game of the World Series.

The Red Sox continued to ride the momentum they had generated, sweeping the St. Louis Cardinals in four games in the World Series. It was the first of four championships the Red Sox won between 2004 and 2018. The Yankees won the 2009 World Series, winning the title in their first season in a new ballpark, just as they had back in 1923, in the first year of the original Yankee Stadium.

In addition to the sources cited in the Notes, the author consulted Baseball-Reference.com and Retrosheet.org. For a comprehensive oral history of the Red Sox 2004 postseason, see Allan Wood and Bill Nowlin, Don’t Let Us Win Tonight (Chicago: Triumph Books, 2014), which draws on 59 interviews with Red Sox players, personnel, and others.

1 The Red Sox hadn’t won a World Series since 1918, while the Yankees had won more than any player had fingers (and toes) that could sport world championship rings. The Red Sox had played a Game Seven in four World Series (1946, 1967, 1975, 1986), and lost all four times. They had also lost a one-game playoff in 1978 to determine the winner of the AL East, and in 1949 they had needed to win only one of the final two games of the season against the Yankees to win the pennant, but lost both.

2 In the 1942 Stanley Cup Final, the Toronto Maple Leafs lost the first three games to the Detroit Red Wings, but then won four in a row; the 1975 New York Islanders had also come back from an 0-3 deficit.

5 The Yankees had lost to the Florida Marlins in the 2003 World Series. The last Series they had won was in 2000, the last year of the twentieth century. For the Red Sox, it had been 86 years.

6 The 2004 Red Sox called themselves the Idiots, a moniker reflected in at least three book titles in 2005: Idiot: Beating “The Curse” and Enjoying the Game of Life by Johnny Damon with Peter Golenbock (Crown), Emperors and Idiots by Mike Vaccaro (Doubleday), and Idiot-Syncrasies by A. Knoefel Longest (Adams Media). In 2014 Ian Browne’s book Idiots Revisited (Tilbury House) also used the word.

8 Vazquez was a righty and a starter who had been 14-10 in the regular season. He was also the Game Three winner in the ALCS, replacing Brown, who had given up four runs in the second inning of that game.

15 Boston Globe, October 21, 2004: C11. A photograph caption on the page read, “Yankee Stadium is overrun by Red Sox Nation.” The champagne the Yankees had expected to pop after either Game Four or Game Five had remained unopened.