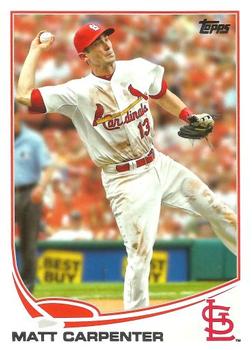 The St. Louis Cardinals evened things up, winning Game Two of the 2013 World Series, 4-2, and ending Boston’s five-game World Series winning streak over St. Louis, dating back to their sweep in 2004.

One could well say that rookie right-hander Michael Wacha was the star of the game for St. Louis. After debuting with three starts in May and June 2013, the 22-year-old Wacha joined the Cardinals to stay in mid-August and posted a 4-1 (2.78) regular-season record. He entered the World Series with an unblemished 3-0 record in the 2013 postseason, claiming a 2-1 win over the Pirates in Game Four of the NL Division Series, a 1-0 blanking of Clayton Kershaw and the Dodgers in Game Two of the NCLS, and a series-clinching 9-0 win against Kershaw in Game Six. In 21 postseason innings, he’d allowed just one earned run. He was the MVP of the NLCS. And he allowed Boston only two runs in this one.

Starting for the Red Sox was John Lackey. The right-hander had pitched eight years for the Angels and won 102 games. As a free agent, he’d signed with the Red Sox in December 2009. He recorded seasons of 14-11 and 12-12 in 2010 and 2011, with relatively high earned-run averages. Lackey had Tommy John surgery after the 2011 season and missed all of the Red Sox last-place campaign in 2012. Returning to action in 2013, he posted his best year for Boston; despite a 10-13 record, his ERA was 3.52. He’d pitched well in 14 postseason games for the Angels. In 2013 he won both games he pitched in the postseason — a 7-4 Game Two win in the Division Series and a 1-0 win in Game Three of the ALCS.

Neither team scored over the first three innings. Right fielder Carlos Beltran — who returned to play after a rib injury, sustained while robbing David Ortiz of a grand slam, sidelined him early in Game One — singled for St. Louis in the first and catcher Yadier Molina led off the top of the second with a single. Neither advanced even the 90 feet to second base.

For Boston, first baseman Mike Napoli walked in the second inning and center fielder Jacoby Ellsbury singled in the bottom of the third. Neither of them got to second base, either.

St. Louis scored first, in the top of the fourth. Leading off the inning, left fielder Matt Holliday tripled to center field, the ball caroming off the side of the Red Sox bullpen and shooting well away from Ellsbury. First baseman Matt Adams hit a ball that could well have scored Holliday, but Dustin Pedroia speared it with a diving, backhand catch for the first out. Yadier Molina drove a ball hard into the ground about seven feet in front of the plate, high-hopping over Lackey’s head. Pedroia’s only play was to first base as Holliday scored from third. After a walk, Lackey got the third out.

Pedroia doubled off the top of the scoreboard on Fenway’s left-field wall to lead off the Red Sox fourth. Ortiz walked to put two on with none out, but Mike Napoli hit into a double play, Pedroia taking third base. Jonny Gomes popped up to Matt Carpenter at second base. The score remained 1-0, St. Louis.

Neither team scored in the fifth; the only baserunner was Jarrod Saltalamacchia, who drew a walk from Wacha.

Matt Adams hit a two-out single in the top of the sixth. He stayed put.

The Red Sox took the lead in the bottom of the sixth inning. Dustin Pedroia drew a one-out walk. On a 3-and-2 count, David Ortiz hit an opposite-field homer into the first row of the Monster seats in left field. It was Ortiz’s 17th career postseason home run. The score was 2-1, in Boston’s favor. Wacha got the next two batters. Six innings were in the books.

The Cardinals wasted no time in reclaiming the lead in the seventh. Lackey struck out the leadoff man, designated hitter Allen Craig, on three pitches. On eight pitches, Freese walked. Jon Jay lined a single to right, Freese moving up to second.

Manager John Farrell called on Craig Breslow in relief of Lackey. “Maybe he was due for a stinker,” commiserated Nick Cafardo of the Boston Globe. Breslow was coming off “seven straight scoreless appearances this postseason” and “no reliever can pitch that well for that long.”1 Pete Kozma pinch-ran for Freese and the Cards pulled off a double steal, putting runners on second and third with one out. Shortstop Daniel Descalso walked, loading the bases.

Matt Carpenter was up. He’d led the major leagues with 199 base hits in the regular season but was batting .167 in the postseason. He hit a fly ball to left field; Jonny Gomes made the catch and threw to the plate, but not in time to get Kozma. Tie score — but Gomes’s throw was a little off to the first-base side of the plate and the ball glanced off Saltalamacchia’s glove. An aggressive Jay ran for third.

Breslow had run behind the plate to back up Salty. He picked up the ball and rushed a throw to third, hoping to beat Jay there. It sailed high, all the way into the seats down the third-base line, and Jay scored. There were two errors on the play — one by the catcher and one by the pitcher. The Cardinals had tipped the balance the other way and now led 3-2. They added another run when the next batter, Beltran, singled to right field for his second hit of the game. It was now 4-2, St. Louis. Junichi Tazawa relieved Breslow and got Holliday to ground out.

Carlos Martinez took over for Wacha and set the Red Sox down in order in the seventh.

Brandon Workman worked the top of the eighth for Boston, allowing a two-out single to Craig, but no more.

Martinez came back out for the Cardinals. Ellsbury reached on an error by second baseman Carpenter. Martinez struck out Shane Victorino and Pedroia. Ortiz reached on an infield single to put the tying run on first, but Napoli popped up to shortstop.

Koji Uehara pitched the top of the ninth for the Red Sox. He got three outs.

With the Red Sox down to their last three outs, Trevor Rosenthal relieved Carlos Martinez. He faced Gomes, Saltalamacchia, and pinch-hitter Daniel Nava (batting for Stephen Drew), and struck out all three. The game was over, and the Cardinals had evened the Series at one win apiece. Both teams prepared to head to St. Louis for Games Three, Four, and Five. The Cardinals looked to have a true home-field advantage there.2

In this game, it was the Red Sox who played a little too loosely, particular on the two-error play in the top of the seventh. Stephen Drew said, “It’s unfortunate, but it’s the same thing as (Game One). We capitalized on (their mistakes) and they capitalized on (ours) tonight.”3 Saltalamacchia said, “It just popped out of my glove.” And Breslow said, “The ball kind of sailed on me. I looked up and saw I definitely had a play there and didn’t make a good throw. … I felt it was definitely worth making the throw.”4

The rookie, Michael Wacha, had proved more than the Cardinals’ understudy to Adam Wainwright,” wrote Joe Strauss. “He is this postseason’s firewall. … The Cardinals have eight playoff wins. Wacha owns four.”5

Lackey bore the loss. He said, “The margin of error is really slim this time of year. [We] kind of let one go tonight, but we’ll be back the next one.”6 That’s how Saltalamacchia saw the first two games: “We’re human. It happens. We saw them do the same thing last night. They shook it off, came out and played well. That’s what we’re going to do.”7