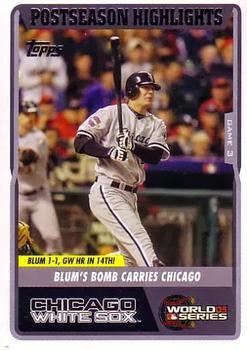 For the first time in World Series history, the fall classic was coming to the Lone Star State, Texas, but things weren’t looking good for the team hosting the game. The National League champion Houston Astros came back to Minute Maid Park down two games to none to the American League champion Chicago White Sox.

The White Sox had seized the upper hand by rallying for a 7-6 win in Game Two on Paul Konerko’s seventh-inning grand slam and Scott Podsednik’s ninth-inning walk-off home run. This put Phil Garner’s Astros in must-win territory while Ozzie Guillen’s White Sox found themselves two wins away from their first title in 88 years, double the number of seasons that Houston had waited to even reach the fall classic for the first time. The team from Chicago’s South Side had last played in the World Series in 1959, three years before the Astros’ inaugural season.1

Commissioner Bud Selig ordered the Astros to open the roof of Minute Maid Park at the game’s start. The Astros objected, claiming they had a better record when playing with the roof closed.2 Selig’s office said the order was based on rules established by Houston and consistent with previous practice and the evening’s weather forecast.3

In the early innings, all the momentum seemed to be on Houston’s side as Lance Berkman drove in Craig Biggio in the bottom of the first with a double. The hit made Minute Maid Park come alive, and the train above the Crawford Boxes4 in left field took its celebratory ride, as it does every time the Astros add to their run total.

The White Sox threatened in the top of the second by putting their first two men on base on a double by Konerko and a walk to A.J. Pierzynski, but a double play and a foul out put an end to that. In the bottom of the third, RBI singles by Biggio and Morgan Ensberg put the Astros ahead 3-0. The lead could have been greater, but the Astros left two men on base to end the inning.

Jason Lane added to Houston’s lead in the fourth with a leadoff solo home run to left-center field, his drive striking the perpendicular yellow line where Minute Maid Park’s wall juts out in left-center field and clearing the wall’s parallel yellow home-run line.

In the fifth inning, the momentum suddenly shifted to the White Sox, who lived up to their “Win or Die Trying” mantra of 2005. Joe Crede led off the inning with a home run to put Chicago on the board. After singles by Juan Uribe and Podsednik, sandwiched around a strikeout by Garland, Tadahito Iguchi and Jermaine Dye hit back-to-back RBI singles to put the White Sox within one, 4-3. Catcher A.J Pierzynski hit a double to Tal’s Hill5 in deep center field to score Iguchi and Dye and give Chicago the lead. In their five-run fifth inning, 11 White Sox came to the plate and Oswalt threw 46 pitches.

The score remained 5-4 in favor of the White Sox until the bottom of the eighth. The Astros’ Ensberg and Mike Lamb drew two-out walks, and Guillen brought in his closer, Dustin Hermanson. But Jason Lane smashed a Hermanson pitch down the third-base line for a game-tying double; Uribe hustled over from shortstop to recover the carom off the left-field stands and hold pinch-runner Eric Bruntlett at third. That brought Minute Maid Park alive again, but Brad Ausmus took a called third strike to end the inning, stranding the runners on second and third.

In the bottom of the ninth, the Astros had Chris Burke on third after an error and a stolen base during Biggio’s at-bat. With only one out, it looked as though Houston was about to win its first World Series game. But Orlando “El Duque” Hernandez struck out Willy Tavares, gave an intentional walk to Lance Berkman, and fanned Ensberg to end the threat and send the game into extra innings.

The tie was finally broken in the 14th inning. Former Astro Geoff Blum, batting after Konerko had extinguished a potential threat by hitting into a double play, hit a 2-and-0 pitch from Ezequiel Astacio into the right-field stands to give Chicago a 6-5 lead. The White Sox added another run with back-to-back infield hits from Aaron Rowand and Crede, followed by back-to-back walks to Uribe and Chris Widger. With two out and two on base in the bottom of the inning, the Astros attempted to make a comeback, but Adam Everett popped up to shortstop to end the game and give the White Sox a 3-0 lead in the World Series. Damaso Marte earned the win, while Astacio took the loss and Mark Buehrle earned the save.

The White Sox completed their sweep in Game Four in a defensive battle. They scored the only run of the game and Uribe made two amazing plays in the final inning to give Chicago’s South Side its first moment of joy in 88 years. For Houston fans, it was disappointing to finally get to the World Series only to be swept.

Blum said of his home run: “It’s the stuff that dreams are made of. I’ve had about 100 of these at-bats in the backyard with my younger brother.”6

As of the end of the 2020 season, the White Sox have not returned to the World Series since and have made only two postseason appearances following their 2005 title. As for the Astros, 2005 turned out to be their final postseason run as a member of the National League. Within two years of reaching the World Series, two of the best players in franchise history, Jeff Bagwell and Biggio, had retired. Major League Baseball realigned Houston to the American League in 2013, at the same time that a franchise rebuilding effort saw the Astros lose at least 106 games in three consecutive seasons.

Houston has made the World Series twice since 2005, winning in 2017 against the Los Angeles Dodgers in seven games—a title tainted by subsequent revelations that the Astros had illegally used video technology to steal signs—and losing to the Washington Nationals in 2019 in seven games.

Because of the Astros’ league switch, the 2005 World Series is now one of only two World Series in baseball history where a rematch is impossible, as both teams are now in the same league.7

1 The Astros franchise was established in 1962 as the Houston Colt .45s. The team changed its name to Astros in 1965.

4 They’re called the Crawford Boxes because they run parallel to Crawford Street, just outside the ballpark.

5 It was called Tal’s Hill because it was named after former president of the Astros, Tal Smith, who proposed its inclusion. The hill was removed in 2016.

6 This game went 14 innings, tied for the longest in World Series history until Game Three of the 2018 World Series, which went 18 innings.

7 The only other World Series where a rematch is impossible is the 1982 World Series between the Milwaukee Brewers and St. Louis Cardinals; the Brewers moved to the National League in 1998.