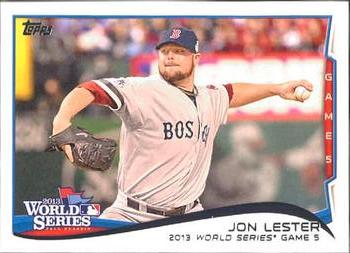 The pitching matchup for Game Five of the 2013 World Series was the same as for Game One — Adam Wainwright for the Cardinals and Jon Lester for the Red Sox. Lester had come out on top in that one, throwing 7⅔ scoreless innings while Wainwright had allowed five runs (two unearned) in five innings.

Game Five saw both pitchers perform very well through the first six innings. The score was 1-1 at that stage of the game.

The Series itself was tied, two wins for each team. After the weird ways in which the prior two games had ended, what was in store for Game Five, asked the Boston Globe’s Dan Shaughnessy: “Triple play, perhaps? Human sacrifice?”1

It didn’t take the Red Sox long to put a run on the board. In the first inning, Wainwright struck out leadoff batter Jacoby Ellsbury, but then Dustin Pedroia doubled into the left-field corner. The third man up was David Ortiz. He was playing in his 81st postseason game. He was 8-for-11 in the 2013 World Series, with five runs batted in. Swinging at the first pitch, Ortiz doubled, too, right over the first-base bag and under a diving Allen Craig, then bounding into foul territory. This bumped his Series average up to .750 and gave him a sixth RBI.

Other than the back-to-back doubles, Wainwright struck out the side. But it was 1-0, Red Sox.

Lester got two groundouts and a strikeout in the bottom of the first.

In the top of the second, Wainwright faced three Boston batters and struck out all three, each swinging at strike three. Two innings, six strikeouts.

Carlos Beltran led off the St. Louis second with a single, but Lester struck out Yadier Molina and then got Allen Craig to ground into a 6-4-3 double play.

Wainwright didn’t strike out anyone in the third, but he got a groundout, a foul popup to third base, and another groundout.

In the bottom of the third, David Freese singled and was sacrificed to second by Pete Kozma, but then Lester struck out Wainwright and Matt Carpenter.

Ortiz singled to lead off the fourth but didn’t get to second base, followed as he was by a fly ball to left and a double play.

Lester struck out leadoff batter Shane Robinson, but then gave up his first run of the World Series — a home run by Matt Holliday, over the fence and onto the “batter’s eye” grass in center field.2 The game was tied, 1-1.

The Red Sox got a couple of singles in the fifth but a fly ball was in between them, followed by two strikeouts. Wainwright didn’t allow anyone to reach base in the sixth. He even got Ortiz to line out to center field, ending Big Papi’s string of reaching base in nine consecutive plate appearances.

Lester didn’t allow a Cardinals batter to reach base in either the fifth or the sixth.

Wainwright struck out Daniel Nava, first man up in the seventh. Xander Bogaerts hit a ball that hopped over the mound and up the middle for a single.3 Shortstop Stephen Drew walked. Catcher David Ross came up, well aware that Lester was on deck behind him. On Wainwright’s 102nd pitch of the game, Ross hit a ball down the left-field line, into the corner and just fair by inches. It bounced into the seats for a book-rule double. The Red Sox took a 2-1 lead.

Lester was allowed to bat. Swinging away, he hit the ball to Wainwright. The runners had to hold, and Wainwright threw Lester out first base. Ellsbury came to bat; he was 0-for-3 against Wainwright so far. He flared a fly ball that dropped into shallow center for a hit. Drew scored, but Ross was erased on the throw to the plate. The Red Sox had scored two runs, though, and led the game 3-1.

Lester set down Holliday, Beltran, and Molina in the bottom of the seventh.

Carlos Martinez came in to pitch to the Red Sox in the top of the eighth. They got one hit, by … who else? David Ortiz. He grounded a ball to short right, forcing second baseman Matt Carpenter to range so far to field it that Ortiz beat his throw to first base.

Lester retired Craig, the first batter he faced in the bottom of the eighth. Then David Freese doubled right over the bag at first base. Pete Kozma flied out to left field. Lester’s night was done. He’d thrown 7⅔ innings and allowed just four hits and one run. He’d pitched back-to-back gems in Game One and Game Five. Teammate Ryan Dempster asked rhetorically, “How many times can you pitch the best game of your life?”4

Trevor Rosenthal was the new pitcher for the Cardinals. He replicated what Wainwright had done back in the second inning — faced three Red Sox batters (the same three batters — Bogaerts, Drew, and Ross) and struck out all three, each one on a swinging strike.

The game entered the bottom of the ninth. Uehara returned to the mound. He struck out Carpenter. Jon Jay pinch-hit for Shane Robinson and grounded out to first base, Uehara covering to take the throw. Holliday lined out to Nava in right field for the final out.

The Red Sox were definitely not overpowering the Cardinals. The team as a whole was hitting for a collective .205 batting average (not counting David Ortiz, they were batting .151), but the players were making the hits when they counted. The Cardinals were not. Left-handed pitching seemed to stifle St. Louis. It wasn’t just in the World Series; St. Louis Post-Dispatch writer Joe Strauss noted that “the Cardinals ranked 26th of 30 teams in on-base-plus-slugging percentage against lefthanded pitching,” or OPS. At this point, he observed, Matt Holliday was pretty much the team’s offense; Holliday had “four of his team’s nine extra-base hits and five of its 11 RBIs.”5

The two teams had wrapped up the three games at Busch, with the Red Sox on top in the Series, three games to two. The Red Sox were in a position — by winning either Game Six or a possible Game Seven — to win a World Series in front of the Fenway Park home crowd for the first time since 1918. It had been 95 years. And Jon Lester, with his win in this Game Five, was the first Red Sox left-hander to win three World Series games since Babe Ruth.6

It was revealed that Lester had been battling back tightness since the end of the regular season. He shrugged it off: “Stuff like that you just have to battle through. We’ve got 25, 28, however many guys in that dugout that are relying on you to go out and pitch innings, and whatever it is now, you’ve got to put on the back burner, just like [Clay Buchholz] did [Sunday]. We’ve got three months to recover. The time is now. We’ve got to win now.”7

“He’s our backbone,” said Red Sox catcher Ross. “He’s our horse when he’s out there. He’s pitching like the ace he is. I love catching him.”8

Ross reflected on his game-winning hit with a degree of awe. “There’s a reason why I hit in the 8-hole and the 9-hole. I’m not very good at hitting. … It definitely hasn’t sunk in. There’s no way to get too excited. … We still have a lot of work to do. I’m worried about Game 6 already. There’s a pit in my stomach.”9

The Cardinals weren’t prepared to give up yet. “There’s no sugarcoating this. It’s a tough loss,” said leadoff hitter Matt Carpenter. “We had three games at home and we lost two of them.” He promised the offense would get going: “It will be an absolute dogfight the next two games.”10

Manager Mike Matheny said, “You know, our guys have been backed up against the wall before, and this is something that isn’t foreign to them. … I think it starts with a mentality that it’s a great challenge. It’s a great opportunity for us to go in and prove the kind of team we are as far as how tough we are mentally, and I think that’s where it begins.”11

Bernie Miklasz knew it wouldn’t be easy, writing, “Over the past 78 seasons of major-league baseball, only four teams have gone on the road down 3-2 and won the final two games to seize the World Series title.”12

2 It was Holliday’s second home run of the World Series. At Series end, his two homers were the only two hit by the Cardinals.

6 Ruth had won Game Two in 1916 and Games Two and Four in 1918. Lester had won the clinching Game Four in the 2007 World Series, before his Game One and Game Five wins in 2013. His earned-run average for his three World Series games was 0.43. In 2016 he was part of the world champion Chicago Cubs, losing Game One of that year’s World Series and then winning Game Five.

12 Miklasz. The last time a team had won Games Six and Seven on the road was in the 1979 World Series, when the Pirates pulled off the feat against the Orioles. Miklasz criticized Cardinals GM John Mozeliak for having “wasted two roster spots” on pitchers Shelby Miller and Edward Mujica, neither of whom was ever used, rather than keeping a third catcher. He wrote, “This nonsensical roster makeup means Tony Cruz is unavailable as a pinch-hitter. He’s the only backup to catcher Yadier Molina and must be held in reserve in the event of injury.” Miller had been 15-9 with a 3.06 ERA in the regular season. The Cardinals had decided to keep him available for long relief, or as a backup starter, but he never pitched at all in either the NLCS or World Series. Miller wasn’t sure why he wasn’t used. “There could be something that I don’t know about going on.” See Derrick Goold, “Series Ends eith Miller Remaining Idle,” St. Louis Post-Dispatch, October 31, 2013: W6.