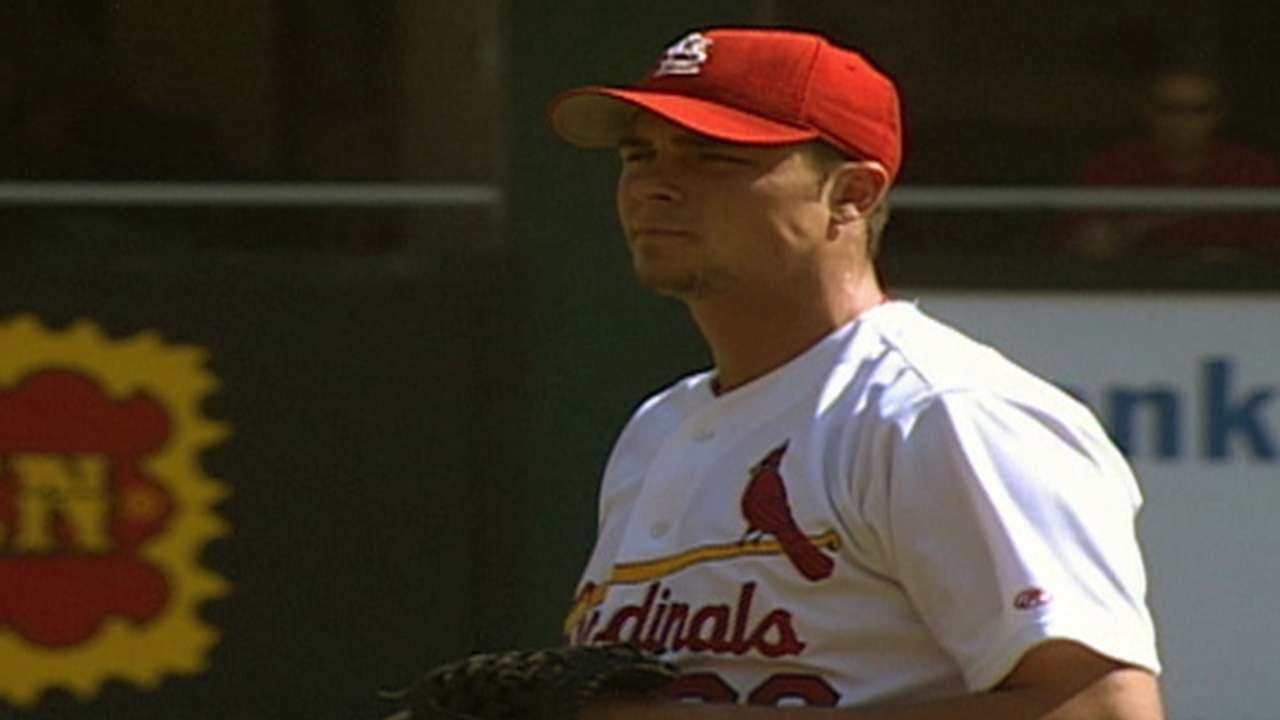 “I was not hurt. I was not afraid. I was not sick or distracted or particularly anxious,” he wrote 17 years later. “In game one of the National League Division Series, on a warm and sunny afternoon with a slight cross breeze, in front of exactly 52,378 people, including my mom, I stood on the mound at Busch Stadium, convinced I would be great. That it was my destiny.”1

Although Ankiel was preparing to face an Atlanta Braves lineup that won 95 games during the regular season and had future Hall of Famer Greg Maddux taking the mound opposite him, it was no surprise that Ankiel was confident. After all, the native of Port St. Lucie, Florida, had known nothing but success in his young career.

Three years earlier, USA Today had named him its High School Player of the Year after he struck out 162 batters in 74 innings his senior season. He followed that success with Minor League Player of the Year awards from USA Today and Baseball America in 1999.2 Ankiel entered the 2000 season as Baseball America’s top-rated prospect and had lived up to expectations, going 11-7 with a 3.50 ERA as a rookie. In 175 innings, he had struck out 194 batters.

Now he was headed to the postseason. During the final weeks of the regular season, the Cardinals’ pitching staff was wearing down. Garrett Stephenson was battling soreness in his arm. Andy Benes battled the same in his knee. Pat Hentgen was tiring. That left Ankiel and staff ace Darryl Kile to carry the bulk of the postseason pitching load.

As Cardinals manager Tony La Russa and pitching Dave Duncan examined the postseason schedule, they came to a decision that haunted La Russa more than any other in his managerial career.3 By starting Ankiel in Game One, the Cardinals could pitch the rookie again in Game Four on four days’ rest. Kile could then pitch Game Two and, if necessary, Game Five on just three days’ rest, a challenge the Cardinals felt the veteran was better equipped to manage.4 The Braves were using a similar strategy, lining up Maddux to pitch Games One and Four opposite Ankiel and Tom Glavine to pitch Games Two and Five against Kile.

The downside of the plan was that Ankiel, who at 21 was the second-youngest pitcher to start Game One of a playoff series,5 would face the added pressure of pitching against Maddux, who had won 19 games during the regular season and was starting his 24th playoff game. The Cardinals had done everything they could to protect Ankiel from the pressure of the Game One start, even going so far as to send Kile to meet with the media the previous day, giving the impression that the veteran would start the opener.6 La Russa called Braves manager Bobby Cox that evening to tell him that Ankiel, not Kile, was slated to start Game One for the Cardinals.7

Making Ankiel’s task even harder was the absence of veteran catcher Mike Matheny, who 11 days earlier cut his hand on a Bowie knife his brother sent him as a birthday gift. Instead, Carlos Hernandez, who was battling back tightness that led to surgery after the season,8 was behind the plate.

Ankiel appeared to have routine playoff-debut jitters in the first inning. Fellow rookie Rafael Furcal led off the game with a single that just eluded a diving Jim Edmonds in the right-field gap. Ankiel struck out Andruw Jones on three pitches and Furcal was caught stealing for the second out, but Ankiel walked Chipper Jones and Andres Galarraga before finally getting Brian Jordan to hit a pop fly to first baseman Will Clark in foul territory.

The Cardinals’ lineup tried to provide Ankiel comfort in the bottom half of the inning. St. Louis’s first four hitters singled, Ray Lankford reached on an error, Edgar Renteria laid down a sacrifice bunt, and Hernandez received an intentional walk. With the bases loaded and one out, Placido Polanco singled through the middle, scoring Lankford and Renteria, and Hernandez scored on a throwing error after Braves catcher Paul Bako tried to throw Polanco out at second base. By the time Ankiel took the mound for the second inning, he had a 6-0 lead to work with.

Ankiel struck out Reggie Sanders on a high fastball to start the second inning, then benefited from good fortune after Walt Weiss’s ground-rule double bounced over the right-field wall. Javier Lopez entered the game in place of Bako and lined a shot that appeared destined for left field, but Renteria dived to snag the ball and doubled up Weiss at second base.

Ankiel received no such luck in the third inning.

He walked Maddux to lead off the inning and jammed Furcal on an inside fastball to produce an infield pop fly. But on his 44th pitch of the afternoon, Ankiel threw a curveball that broke into the dirt, skipping past Hernandez and back to the screen.

“I held on to the ball too long. Tried not to hang the curveball. Didn’t exactly trust it. Rushed it,” Ankiel wrote in his 2017 autobiography. “Instead of flicking the outer inches of the strike zone, I launched the pitch too far right. It came out of my hand, off my fingers, all wrong. Hernandez lunged to his left. The ball bounced near Jones’s feet and past Hernandez’s shoulder, and Maddux loped to second base. The ball hit the backstop. Hernandez chased it. And I stood near the front of the mound and watched all of it happen, sort of curious.”9

On the next pitch, Ankiel and Hernandez got crossed up, forcing Hernandez to awkwardly catch a curveball. The pitch after that hit the backstop on the fly.

Andruw Jones walked one pitch later. He advanced to second when Ankiel’s fifth pitch to Chipper Jones sailed over Hernandez, who had leaped into the air in a desperate attempt to corral the pitch. Ankiel struck Chipper Jones out on a nasty inside curveball, but one pitch later Hernandez needed to leap out of his crouch to prevent another fastball from reaching the backstop.

With Galarraga at the plate, Ankiel uncorked another heater well over Hernandez’s head, plating Maddux with his fourth wild pitch of the day. After Galarraga walked, Jordan singled to left field on Ankiel’s first pitch to him. Sixteen years later at a Cardinals fantasy camp, Ankiel embraced Jordan and told him that the hug was his way of thanking him for swinging at that initial offering.11

During the game, however, the rookie found no such humor. Ankiel threw his fifth wild pitch of the inning before walking Jordan to load the bases. After Weiss singled to left field to score Galarraga and Jones, making the score 6-4, La Russa mercifully emerged from the dugout to rescue him.

Within the span of 20 pitches, five had reached the backstop, making Ankiel the first pitcher to throw five wild pitches in an inning since Bert Cunningham for the Buffalo Bisons of the Players’ League on September 15, 1890.12

“I guess at least I set a record,” Ankiel said after the game.13

Mike James retired Lopez for the final out of the inning, then threw two more scoreless innings to earn the win. Edmonds led off the Cardinals’ half of the fourth inning with a home run over the right-field wall, and from there the game was placed in the hands of the bullpen. Mike Timlin threw one scoreless inning, Britt Reames threw two, and Dave Veres worked around an unearned run to earn the save.

The Cardinals went on to sweep the best-of-five series, scoring 24 runs in three games, but their prized left-hander was never the same. In Game Two of the National League Championship Series against the New York Mets, Ankiel threw just two-thirds of an inning, walking three and throwing two wild pitches.

In the years to come, the Cardinals attempted a variety of solutions to get Ankiel back on track, even sending him down to rookie ball. None of it worked. Finally, in 2004, Ankiel told the Cardinals he was retiring. A few hours later, after a conversation between St. Louis general manager Walt Jocketty and Ankiel’s agent, Scott Boras, the Cardinals assigned Ankiel to the minors — as an outfielder.

1 Rick Ankiel and Tim Brown, The Phenomenon: Pressure, the Yips, and the Pitch That Changed My Life (New York: Public Affairs Books, 2017), 6.