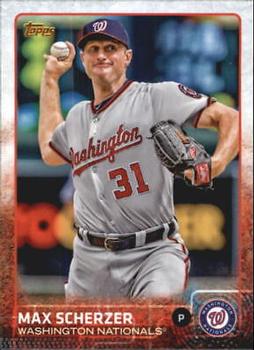 The New York Mets needed wins. They had won the 2015 National League East title but wanted home-field advantage against the Dodgers in the Division Series. Entering the next-to-last day of the regular season at 89-70, they were a half-game behind the Dodgers (90-70) in the race for the NL’s second seed.1

Due to inclement weather the day before, the Mets and Washington Nationals were playing a Saturday day-night doubleheader. Although the weather was no longer “inclement,” no one would have called it “good weather for baseball,” either. For the second game, the temperature was 53 degrees with a 24 MPH wind gusting to 35, which was loud enough to be picked up by the TV cameras. The umpires were wearing so many layers that they resembled black-clad versions of the Michelin Man. This did not discourage the fans – there were 41,480 in attendance, exceeding the 39,465 for the day game of the doubleheader.

The Nationals, second in the division but eight games behind the Mets, were already eliminated from the postseason, but they weren’t phoning in their last games by any means. They won the first game of the doubleheader, 3-1, on Bryce Harper’s eighth-inning two-run homer. After Washington’s Clint Robinson homered in the seventh, Harper, hitless in the game at that point, asked to use Robinson’s bat. Apparently, the bat had another homer in it – Harper, capping his NL MVP-winning season, deposited the ball in the upper deck. That loss dropped the Mets another game back of the Dodgers, putting more pressure on pitcher Matt Harvey to deliver a victory in the evening game. Unlike some teams that were resting their regular players in advance of the postseason, the Mets played most of their regulars.2

Harvey (13-7, 2.80 ERA) took the mound for the Mets, making his 29th start of the year. Pregame information given to the TV broadcasters indicated that Harvey would pitch five innings as a tune-up to be ready for the third game of the Division Series. After a couple of bad games at the beginning of September,3 he had 11 days rest and returned to pitch two good games. There was some controversy about the number of innings he should be allowed to pitch, given that 2015 was his first year back from Tommy John surgery. But he said he wanted to pitch, and pitch he did.4 He certainly appeared in top form to start the game, striking out Trea Turner and Yunel Escobar for the first and third outs of the inning. Michael A. Taylor was out on a foul pop behind the plate – catcher Kevin Plawecki fought the wind to make a lunging grab for the out.

Max Scherzer (13-12, 2.91 ERA) was making his 33rd5 start of the year, his first year of a seven-year contract with the Nationals. Unlike most of the players, he was not wearing a long-sleeved undershirt. Starting a familiar pattern, he struck out Curtis Granderson and Rubén Tejada. Michael Conforto grounded out.

Harvey struck out the side in the top of the second.

In the bottom of the frame, Michael Cuddyer hit one deep to left, but Tyler Moore tracked it down. Kelly Johnson bounced gently to Robinson at first and Kirk Nieuwenhuis struck out.

Harvey struck out Moore to start the third. He lost his chance at a no-hitter when rookie Wilmer Difo hit a grounder and slid in to first base headfirst. Difo was called out, but the replay officials determined that his fingers just beat Harvey’s foot to the bag, giving the 23-year-old Difo his second career hit.6 Scherzer bunted back to Harvey, who threw to second for the force out, but Tejada couldn’t turn a double play. Turner singled to put two on, but Taylor grounded out to end the threat.

In the bottom of the third, Dan Uggla, playing in his final major-league game, took over at second base from Difo, who had apparently hurt his hand on the slide into first. Plawecki led off the inning. On the fifth pitch of his at-bat, with the count 2-and-2, the 24-year-old rookie started to walk back to the dugout, catcher Wilson Ramos started to throw the ball around the infield, and Scherzer stalked off the mound as he usually would post-strikeout. To everyone’s surprise, the umpire called it a ball, so everyone returned to their positions. Plawecki looked at strike three (four?) for the first out. Dilson Herrera struck out and Harvey grounded to first – only jogging about 15 feet before returning to the dugout.

Both pitchers worked one-two-three innings in the fourth, each collecting another strikeout. The Nationals broadcaster F.P. Santangelo mentioned “same seats, everyone”7 for the first time at the end of the fourth.

Harvey got two more quick strikeouts to start the fifth, then hit Uggla with a pitch on the back of his hand. That brought up Scherzer, who was 1-for-5 lifetime against Harvey. He increased that to 2-for-6 with a single into the center-right gap, advancing Uggla to third. But Turner struck out to leave him there, keeping the game scoreless.

Scherzer collected a groundout and two more strikeouts in the bottom of the fifth.

Despite the earlier statements by the broadcasters regarding Harvey, he returned at 71 pitches for the top of the sixth. Taylor grounded toward third, and Johnson misplayed the ball for an error. One out later, Robinson singled to center, moving Taylor to third. Ramos flied to center, deep enough for Taylor to tag up and score the first run of the game. Matt den Dekker was Harvey’s 11th and final strikeout on his 91st pitch.

Scherzer lost his perfect-game bid one batter into the sixth, when Plawecki grounded to third and was safe at first on Escobar’s throwing error. With Plawecki on first and one out, and the Citi Field crowd cheering, Daniel Murphy pinch-hit for Harvey. Murphy had been on a tear lately, batting .298 for September.8 The crowd was disappointed – Murphy grounded to second, erasing the lead runner. Curtis Granderson was Scherzer’s ninth strikeout.

Hansel Robles took over the pitching for the Mets in the top of the seventh. Uggla’s one-out homer gave the Nationals a 2-0 lead. It was only the 35-year-old Uggla’s second homer of the year.9 Robles struck out the next two batters.

Scherzer needed only a dozen pitches to strike out the side in the seventh. As usual, he stalked off the mound after each strikeout. After pitching each inning, he neither sat nor paced in the dugout – instead, he dropped off his glove and headed down into the clubhouse.

Erik Goeddel returned the favor in the top of the eighth, striking out the Nationals in order for seven consecutive Nationals outs by strikeout.

Scherzer collected his 13th, 14th, and 15th strikeouts in the eighth. He was approaching his record for strikeouts in a game – 16, in a one-hitter against Milwaukee on June 15, 2015. Sprinkled among the Mets fans there were a few well-bundled-up Nats fans cheering in each strikeout.

Carlos Torres was the fourth Mets pitcher in the top of the ninth. He needed only eight pitches to send the Nationals back to their dugout, notching the Mets’ 18th strikeout in the process.

On to the bottom of the ninth. Fans of both teams started pulling out their phones. In case history happened, they wanted to be ready – no matter the wind chill.

The crowd cheered Yoenis Céspedes, pinch-hitting for Herrera. He was 2-for-3 against Scherzer in 2015. He battled but struck out on the seventh pitch.

Lucas Duda, pinch-hitting in the pitcher’s spot, was Scherzer’s 17th strikeout. Not only had Scherzer struck out nine in a row, he had set a new personal record for strikeouts in a game.10

One more out to go. The TV camera caught Trea Turner grinning broadly. He had not yet made his major-league debut with the Nationals when Scherzer threw his first no-hitter11 on June 20, a little over three months earlier, and here he was in only his 26th major-league game, one out from history.

Granderson was the last batter between Scherzer and the record books. On the fifth pitch of the at-bat, he hit a broken-bat popup to Escobar on the infield. The Nationals rushed to Scherzer to celebrate, with the Mets fans booing in the background.

As in his first no-hitter, Scherzer had not walked anyone, so only Escobar’s error stood between him and a perfect game.12 Scherzer commented on it after the game, saying that he understood how cold it was and that infielders’ hands were cold.13

The 18 strikeouts recorded by the Mets and the 17 by Scherzer set a record: As of 2021, this was the only nine-inning game in which each team recorded 17 or more strikeouts.14

The loss ensured that the Mets finished behind the Dodgers, but the lack of home-field advantage did not impair their postseason prospects. They beat Los Angeles in the NLDS, three games to two, then swept the Chicago Cubs – themselves survivors of lower seedings in the wild-card Game and NLDS – in the NLCS. But that was the end of their run – the Mets lost to the Kansas City Royals in five games in the World Series.15

The following February at spring training, the author chatted with Max in Viera, asking him, “So, when’s the next no-hitter?” He replied, “Don’t know – there’s too much luck involved.” The baseball below, from the ninth inning Céspedes at-bat, is in the author’s collection. 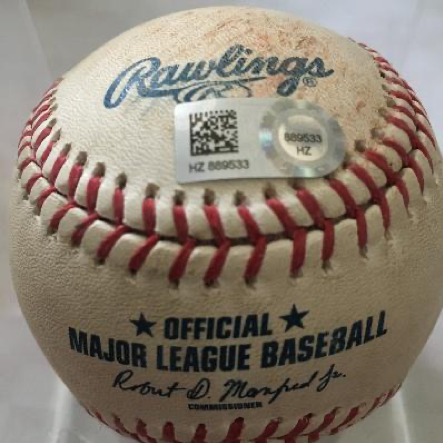 In addition to the sources in the Notes, the author watched the game on YouTube: https://www.youtube.com/watch?v=fJz0zDLmTTc.

1 The St. Louis Cardinals, NL Central champions, had clinched the first seed and were waiting to play the winner of the wild-card game between the Pittsburgh Pirates and Chicago Cubs.

2 The only exception was that Dilson Herrera was playing second base instead of Daniel Murphy.

5 The most starts for a National League pitcher in 2015.

7 One of many baseball superstitions is that if a pitcher is throwing a no-hitter, everyone should continue doing what they were doing (i.e., sitting in a particular seat) so as not to jinx the no-hitter. As a former player, Santangelo would have been familiar with the phrase. See, e.g., Tommy Lasorda in Jerry Reuss’s June 27, 1980 no-hitter.

8 Murphy’s excellent fall continued into the Mets postseason – he had an OPS of 1.115 and was named the NLCS MVP. However, the Mets did not extend him an offer at the end of the 2015 season, and he signed with the division rival Nationals.

9 His first homer of the year for the Nationals was a memorable one – the game-winning homer in an unexpected comeback. This, the final homer of his career, was his 235th.

12 Scherzer’s game score (using the Bill James formula) was 104, the second-highest game score recorded as of the end of the 2021 season. https://en.wikipedia.org/wiki/Game_score. Accessed October 31, 2021.