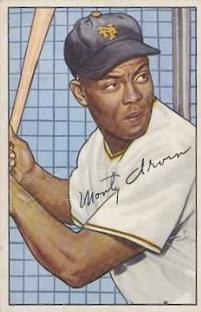 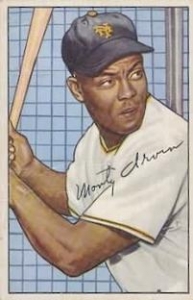 The rhetorical question encapsulated Irvin’s stellar game at the plate, as his New York Giants continued their momentum from a late-season surge that had culminated in Bobby Thomson’s Shot Heard Round the World in the deciding third game of the National League playoff series with a 5-1 victory over Berra’s New York Yankees at Yankee Stadium on October 4.

The Giants, who won 39 of their final 47 regular-season games after August 11 to overcome a 13-game deficit in the NL standings, had celebrated their dramatic pennant-clinching victory over the Brooklyn Dodgers, but it came with a cost. Regular right fielder Don Mueller injured his ankle sliding into third during the final playoff game, forcing manager Leo Durocher to play reserve Hank Thompson in Game One, one day later.2 With Thompson in right field, rookie Willie Mays in center, and National League RBI leader Irvin in left, the Giants became the first team in World Series history to start three Black players in the outfield, in the fifth season after Jackie Robinson broke baseball’s color line in 1947.3

Allie Reynolds started the series opener for the Yankees, who were seeking their third consecutive title after beating Brooklyn in 1949 and the Philadelphia Phillies in 1950. Reynolds had another outstanding season in 1951, with 17 wins, 8 losses, and a third-place finish in the American League’s MVP voting. Of those 17 wins, seven were complete-game shutouts – and two were no-hitters. His most recent appearance before the World Series, a start against the Boston Red Sox on September 28, was the second no-hitter.4 The Yankees’ 98 wins left them five games ahead of the second-place Cleveland Indians and equaled the Giants’ total of regular-season and playoff victories.

On the mound for the Giants, facing their cross-city rivals in the World Series for the sixth time, was left-hander Dave Koslo, who owned a record of 10 wins and 9 losses. Koslo was considered a surprise choice, given the fact that he had not started in two weeks.5 The Giants pitching staff of Sal Maglie, Larry Jansen, Jim Hearn, and Sheldon Jones was worn down from the pennant race; Game One of the World Series was the Giants’ sixth consecutive day with a high-stakes game, including two must-win games at the end of the regular season and three playoff games in three days. Hearn had pitched a complete game in the first game of the playoff against the Dodgers on October 1 with a strained ligament in his side.6 A day later, Jones started the second game to give Maglie time to rest his sore shoulder. In the final game, Maglie pitched eight innings before being relieved by Jansen, who pitched a scoreless ninth and was credited with the win after the Giants’ dramatic rally.7

All concerns about wear and tear on the pitching staff aside, newspaper coverage suggested that Durocher had a strategic purpose for starting Koslo against the Yankees. Giants scouts noted that another left-hander, Philadelphia’s Bobby Shantz, had pitched well against the Yankees in 1951.8

The Giants got off to a fast start against Reynolds. With two outs in the top of the first, Thompson walked, and Irvin – who had led the Newark Eagles to the 1946 Negro League World Series title by hitting .462/.533/.885 in a seven-game series against the Kansas City Monarchs – singled to move Thompson to third. Whitey Lockman hit a ground-rule double, scoring Thompson, sending Irvin to third – and setting the stage for one of the most memorable plays in the Series.9

At third, the 32-year-old Irvin, who had joined the Giants in 1949, noticed Reynolds’ slow delivery to the plate and believed he could steal home. Mentioning this apparent weakness to Durocher, who coached third base, Irvin received the green light: “Get a big lead, get a good jump on the next pitch and go ahead.”10

Upon Reynolds’ pitch to Thomson, Irvin broke from home. Reynolds was caught off-guard and threw high to Berra. The off-target throw disrupted the timing of Berra’s tag, and Irvin slid in for the second run of the inning. It was the first steal of home in a World Series game in 30 years.11

The Yankees got on the board in the bottom of the second when Gil McDougald doubled to left field with one out, and Jerry Coleman brought him home with a single to right field. Coleman continued to second on an error when Thompson bobbled the ball. After Joe Collins grounded into a force out, Reynolds singled and rookie Mickey Mantle, playing in the first World Series game of his career, walked to load the bases, but Phil Rizzuto grounded out to end the inning with the Giants ahead, 2-1.12

Spearheaded by Irvin, the Giants threatened to increase their lead in the third and fifth innings, but Reynolds turned them away both times. They loaded the bases after two outs in the third on Irvin’s second single of the game, a walk to Lockman, and a single by Thomson, but Reynolds retired Mays – like Mantle, making his World Series debut – on a lineout to Coleman at second. Irvin tripled with one out in the top of the fifth for his third hit of the ballgame, but both Lockman and Thomson grounded out to leave him stranded.13

Durocher’s team broke the game open in the sixth. Wes Westrum singled to left with one out and advanced to second on Koslo’s sacrifice bunt. Eddie Stanky walked,bringing up Alvin Dark. Dark smashed a long fly ball to deep left field and over the fence for a clutch three-run home run that put the Giants up 5-1.14

The Yankees got baserunners on in the eighth and the ninth, but none crossed home plate. After Mantle flied out to end the game, Giants teammates mobbed Koslo for his brilliant performance. It was the first time the Yankees lost the first game of the World Series since 1936.15 Future Yankee Hall of Famers Mantle, Rizzuto, DiMaggio, and Berra went a combined 3-for-15, with Mantle walking twice.

The southpaw Koslo attacked the Yankees lineup with sinking fastballs and refrained from throwing many curveballs. With the wind blowing from the outfield, Koslo’s curveball tended to hang over the plate.16 Casey Stengel praised Koslo’s impressive control afterward, identifying it as the difference in the game. Koslo, Stengel said, was “ahead of the hitters all afternoon.”17

After the game, Durocher admitted to the New York Times that the Giants received a scouting report from Brooklyn Dodgers scout Andy High. The report was intended for the Dodgers since Brooklyn seemed destined to play the Yankees in the World Series, but the Giants caught up to them. Before the game, Durocher briefed Westrum on the scouting report so Westrum and Koslo knew how to pitch to the Yankees.18

Although Mays had a tough day, going 0-for-5 with a strikeout, Irvin and Thompson came up with tremendous plays to catapult the Giants to victory. Irvin was the star of the show, going 4-for-5 with a triple. In addition to his steal of home, Irvin played a great left field, robbing Hank Bauer of a first-inning home run. Thompson walked twice and scored one run while also making a diving catch in the first inning to rob DiMaggio.19

In his autobiography, Nice Guys Finish First, Monte Irvin claimed that stealing home in Game One was the biggest thrill he had in his career. When the home-plate umpire called Irvin safe, Yogi Berra protested the call, saying, “No, No!” Irvin replied, “Yes, Yog.” When Berra asked how he knew, Irvin said, “You’ll see it tomorrow in the Daily News and the Daily Mirror. It’s just that simple.”20

In addition to the sources cited in the Notes, the author relied on Retrosheet.org, Baseball-Reference.com, and the SABR BioProject.

4 Reynolds’ first no-hitter of the season was against Cleveland on July 12.