It had been a long time for both teams. A very long time since either the Boston Braves or the Cleveland Indians had won a pennant and earned a trip to the World Series. The Miracle Braves were a true rags-to-riches story, winning the 1914 World Series over the Philadelphia Athletics, after they had lost more than 100 games and finished in dead last in 1912. The Indians were not much better, having raised their first and only pennant in 1920. (They then bested the Brooklyn Robins to win the world championship.)

Those fans who perused The Sporting News on a regular basis were probably not surprised to read that in the April 21, 1948, issue the Boston Red Sox and the St. Louis Cardinals were picked to finish in the money. Still, the Braves were given strong consideration in the senior circuit: “Could be looking down at seven other clubs when the curtain drops on this current season,” wrote John Drohan of the Boston Traveler. Ed McCauley of the Cleveland News was not as optimistic about the Indians, writing, “Enough improvement over last year to suggest third place finish.” 1

The Braves trailed the Brooklyn Dodgers on September 1 by a half-game. But Drohan’s words proved prophetic as the Tribesmen posted a 21-7 record the rest of the season while the Dodgers broke even at 16-16. Boston finished a comfortable 6½ games over the second-place Cardinals.

The Indians had more drama to their pennant chase, as they tied the Red Sox at the end of the regular season. A one-game playoff was held on October 4, the day after the season ended, at Boston’s Fenway Park. Behind two Lou Boudreau home runs and the 20th win for rookie Gene Bearden, the Indians punched their postseason ticket with an 8-3 triumph. One person who was in attendance at Fenway for the playoff game was Braves pitcher Johnny Sain. “I went over to Fenway Park to familiarize myself with the players on both teams,” he said. “I stayed about six innings. It would have been nice to have an all-Boston Series, but I felt I’d have better success against Cleveland because I’d pitched against them more in spring training. I also liked Municipal Stadium more than Fenway Park. So I wasn’t upset that Cleveland won.”2

Game One was played at Braves Field as the fans were treated to an autumn-like day of 62 degrees. Although it was rather windy and gray, there was no threat of precipitation. Bob Feller (19-15, 3.56) started for Cleveland while Sain toed the rubber for the hometown heroes. The Braves’ right-hander led the NL in wins in 1948 (24-15, 2.60). The ballgame shaped up to be quite a pitchers’ battle, and these two giants of the mound did nothing to sway that belief.

Both pitchers kept the crowd of 40,135 rather listless through the early innings of the game. As Paul Giguere of the Boston Herald wrote, “Yesterday’s opening World Series game in Boston went into the books as one of the most subdued on record – not because there was any lack of spirit, but because of the close pitcher’s duel. Most of the time the mammoth crowd was hushed. Peanuts cracking and the sound of the busy ambulance were all that could be heard.”3

Marv Rickert’s single to lead off the bottom of the fifth inning was the Braves’ first safety of the game against Feller. Although the home crowd finally had something to cheer, Feller retired the side without incident.

And on it went, zeroes populated the scoreboard. Sain and Feller refused to give an inch to the opposition’s batters. But this game would be decided by which hurler exhibited the best control. And on this fall afternoon, that was Johnny Sain.

Feller surrendered a walk to Braves catcher Bill Salkeld to lead off the bottom of the eighth inning. Salkeld, a reserve catcher, was a left-handed batter, and thus drew the starting assignment against the righty Feller. Phil Masi, the regular backstop for the Braves, was sent into the game to pinch-run for Salkeld. Mike McCormick laid down a sacrifice bunt to advance Masi to second base. Eddie Stanky followed and Cleveland skipper Lou Boudreau elected to give The Brat a free pass. Although he was criticized later for the strategy, Boudreau explained that he was setting up a potential double play, as Sain stepped into the batter’s box. However, Sain lined out to right field for the second out.

Feller and shortstop Boudreau then worked on some chicanery, as they attempted a pickoff play to try to nail Masi at second base. Seemingly, the ball arrived as Masi dove back to the bag on his belly. Second-base umpire Bill Stewart ruled Masi safe, although Feller and Boudreau argued vehemently that the runner had been tagged before he touched the base. “Boudreau tagged him up on the elbow,” said Stewart.“ It was just another decision.”4

Leadoff hitter Tommy Holmes, who hit from the left side, represented the Braves’ best opportunity to score a run. He didn’t disappoint when he socked an outside offering from Feller down the third-base line and into left field to score Masi. The fans cheered with much delight as the Braves catcher crossed home plate, clutching his cap in his right hand. Holmes’ single was only the second hit Feller gave up in the game.

The Braves needed three outs to secure the win and take a 1-0 lead in the Series. And with Warren Spahn scheduled to pitch in Game Two, the Braves had a 2-0 lead dancing in their heads, but first things first. Sain retired the first two Cleveland hitters in the top of the ninth. Indians third baseman Ken Keltner then sent a grounder to third, but third sacker Bob Elliott airmailed the baseball over Earl Torgeson’s head at first base. Keltner was awarded second base and some groans filled the stands. But Sain made quick work of Wally Judnich, striking him out with a curveball that reportedly broke about two feet. It was Sain’s sixth K of the game, and he hadn’t walked a man. He scattered four hits, and was behind in the count to only two Indians hitters.

Said Holmes of his game-winning hit: “(Feller) caught me on that (outside) pitch the last time up and I figured he was going to throw it again.” “They gave me the hole at short, but I didn’t want it. I was shooting for that line and I caught it. Hey, it’s a wonderful feeling. I just knew Johnny would win this one.”5

“We may not have many players who have been through a World Series,” said Boston manager Billy Southworth,”but you never saw a cooler bunch in your life. They have courage. They played and waited for the break and when it came, they jumped.”6

The Indians doffed their caps in admiration of the job Sain did. “I never saw so many rattlesnakes in my life,” said Joe Gordon. “He’s got quite an assortment. A curve overhand, then three-quarters overhand, then side-arm. I don’t know how the fellow keeps throwing them – and over the plate all the time.”7

The Braves received an unexpected lift before Game One. Jim Russell, their regular center fielder, was hospitalized with an ailing heart in Pittsburgh. Leo Egan of Boston radio station WHDH interviewed Russell a week before the Series began, with the thought that he might like to address the team before the game. The recording was played back to the ballclub before the start of the game. “There wasn’t a sound during the playing,” said Southworth, “and when it finished, all the players stood up, took another hitch in their belts and were really ready to charge out there. I held them for another minute, as I always do, and then out they went. It was great tonic to know that Jim was with them.” 8 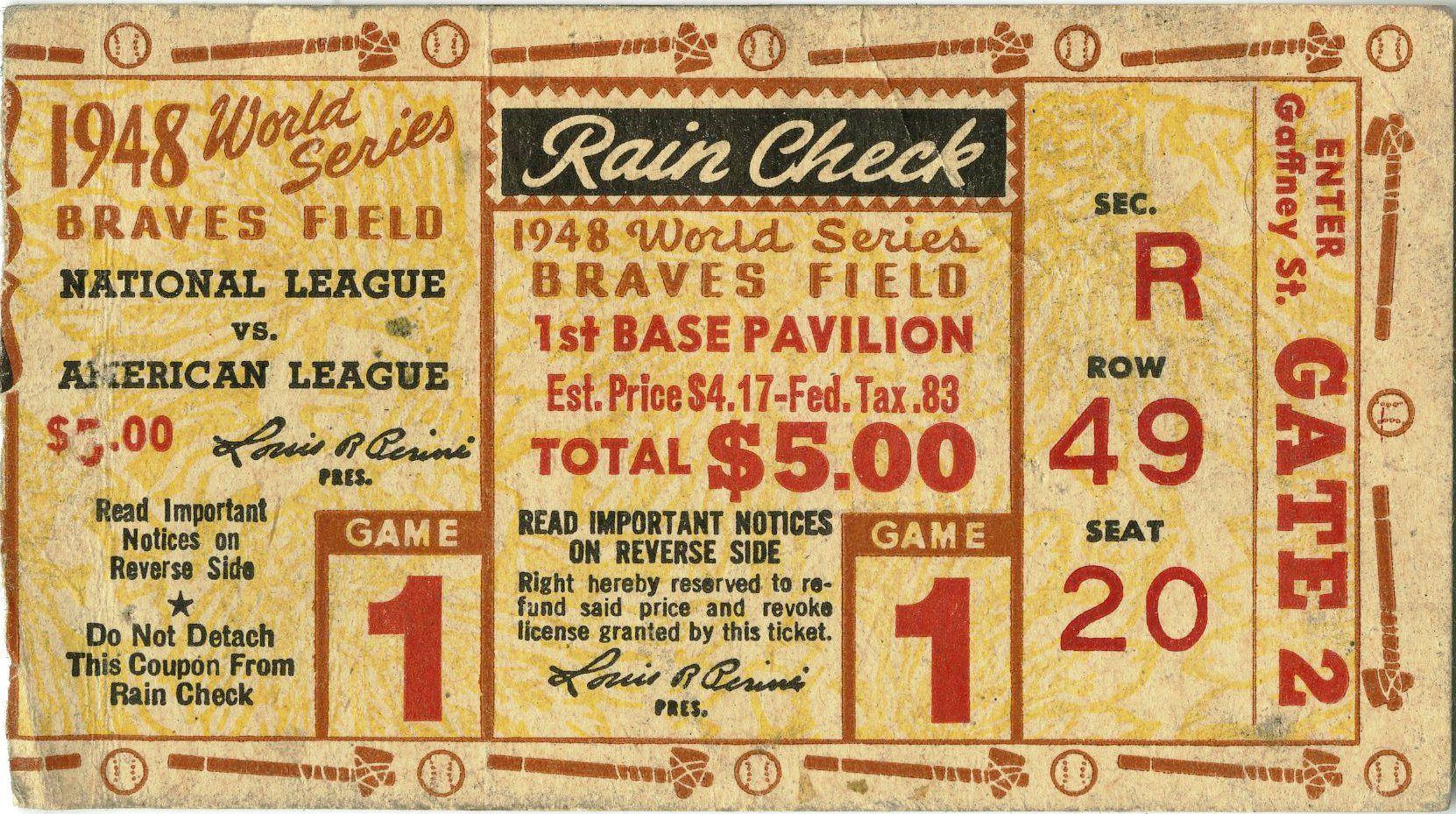