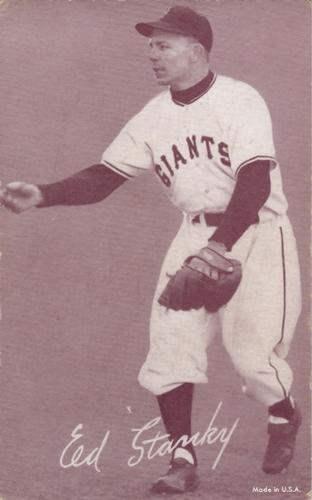 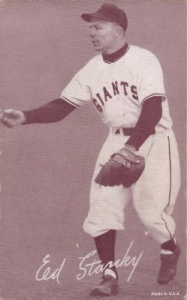 After his brain cramp in Game Two of the 1951 World Series, Eddie Stanky used guile to spark the New York Giants to a 6-2 triumph over the New York Yankees at the Polo Grounds in Game Three and a 2-1 Series lead. Rarely does a stolen base matter more than a three-run homer, but Stanky’s can-can attack on Phil Rizzuto at second ignited the fifth-inning rally, later capped by Whitey Lockman’s three-run blast, that tilted the game in favor of the National League champions.

The Giants had seized the upper hand in Game One at Yankee Stadium, rolling to a win after Monte Irvin’s first-inning steal of home, but the two-time defending champion Yankees evened the Series behind Eddie Lopat’s pitching and hitting in Game Two, adding an eighth inning insurance run after Stanky failed to cover second on a potential force play.

For the first time in the Series, neither team scored in the first inning in Game Three, although both threatened to do so. In a bit of foreshadowing, Stanky used his body to get on base (via a hit-by-pitch against Yankees starter Vic Raschi), and Rizzuto cost the Yankees at second base (when he was caught stealing after singling off Jim Hearn of the Giants).

The hosts took a 1-0 lead in the second thanks to Bobby Thomson’s double in his first home at-bat since his pennant-winning “Shot Heard Round The World” off Ralph Branca three days earlier, and Willie Mays’ first World Series hit after nine hitless at-bats, an RBI single.

The Yankees had repeatedly capitalized on miscues by the Giants in Game Two but failed to do so in Game Three. In the third, after Hank Bauer reached when Lockman failed to corral Alvin Dark’s throw on a grounder to short, Raschi bunted to Hearn, who forced Bauer at second. Dark, seeking a double play, threw wildly to first, but Lockman, making amends for his error on the previous play, retrieved the ball and threw to Dark, who put the tag on Raschi trying to advance on the overthrow.

Media accounts offered three theories regarding the unconventional twin killing: (1) Raschi failed to hustle, seemingly taking the extra base for granted; (2) Raschi ran with the proverbial piano on his back; and (3) Dark faked out Raschi at second base by standing there nonchalantly until the throw arrived.

The game account in the New York Times supports the first theory: “Raschi rumbled down to second as leisurely as though the little white pill were rolling down Eighth Avenue. Big Vic, therefore, was the most surprised person in the arena when Lockman threw to Dark in time to nip Raschi standing up.”1

Two other writers for the Times had fun with the 32-year-old hurler’s slowness: “Big Vic chugged past first base like a moving van toiling uphill.”2  “Time flies, but Vic Raschi crawls. … Raschi … had what seemed like ninety seconds to negotiate ninety feet, [but] was retired.”3

Giants manager Leo Durocher, true to form, credited his clever shortstop: “‘He really decoyed him,’” Leo laughed. “‘Raschi thought there wasn’t going to be any play at second base. Then he slowed up and Dark really put it on him. I thought I’d fall right off the dugout steps.’”4

Some combination of all three theories plus an injury unreported at the time5 likely explains the odd 1-6-3-6 double play. In more than 600 career plate appearances, Raschi had just one triple and no stolen-base attempts, suggesting both a lack of speed and a desire to take the extra base. Dark’s long managerial career attests to his strategic smarts.

But an even more interesting play on the bases happened two innings later, featuring a more evenly matched pair in Stanky and Rizzuto. The game remained 1-0 with one out in the fifth when Stanky again reached, as he so often did, without the benefit of a hit6 (he walked this time).

Stanky then set off for second. American League Most Valuable Player Yogi Berra threw a perfect peg to Rizzuto, who had the ball in his glove, waiting for Stanky.

The 36-year-old baserunner had other designs. “[Stanky] slid into Rizzuto and Phil never realized that Master Eddie was a skilled soccer player in his youth,” Arthur Daley reported in the New York Times. “Stanky never kicked a better goal in his life.”7

“Stanky looked to be a dead duck,” Daley’s colleague John Drebinger wrote. “But the Brat still had one more trick up his sleeve, or rather it should be said, in his shoe.”8 The Brat booted the ball out of the Scooter’s glove.

As Rizzuto ran into the outfield to chase the ball, Stanky raced for third. Somehow the Brat had transformed a caught-stealing into two bases.

Rizzuto and Casey Stengel predictably protested. They claimed both interference by Stanky via the kick and the failure of Stanky to touch second base since Rizzuto claimed he had it blocked.

The two bases instead of the one out mattered in a one-run game, but the post-imbroglio mojo shift mattered more. The Yankees lost focus; correspondingly, the Giants, a one-man Irvin-led offense through Game Two, revived.

Dark singled to plate the heroic – or villainous – Stanky. Thompson singled to chase Dark to third. Irvin grounded to Bobby Brown at third, who threw home to Berra in plenty of time to get Dark. Initially, “[u]mpire Joe Paparella … called Alvin out, but had to reverse his decision when Berra dropped the ball”9 for an error to allow another run.

The Yankees now trailed 3-0, a troubling but not impossible deficit to overcome. But “Lockman lined a three run homer into the lower deck of the right field stands,”10 a hit that might never have taken place without Stanky’s startling kick. “He upset the applecart and the Bombers haven’t picked up all the scattered apples yet,” Timesman Daley observed.11

Stanky had a history with this play: “[I]t was the third time this season that Stanky has pulled this trick,” a Boston scribe noted. “He kicked the ball away from Red Stallcup of the Reds and Roy Smalley of the Cubs when he was palpably out. He tried it against the Braves, but of course they were too smart – or they knew their former teammate better.”12

Wrote another reporter: “Stanky, a mocking grin on his face and a look of pretended innocence in his eyes, explained: ‘I guess Phil Rizzuto didn’t have too good a grip on the ball.’”13

The score remained 6-0 until the top of the eighth. Hearn hit the slight Rizzuto, who took a beating in the game, and gave up a single to Gil McDougald.

The Yankee rally cooled when Joe DiMaggio popped up for the first out. McDougald had reached base four straight times, but the venerable DiMaggio, playing in his ninth World Series with his 37th birthday a month away, had followed with four fruitless at-bats, which drew unfavorable press attention.

“The Clipper had another disastrous day at the plate, going hitless for the third consecutive game, and so contributed nothing to the slim five-hit total which the Bombers managed to compile off Hearn and [Sheldon] Jones,” wrote the Times’s John Drebinger.14

In a bylined article, Hearn revealed, “I used a lot of sinkers against the Yankees. Except on Joe DiMaggio. … I threw him sidearm curve balls.”15

After Berra grounded out for the second out, Hearn issued consecutive walks to Brown and Joe Collins, the latter of which scored Rizzuto. Jones replaced Hearn and got out of the bases-loaded jam by inducing a comebacker from Bauer.

Gene Woodling homered in the ninth off a first-pitch fastball; Sheldon Jones commented after the game, “[W]ho’d think he’d be swinging at a time with the Yanks five runs behind?”16 Still, the final score was 6-2 in favor of the home team, which allowed the Giants to regain the Series lead with two more home games to come.

Unlike the sensitive Rizzuto, who fumed about Stanky’s pivotal kick for more than a generation, Stengel kept his sense of humor and perspective, admitting, “All the kicking wasn’t done by the other fellows. We kicked away a couple of chances to win. … They kicked the ball over for a while, too.”17

5 “[A] collision at home plate with Indians catcher Jim Hegan in August 1950 resulted in torn cartilage in Raschi’s right knee. … Raschi and the Yankees kept the injury to themselves to prevent other teams from taking advantage by bunting on him. Not until November 1951 did he undergo surgery to remove the cartilage.” Lawrence Baldassaro, “Vic Raschi,” in Lyle Spatz, ed., Bridging Two Dynasties: The 1947 New York Yankees (Lincoln: University of Nebraska Press and Society for American Baseball Research, 2013), 141.

14 Drebinger, “Giants Beat Yankees, 6-2, for 2-1 World Series Lead.” “Joe DiMaggio was bemoaning the fate that has kept him hitless in what may be his farewell to baseball. ‘I’ve lost the swing through the strike zone,’ he said.” James P. Dawson, “Bombers Loud in Criticism of Decisive ‘Field Goal’ Kick in the Fifth Inning,” New York Times, October 7, 1951: S3.