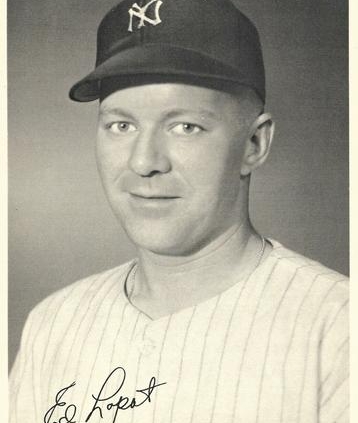 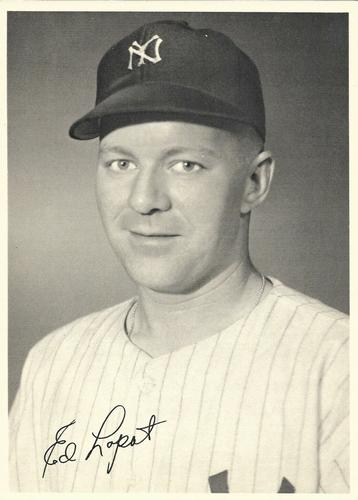 In Game Two of the 1951 World Series, Eddie Lopat of the New York Yankees bested Larry Jansen of the New York Giants in a 3-1 complete-game triumph at Yankee Stadium, knotting the series after the Giants’ Game One win. But Mickey Mantle’s knee injury, which sidelined the talented rookie for the rest of the World Series and hampered the rest of his Hall of Fame career, put a damper on the game.

As in Game One, Eddie Stanky and Alvin Dark were retired to begin the match for the Giants, but unlike Yankees starter Allie Reynolds in the opener – who had allowed three first-inning baserunners and two Giants runs after two outs – Lopat, starting a World Series game for the third season in a row, put away Bobby Thomson to retire the side in order.

The Yankees struck first in the bottom of the first against Jansen, who two days earlier had retired three Brooklyn Dodgers in relief, then became the pennant-clinching winning pitcher when Thomson’s “Shot Heard ’Round The World” capped the Giants’ ninth-inning rally.

This time, the Yankees used some uncharacteristic small ball to start the inning: consecutive bunt singles by Mantle, batting left-handed, and Phil Rizzuto. Mantle later “admitted he had planned to bunt the first time up against Jansen even before he left the clubhouse for the game. … It was a perfect drag, too fast for the tumbling Jansen to reach, too slow for [second baseman] Stanky to play in time.”1

Mantle took an extra base on Rizzuto’s bunt due to some sloppy defense by the Giants: “There was no chance to nail Rizzuto, but [Whitey] Lockman threw anyway,” a sportswriter covering the game observed, adding, “His throw eluded Stanky, and Mantle took third.”2

Unlike Giants manager Leo Durocher, who took partial credit for Monte Irvin’s steal of home in Game One, Yankee boss Casey Stengel disavowed any role in the unusual first-inning attack.3 “Both bunts were breathtaking affairs and perhaps, on his own say so, no one was more surprised than Stengel himself, Casey later insisting that he had not conceived this part of the attack,” the New York Times reported.4

Mantle scored when Gil McDougald “lifted a rather feeble pop fly in short right. Henry Thompson … came tearing in for it and for a few fleeting moments, it looked as if he would catch it.”5 But when the Texas Leaguer landed for a single, Mantle crossed the plate, giving the Yankees the lead for the first time in the Series.

Continuing his hot hitting after recording four hits, including a triple, in Game One, Irvin singled to start the second and “stole another base, pilfering second base with a fallaway slide worthy of Ty Cobb.”6 But Lopat needed just seven pitches to garner three groundouts and strand Irvin.

The Yankees expanded the lead with RBIs from the eighth- and ninth-place hitters. With two outs and no one on in the bottom of the second, Jansen “made a bad pitch, a curve ball that hung[,]”7 to first baseman Joe Collins, who hit “a towering high fly with barely enough strength to drift into the right-field stand.”8 Having sat out Game One against Dave Koslo due to a lack of power against lefties,9 Collins hit a classic Yankee Stadium homer put the home team up, 2-0.

No one scored through the middle frames, but three future Hall of Fame center fielders intersected historically – and tragically – in the top of the fifth. Giants rookie Willie Mays flied out to Joe DiMaggio in center, and Mantle, preparing to back up on the play from right, severely injured his knee.

Patrick Burns photographed the play for the New York Times. Mantle sprawls on the grass with one leg down and the other scissor-kicked up in the air while DiMaggio, probably distracted by his fallen mate, goes up on tiptoes with his glove under the path of the approaching ball as if readying to make a basket catch. The framing of the picture shows seated fans, many of whom sport suits and ties, following the ball and the outfielders, doubtless oblivious to how a seemingly routine fly ball would impact Mantle for the rest of his baseball life.

As his biographer Jane Leavy concluded, “That October afternoon was the last time Mantle set foot on a baseball field without pain. He would play the next seventeen years struggling to be as good as he could be, knowing he would never be as good as he might have become.”10

Stengel’s propensity to platoon meant the Yankees had a more than adequate substitute for Mantle in Hank Bauer, who would go 0-for-2 in Game Two, then play a major role in the rest of the Series.

Meanwhile, Lopat, still with a two-run lead, “was at his coy best, befuddling the right-handed batters with a screwball that faded away and mixing just enough fast balls with his curves and change-ups to baffle all,” observed the Philadelphia Inquirer.11 “He tosses an odd assortment of [pitches] at various degrees of comparative slowness,” the New York Times noted. “Although the ball looks big as a balloon, lucky is the fellow who contrives to nick a piece of it.”12

The Giants threatened in the top of the seventh as the incomparable Irvin singled, Lockman singled, and, with one out, Wes Westrum walked. With the bases loaded, Durocher made a trio of moves, using two pinch-hitters and one pinch-runner, but got only one run, as Irvin came home on Bill Rigney’s fly ball to Bauer, the latter’s only putout after he replaced Mantle.

Lopat helped the Yankees get the run back in the bottom of the eighth, with sloppy defense by the visitors once again playing a key role. After Bobby Brown singled, Stengel pinch-ran Billy Martin, a 23-year-old reserve infielder in his second season in the majors. Collins grounded to third baseman Thomson, “[b]ut Dark and Stanky somehow left the keystone sack uncovered and, with nobody at second to retrieve his throw, Thomson finally fired the ball to first for the putout on the batter.”13

Shortstop Dark deserved no blame, as the second baseman should cover the bag in this situation. The usually heady Stanky, however, “was somewhere between first and second, thinking beautiful thoughts.”14

The Yankees capitalized when Lopat singled to center to score Martin, a substitution praised by Durocher. He asserted that Stengel “got himself an extra run by putting Martin into the game. Brown would have never beaten Willie Mays throw to the plate,”15 but Martin did, giving the Yankees a 3-1 lead. “Despite Lopat’s five-hit hurling, he was prouder of his single in the eighth inning, The Sporting News reported. “‘It drove in the insurance run and kept the Giants from bunting in the ninth,’ he beamed.”16 In 19 World Series at-bats over the Yankees’ five straight titles from 1949 through 1953, Lopat had three RBIs, an excellent total for a pitcher.

The Giants did get the tying run to the plate in the ninth after Irvin once again singled for his seventh hit in two games. “‘If any of you guys know how to pitch to Irvin,’ Casey Stengel told the writers who visited his office after the game, ‘I wish you’d tell me. … I don’t even know how we got him out twice.’”17

Lopat, however, retired the final three Giants after Irvin on groundballs, getting the last putout himself on an assist from Collins for the first World Series complete game of his career … but not the last one of the Series. “It was easily the best of the three World’s Series games Lopat has hurled for the Yankees since 1949,” The Sporting News wrote, adding, “He fed Leo’s warriors his assortment of soft stuff, dinky curves and a 1951 version of Dizzy Dean’s ‘nothing ball’ of the 1938 Cub-Yankee series, and the Giants could do nothing about it.”18 Tied at one win apiece, the Yankees and Giants would move across town to the Polo Grounds for the next three games.

3 Stengel said, “Mantle and Rizzuto were bunting on their own with those two stabs that brought our first run. They’re drilled to do whenever they think they can get away with it. They got away with it both times.” James P. Dawson, “Yanks’ Joy Over Triumph Is Tempered by Loss of Mantle for Remaining Games,” New York Times, October 6, 1951: 24.