“It’s surreal, it really is. I just wanted to pitch here (Philadelphia), pitch in the postseason. To go out and have a game like that, it’s a dream come true.” 1 — Roy Halladay, October 6, 2010.

“When it gets that loud, it’s hard to ignore. I thought especially the last three innings, it got louder every inning. It’ probably — obviously- one of the most electric atmospheres I’ve ever been in. It was pretty neat.”2 — Roy Halladay, October 6, 2010. 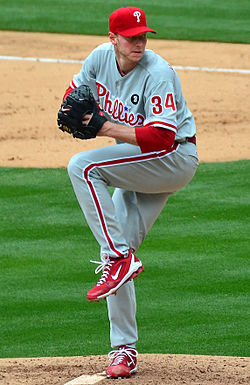 As the dinner hour approached in Philadelphia, 46,411 fans, virtually all rooting for the Phillies, congregated at the ballpark in Philadelphia and were greeted by the type of cold and rainy weather that is not unusual in the fall months. Millions of people nationwide gathered, in more comfortable surroundings, around television sets for the first game of the National League Division Series. The Phillies had won the NL East and were facing the Cincinnati Reds, the NL Central winner. The Reds were appearing in the postseason for the first time since 1995.

Philadelphia’s Roy Halladay was making his first postseason appearance after 12 frustrating years in Toronto. He wanted to be traded to Philadelphia as early as midway in the 2009 season, and after the season, he got his wish. In his first season with the Phillies, he had gone 21-10 and was acknowledged as the best pitcher in the game. Would he be able to confirm that status in the postseason?

Cincinnati countered with Edinson Volquez. He had started 12 games since re-joining the club in mid-July. He had begun the season at Class-A and made three minor-league stops, appearing in eight games, before being recalled by the Reds and joining their rotation. He had a 4-3 record with an ERA of 4.31, but down the stretch, he gave the Reds a strong boost when, on September 21, he allowed one run and scattered three hits in eight innings, as the Reds won, 4-3, to extend their NL Central lead to eight games.

After Halladay retired the side in order, using only 10 pitches (per Baseball-Reference.com) in the top of the first inning, the Phillies broke on top with a run in their first at-bat.3 Shane Victorino doubled with one out, stole third base, and came around to score on a fly ball by Chase Utley, barely beating the throw with a head-first slide. Volquez was having trouble with the elements. “I had problems in the first inning, the feeling with the ball. It was kind of cold and raining, a little wet with the grip. I couldn’t control some of them (pitches) with the rain.”4

In the next inning, Halladay continued his mastery with another three quick outs. The Phillies, with two out in their half of the inning, broke things open. Carlos Ruiz walked as Volquez seemed to be pitching around him.5 Wilson Valdez, playing third base for the Phillies in place of Placido Polanco, then hit a ball up the middle that was fielded by shortstop Orlando Cabrera. Cabrera tried to force Ruiz at second but the throw was wide.6 The official scorer credited Valdez with a single. Halladay aided his own cause, driving in Ruiz with a line-drive single to left field that fell in front of Jonny Gomes, as Gomes tried to make a sliding catch on the play. Halladay, who had rarely had the opportunity to bat in his days in the American League (3-for-38 in interleague play) had taken his hitting seriously since joining the Phillies, going 13-for-92 with five RBIs during the 2010 season. From July 23 through August 14, he hit in five consecutive games, each one a Phillies victory. As he stood on first after his RBI single, Halladay saw the Phillies’ fans, as a group, standing and waving their “Fightin’ Phils” rally towels.7

A walk to Jimmy Rollins loaded the bases and Victorino, with his second hit of the game, a single, delivered two runs and forced a pitching change. The Reds brought in Travis Wood, in his first relief appearance of the year, to get the final out of the inning but the damage was done and the Phillies had more than ample run support. Halladay kept rolling along and was backed up by good fortune and good defensive work. Reds pitcher Wood, with two out in the third inning, hit a sinking liner to right field that was hauled in by Jayson Werth, who had been perfectly positioned on the play. An inning later, it was Rollins’ turn to shine, going into the hole between shortstop and third to gather in a ground ball off the bat of Joey Votto.

The Reds finally got a base runner in the fifth inning when Jay Bruce walked on a 3-2 cutter with two out. He would be the only Cincinnati base runner of the game. And the Phillies continued to back up Halladay with their gloves. In the top of the sixth inning, after Wood had pitched 3 1/3 scoreless innings in relief, he was removed as Reds manager Dusty Baker inserted Juan Francisco as a pinch-hitter. Francisco had been added to the roster at the last second as a replacement for the injured Jim Edmonds. He hit a hard smash up the middle, but Rollins ranged over to make the play and throw on to first for the second out of the inning.

Pitchers were in complete command for each side in the seventh and eighth innings as there was not a single hit. The score, as the game went to the ninth inning remained 4-0. Halladay took the mound and the noise was deafening. As John Gonzalez wrote in the Philadelphia Inquirer, it was a “choreographed mass that couldn’t possibly believe its good fortune and needed to express its happiness in unison.”8

“I was panicking as I reached for the ball. My hand was shaking, it’s still shaking. When the ball came off the bat, I had to reach back a little bit to pick it up and throw it, and that’s why I went to my knee.” 9 — Philadelphia catcher Carlos Ruiz.

Ramon Hernandez and Miguel Cairo each hit harmless pop-ups and there were two quick ninth-inning outs. Brandon Phillips came up to bat for the fifth time as the Reds’ final chance to extend the game. With the count at 0-2, he was protecting the plate when Halladay’s pitch caromed off the bat of and fell about 10 feet in front of home plate in fair territory. Ruiz threw off his mask and chased after the ball, almost tripping over it. His motion took him past the ball. He reached back to grab the ball, went to one knee, and threw to Ryan Howard at first base to secure Halladay’s second no-hitter of 2010. The game was over in 2:34. Doc had thrown a perfect game against the Marlins on May 29. But this effort was on center stage, and much more economical. In May, Halladay had thrown 115 pitches (72 for strikes). This time around, only 25 of his 104 pitchers were balls. He stuck out eight Reds batters.

The following day was a day off for both teams, but Halladay, as always, was among the first at the ballpark to begin his workout regimen. When the series resumed, the Phillies won the next two games and advanced to the League Championship serious where they lost to the eventual World Series-winning San Francisco Giants, missing out of a third consecutive trip to the World Series.

Halladay would never play in a World Series.

Opposing manager Baker said, “The thing about it is, you know, I don’t think he threw anything down the heart of the plate. Everything was on the corners and moving. I don’t know what his percentage was, but it looked like he threw 90% for first-pitch strikes (it was 25-of-28 for 89%). Any time you do that with the stuff he has, then he can go to work on you after that.”10

And Philadelphia pitching coast Rich Dupree observed, properly so: “The marathon is over. The 11 years of grinding and working are over. Now it’s time to really enjoy it and cherish it, and I think he understands that. If you work so long to get hereto get into the postseason, you might as well be yourself and enjoy it and run with it. Tonight, he did.”11

In addition to those sources cited in the notes, the author used Baseball-Reference.com.

2 John Erardi, “Phillies Good to the Last Out: For All of Halladay’s Dominance, It Took Smooth Play on a Tricky Hope to Seal Gem,” Cincinnati Enquirer, October7, 2010: D4