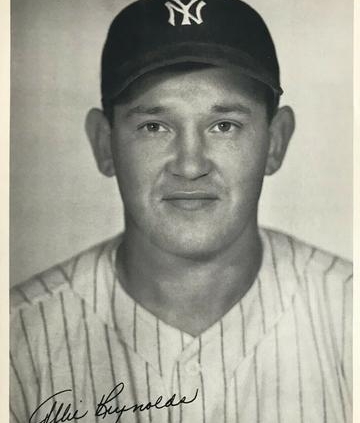 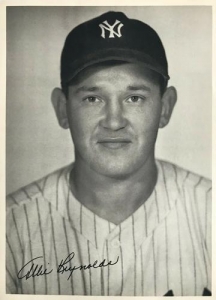 After outscoring the New York Yankees 12-6 to take two of the first three games of the 1951 World Series, the New York Giants’ offense dried up after a rainy Sunday led to Game Four’s postponement. As historian Frank Graham observed, “it rained and it was as if the rain cooled the Giants off, for they were not the same again.”1

Game One starter Allie Reynolds, Game Two starter Eddie Lopat, and Game Three starter Vic Raschi had served as a Big Three for Yankees manager Casey Stengel in 1951, accounting for 59 of their 98 wins. But the World Series’ seven-games-in-seven-days pace required a fourth starter, and Stengel had no clear options for that role.2

During the regular season, Stengel had split the 63 starts that the Big Three did not make among 11 other pitchers. Tom Morgan, a 21-year-old rookie, led the way with 16 starts, and Spec Shea, who had won two games in the 1947 World Series as a rookie but struggled with injuries afterward, followed with 11. The former appeared in the Giants’ Game One blowout, the latter not at all.

Stengel had tapped late-season acquisition Johnny Sain – famously a spearhead, along with Warren Spahn, of the NL pennant-winning 1948 Boston Braves but hampered by a shoulder injury for the past three seasons – to start Game Four,3 but the rainout on October 7 allowed him to return to his Big Three once more.4 Reynolds got the call for the sixth World Series start of his career.

Going into Game Four of what the curmudgeonly Grantland Rice called “no delirious display of brilliant or dramatic baseball,”5 the Giants seemed to have momentum given the Series results so far, superior starting pitching depth, the fact that manager Leo Durocher had not yet used his ace, Sal Maglie, and the battering that Reynolds had taken in Game One.

The first inning of Game Four appeared to accelerate the Giants’ edge in momentum. After walking Hank Bauer to open the game, Maglie retired the next three Yankees in order, culminating with a strikeout of Joe DiMaggio, now hitless in 12 at-bats for the Series. DiMaggio had at least made Maglie work, as “it took the Niagara Falls barber ten pitches to subdue DiMaggio.”6

In the bottom of the frame, Al Dark, who had a big homer off Reynolds in Game One, doubled with one out. One out later Monte Irvin, who had gone 4-for-4 off Reynolds in the opener, singled to score Dark. But Yogi Berra threw out Irvin – whose first-inning steal of home was key to the Giants seizing the upper hand in Game One – trying to steal, with Phil Rizzuto make a nice catch-and-tag of the high throw, and whatever momentum the Giants had seemed to disappear with that play.

Gene Woodling’s double and Joe Collins’s single allowed the Yankees to tie the score in the top of the second. Willie Mays hit into a double play to end the Giants’ half of the frame.

In the third DiMaggio got his first hit of the Series, a harmless single – but a harbinger of bigger hits to come.

The Yankees took a 2-1 lead in the fourth on an RBI hit by Reynolds, which matched Lopat’s RBI single in Game Two. By losing track of the positioning of the cutoff man and getting thrown out in an 8-6-3 rundown, however, Reynolds also matched Raschi’s misadventures on the bases in Game Three.

Allie’s absentmindedness did not impact his pitching although he did yield another double to Dark in the fourth.

In the fifth Berra singled with one out, setting the stage for DiMaggio. Playing in his 10th career World Series, DiMaggio walloped his eighth and final postseason home run off a Maglie curve. “The ball went into the upper deck in left and it was still rising when it landed for a homer,” the Boston Globe noted.7 The Yankees now led 4-1.

Reynolds made the advantage stand up, turning Mays’ comebacker into a double play after Bobby Thomson led off the fifth with a walk. (The DP Mays hit into in the second also followed a walk to Thomson.) Dark tried to spark the Giants in the sixth with his third straight double – and fourth straight extra-base hit over two games against Reynolds – but Reynolds stranded him.

Rizzuto and Eddie Stanky, who had collided in a memorable second-base collision in Game Three when Stanky transformed a would-be caught stealing into a rally-starter by kicking the ball out of Rizzuto’s glove, crossed paths again in the top of the seventh. This time, however, Rizzuto came out on top, although he once again took a physical beating.

After Rizzuto singled and Woodling walked, “Rizzuto, taking too big a lead off second,” apparently was caught off base by [Wes] Westrum’s “fine throw to the bag.”8 Rizzuto, “in a desperate situation, tried for third. Eddie Stanky’s throw hit him in the head. The ball bounced outside third and Phil kept going until he crossed the plate.”9

Gil McDougald followed with an RBI single to score Woodling, saddling Sheldon Jones, who had entered the game after Maglie left for a pinch-hitter in the fifth, with two unearned runs and giving the Yankees a commanding 6-1 lead.

Reynolds kept the Giants at bay until the ninth, when a walk to Hank Thompson and another hit by Irvin put two on with none out. Whitey Lockman went to a full count before flying to left on a pitch “about even with his cap” (according to Durocher) or “about letter high” in the strike zone (according to Lockman).10

Thomson followed with an RBI single to make the score 6-2 and bring up Mays with two men on base against Reynolds, “who revealed that he did tire at the finish.”11 “But Mays extinguished himself as well as the ballgame by drilling into his third twin killing of the day.”12 Mays blamed misfortune for his sad hat trick: “I’m hitting the ball good,” muttered the crestfallen Mays. “It just hasn’t eyes for me. I can’t seem to find the holes in the infield.”13

Instead, the day belonged to Mays’ Yankee counterpart DiMaggio, 16 years his senior. To John Drebinger of the New York Times, DiMaggio became the emotional hero of the game: “The aging Clipper, thought by many to have slipped deep into the shadows” had smacked a two-run homer that gave the Yankees “all the inspirational lift they needed. …”14

DiMaggio had gotten tips from fellow San Francisco native Lefty O’Doul. “Specifically,” said O’Doul, “I told Joe to try to just hit the ball over the shortstop’s head. He looked terrible, really. He was doing all things he used to tell brother Vince not to do, lunging, finishing up off balance, swinging too hard.”15 DiMaggio had altered his stance by “shifting his body a little more toward the pitcher.”16

He had also switched to new lumber: “I’ve been using a 35-ounce Babe Ruth model bat. Today I used a 34-ounce model.”17

After the game, Maglie expressed displeasure with his performance. “The gopher ball I threw to DiMaggio hung, too – away out and upstairs,” he said. “I couldn’t get loose all day. Perhaps it [was] the sudden change in temperature. But that’s no alibi.”18

Refreshed by the rainout and kick-started by the DiMaggio blast, “the pendulum has swung in a new direction, toward the Yankees,” a columnist observed.19

The article was fact-checked by Kevin Larkin and copy-edited by Len Levin.

2 The Yankees faced the same daily World Series schedule in 1949 and 1950 but had deeper starter depth those two years with Tommy Byrne in 1949 and Whitey Ford in 1950 complementing Reynolds, Lopat, and Raschi. In 1951, however, Byrne had pitched so poorly that New York traded him to St. Louis on June 15 for Stubby Overmire, who proved little better, and Ford missed the entire season in military service.

3 Stengel: “I had announced Sain and I did not want to cross up the press by starting one guy after I had told them another. But the more I thought about it the more I became convinced that I might be better off starting Morgan and relieving, if necessary, with Sain. I’d probably have done that if it had not rained.” Rud Rennie, “Rain Aids Stengel: ‘Gives Us Time to Consider Stanky,’” Boston Globe, October 8, 1951: 4.

4 The weather did in 1951 what the schedule did for the Yankees in 2009, namely, allow a team with just three good starters to use just three to win the World Series. CC Sabathia, A.J. Burnett, and Andy Pettitte reprised the Reynolds-Lopat-Raschi roles.