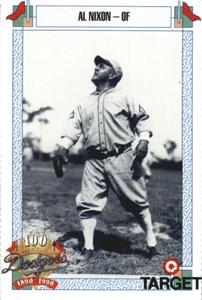 The “Rule of Three” is based upon a perception that things – good or bad – come in threes. That unscientific tenet seemed to have been substantiated in the first game of a Monday doubleheader between the Boston Braves and Pittsburgh Pirates on September 12, 1921, at Forbes Field.

The hard-fought opening contest was won by Pittsburgh in the bottom of the 15th inning, 5-4, after former 1914 “Miracle Brave” Rabbit Maranville doubled with Max Carey on first, and Carey crossed the plate when Boston catcher Frank Gibson dropped the relay for an error. Maranville had been swapped to the Pirates in January in a deal that sent outfielder and future Braves manager Billy Southworth to Boston. Maranville’s World Series championship teammate, Hank Gowdy, appeared in the Braves’ lineup on that day as well, starting behind the plate and departing for a pinch-runner in the Boston eighth inning.

It was a short (5-feet-7) and stocky (164 pounds) 35-year-old rookie Boston fly chaser, Al “Humpty Dumpty” Nixon, who encountered the Rule of Three in the September 12 contest. He’d broken into Organized Baseball in 1912 with the Portsmouth club of the Virginia League and had been toiling in the minors after cups of coffee with the Brooklyn Robins in 1915-16 and 1918.

Boston acquired Nixon from the Class-B Texas League Beaumont Exporters before the start of the 1921 season. His age ranked him as the oldest player on the Braves’ 1921 roster. Nixon was somewhat of a rarity, batting from the right side and throwing left-handed. Despite his age and stature, Nixon was regarded as fast in the field and on the basepaths with a fine throwing arm. Nixon led the Texas League in batting average (.362), runs (99), and hits (215) with Beaumont in 1919 and had been dubbed “the Tris Speaker of the Texas League.”1

Another of his claims to fame was once winning a throwing contest with a 400-foot toss. In joining the Braves, he registered a Boston major-league “first” – the initial “Nixon” to represent a Boston ballclub in a regular-season lineup. This first Nixon would be followed by four others from the Red Sox: Willard (1950), Russ (1957), Otis (1994), and Trot (1996).

Nixon arrived in Boston with a reputation for stubbornness. After his pacesetting 1919 season, he’d been selected in the minor-league draft and ended up the property of the American Association Minneapolis Millers. Citing personal reasons, Nixon refused to report and expressed his desire to remain in Beaumont. His wish eventually was granted, but it resulted in a later season debut due to the holdout.

Nevertheless, Nixon repeated his strong performance and in 89 games he batted .340, attracting the Braves’ interest. This time he indicated a willingness to relocate but again exhibited his headstrong attitude by rejecting the club’s first contract offer. His brashness did not go unnoticed as the Boston Globe reported, “Texas ‘Busher,’ Nixon, Is a Braves Holdout.”2

On February 19 Nixon agreed to the ballclub’s second offer and reported to their spring-training site in Galveston, Texas. When the Braves played a spring exhibition contest in Beaumont on March 20, 2,600 fans turned out for a “Nixon Day” celebration and presented their former six-season hometown hero with a traveling bag.

Nixon displayed his aggressive hustling style of outfield play well before September 12. On May 26 at Braves Field, during the first game of a doubleheader against the New York Giants, he was injured in the eighth inning when he crashed into the left-field concrete wall attempting to haul in George Burns’s blast. “After striking the wall he rebounded and fell to the ground, apparently knocked out, but his fighting instinct was so strong that he arose, staggered after the ball and threw it back toward the infield. Then he collapsed and had to be carried off.”3 Burns was credited with an inside-the-park home run. Fortunately, Nixon didn’t receive injuries consistent with the nickname Humpty Dumpty, but did incur a sprained right elbow and left wrist that kept him out of the starting lineup until mid-July.

This time it was Southworth who had to be carried off the field with a wrenched knee, requiring Braves skipper Fred Mitchell to rejigger his outfielders. He sent Ray “Rabbit” Powell in to patrol center and reassigned the pasture positions of Nixon and Fred “Shoemaker” Nicholson. Nixon moved to left while Nicholson took over in right.

This defensive realignment lasted until the ninth inning. As part of a score-tying rally in the Braves’ half, Mitchell used Walton Cruise as a pinch-hitter and then sent him to left field for the bottom of the inning. That necessitated Nixon’s third shift of the outing, to right.

But playing all three outfield positions was not Nixon’s only “Rule of Three” game experience. At each of his outfield posts, he recorded three putouts – a unique “Double Triple.” Nixon drew kudos for two run-saving grabs: his fourth-inning “great catch” of Walter Schmidt’s fly near the scoreboard with two on base and his eighth-inning “nifty” third-out grab of Charlie Grimm’s bid for a triple with a runner on third.4 For the 1921 season, Nixon patrolled left field in 22 games, right field in 13, and center in 12 contests.

After spending three seasons with the Braves as an outfielder, Nixon was dealt to the Phillies on April 9, 1924,5 but refused to report, echoing past behavior. He then jumped to “outlaw” independent leagues to play and manage. As a result, Organized Baseball placed Nixon on the ineligible list for two years before Commissioner Kenesaw Mountain Landis reinstated him in 1926.6 He spent the 1926-28 seasons with the Phillies.

In addition to the sources cited in the Notes, the author consulted Baseball-Reference.com, Retrosheet.org and The Sporting News Baseball Players Contract Cards Collection, accessible at digital.la84.org/digital/collection/p17103coll3.