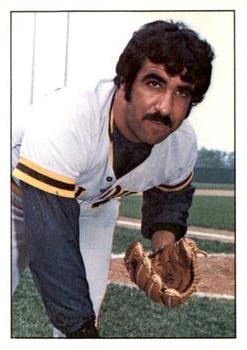 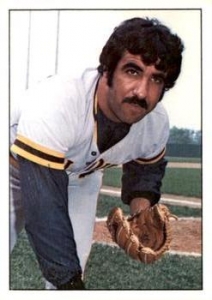 Thanks in part to a dancing forkball, Milwaukee Brewers starting pitcher Bill Travers had a fantastic start to the 1976 season.

He made the only All-Star Game appearance of his career after reaching the All-Star break with a 10-6 record and a 1.91 earned-run average. But after falling ill and losing several pounds at those All-Star festivities in Philadelphia,1 Travers struggled the rest of the campaign, and took losses in six of his last seven starts.

Luckily, the third-year starter had a mentor in the locker room: fellow forkball specialist and veteran reliever Danny Frisella.

“He was a comedian,” Travers said. “He and Ray Sadecki used to joke with the young guys and keep us from getting down. He tried to help me with my forkball. My locker was right beside his, and he was always there to cheer you up and lend a helping hand.”2

Frisella was likely in that supportive role at Fenway Park on September 23, 1976. That’s where Travers was once again shelled in a 10-3 loss to the defending American League champion Boston Red Sox, who celebrated getting back to .500 as a disappointing season went through its final stages.

But little did anyone know that the 2⅓ innings Frisella contributed in relief that day marked the final time he appeared in a major-league game.

On January 1, 1977, Frisella, 30, was a passenger in a dune buggy driven by James Wesley of Phoenix. Reports indicated that Wesley, 34, lost control of the vehicle and it rolled over on a county road north of the city limits.3 Frisella was pronounced dead on arrival at the hospital, sending shockwaves through the Brewers organization when the news reached the team a day later.

Frisella was a key reliever for the Brewers and had also spent time with the New York Mets, Atlanta Braves, San Diego Padres, and St. Louis Cardinals. He was acquired by the Brewers in a trade on June 7, 1976,5 and led the team in saves (9) and ERA (2.74) that season. He added a 5-2 record and 43 strikeouts in 49⅓ innings.

He was survived by wife, Pamela, and a 3-year-old son, Jason. Another son, Daniel, was born on March 4, 1977 – the day his father would have turned 31.6 A week before Frisella’s death, Milwaukee general manager Jim Baumer had sent him a letter with a new two-year contract.7

“It seemed like he was always positive,” said teammate Jerry Augustine. “Even if he did bad, he always had a positive outlook. He knew where his head was at. There would be times when I did bad, and he’d pat me on the back or say something and make me feel better. And it just seemed like he had everything going for him, too. He was so happy-go-lucky. Just an easygoing guy. He kept everybody so damn loose.”8

While the Brewers loved having him in their dugout, Frisella’s demeanor may have been better suited for the 1976 Red Sox, who were bottled up all season long with a championship hangover.

Boston had lost 14 of 17 games between July 9 and 26, dropping the team 10 games under .500 and dimming its hopes for a repeat AL pennant. The September 23 win over the Brewers returned the Red Sox to .500 for the first time since July’s slide. But their late-season surge came much too late to make a difference in the playoff picture.9

“We’re finally back to .500,” said Red Sox manager Don Zimmer, who returned to the dugout after missing seven games with back spasms, “and it will be a big plus if we can finish above the break-even mark after the way things have gone.”10

Boston’s hot streak continued for the remainder of the season. The Red Sox won six of their final eight games, which left them at 83-79 and 15½ games out of first place.11

In the final meeting of a four-game slate against the Brewers, Boston took advantage of optimal weather conditions and a struggling Travers early and often to build an insurmountable lead in front of a meager 6,154 faithful fans at Fenway Park.12

Milwaukee opened the scoring in the first off Bill Lee, who surrendered a one-out double to Robin Yount to kick off a rally. George Scott reached on an error by second baseman Steve Dillard, but Yount was thrown out trying to score on Sixto Lezcano’s groundball. Scott moved to second on the play and scored when Dan Thomas smacked a single to left.

The Red Sox rallied right back, scoring twice in the bottom of the frame. Rick Burleson led off with a double and Dillard walked. They advanced on a double steal and scored on back-to-back sacrifice flies from Bob Montgomery and Carlton Fisk.

Boston’s Jack Baker led off the second inning with his only career home run – which doubled as his first career hit.13 He drove an inside fastball deep over the left-field wall.14 Four batters later, Montgomery added a two-run homer to end Travers’ day with five earned runs allowed on six hits and a walk in 1⅔ innings.

“It was very discouraging,” Travers said. “Anything I threw up there, they were hitting. I threw a couple of good pitches – good for the batters – they went for home runs.”15

The outing marked the third time in the season that Travers failed to escape the second inning, and the loss evened his season record at 15-15.

“The park plays small on days like this, so you don’t throw breaking stuff,” Lee said, referring to a strong wind blowing through Fenway Park. “Bill Travers found that out.”16

With a four-run cushion, Lee settled in to retire the next seven Brewers in order before hitting Jim Gantner with a pitch in the top of the fifth. Charlie Moore and Yount followed with back-to-back singles to cut a run out of Milwaukee’s deficit, but the Red Sox’ offense once again answered right away.

Facing reliever Pete Broberg in the bottom of the frame, Boston’s Jim Rice belted a two-out, two-run home run to right for a 7-2 lead. That was Rice’s 11th hit during the series, and in the 10 games from September 15 to 23, he went 20-for-40 with four home runs. The Red Sox won nine of those 10 games. Frisella, however, struck out Rice in his final at-bat of the game in the seventh.17

Broberg’s struggles continued into the sixth, with Bobby Darwin hitting a leadoff triple and scoring on Dillard’s two-out double. Dwight Evans hit a two-run homer off Frisella in the seventh to cap Boston’s scoring.

“If we get down 5-0, that’s it,” said first-year Milwaukee manager Alex Grammas. “We’re not going to beat anybody 9-7 the way we’ve been going. We had a chance to go ahead big in the first inning. It’s that word ‘if.’ It’s a word we’ve been fighting all year.”18

Frisella settled in after Evans’ home run and struck out Darwin and Baker. In the eighth he induced three straight groundballs to Yount at shortstop. Dillard was the last batter Frisella faced.

Milwaukee’s Jack Heidemann hit a home run in the top of the ninth, and after Gantner singled, Lee induced a foul popup by Moore to polish off a complete game – his first since September 9, 1975, which was a 3-2 extra-inning loss to the Cleveland Indians.

The 29-year-old left-hander, who had started twice for Boston in the 1975 World Series, was bothered by calcium deposits in his elbow and lingering shoulder problems throughout the campaign, leaving him with a meager 5-7 record after what was his final start of the year. He missed several weeks of the season after injuring his shoulder in a brawl with the New York Yankees on May 21.

Lee scattered nine hits and struck out two against the Brewers, who fell to 68-88 and were sent to their 15th loss in 18 games.19 Milwaukee ultimately lost 22 of its final 26 games of the season and finished 32 games out of first place at 69-95. But that was nothing compared with the loss the new year brought.

Grammas remembered Frisella as a “fine guy” whom “everybody loved” and said his death left the club “heartbroken.”20

And without the wisdom of a baseball man who understood the sport’s nuances in their simplest terms – and brought poise to every game.

“You usually come in with the game in the balance. You do it or you don’t. You’re the hero or the goat,” Frisella said of his relief role in August 1976. “But if you’re the hero, you’ve got to put it in perspective. You can only enjoy it for so long – until tomorrow’s game.”21

5 Frisella was sent to Milwaukee by the Cardinals for a player to be named later, who turned out to be Sam Mejias.

9 The Red Sox won 15 of their final 18 games and were able to surpass the Cleveland Indians by a half-game to finish third in the East Division.

11 Boston won 97 games in 1977 but couldn’t beat out the eventual World Series champion Yankees for the AL East crown.

12 The attendance was Boston’s smallest home crowd since October 2, 1974, when just 5,084 fans came for the season finale against Cleveland.

13 Baker had shown promise as a minor-league power hitter, slugging 36 home runs in 1976 for the Triple-A Rhode Island Red Sox, but he played in only 14 major-league games. His last professional season was 1978.

14 Baker said of the home run: “I remember it like it was yesterday. … The game wasn’t on TV, so there’s no footage of it anywhere. So all I have is my memory of it, and I guess that’s OK. Each year I add a few feet to it. By now, it’s over the wall and bouncing around down on the Massachusetts Turnpike.” Bill Nowlin, “Jack Baker Biography,” SABR.org, Retrieved March 16, 2021 (https://sabr.org/bioproj/person/jack-baker/).