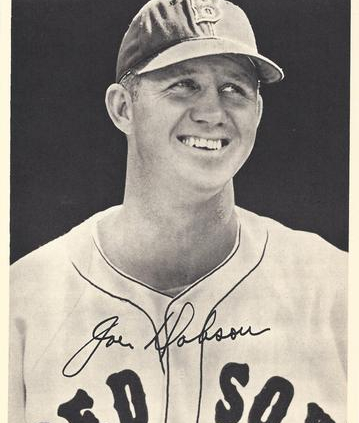 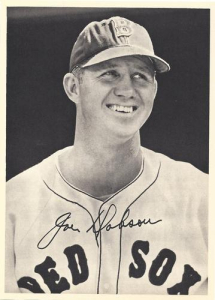 It was the next-to-last game of the 1947 season, played on a Saturday afternoon in Washington. The Senators were in seventh place and neither a win nor a loss would alter their place in the American League standings, but the Red Sox were in third place and just one game behind the Detroit Tigers. They had a chance to move up and claim second-place money, but they also had the Cleveland Indians nipping at their heels, two games behind Boston. No one had a shot at first place; the Tigers were 13 games behind the New York Yankees.

The game drew what the Washington Post termed “3,148 shivering fans, the smallest crowd of the season and half of them ladies day ‘freebies.’”1

Walt Masterson (12-15) was Washington’s starting pitcher; Joe Dobson (17-8) got the assignment for Boston.

The Red Sox jumped out to a 3-0 lead in the first inning. Merl Combs, playing third base in his 17th major-league game, led off and doubled. Shortstop Johnny Pesky bunted, sacrificing so Combs could reach third base. Catcher Al Evans pounced on the ball but his only play was to first base. Center fielder Dom DiMaggio drew a base on balls, putting runners at first and third.

An on a 0-and-2 count, Ted Williams hit a ball that “hit the top of the right-field fence and dropped over on the far side.”2 The Boston Herald described the homer almost the same way: “With two strikes on him, Ted smote the ball into right center. It struck the top of the fence and dropped over for the three-run parade.”3 It was indeed a three-run home run. Wally Moses flied out. Bobby Doerr singled. First baseman Jake Jones flied out.

Dobson retired the first three Senators in the bottom of the first.

The only Red Sox batter to reach base in the second was Joe Dobson, walked by Masterson.

Washington got one run in the bottom of the inning on a one-out solo home run by center fielder Stan Spence, hit just fair, a liner over the fence in right field. The other three batters all grounded out.

Williams singled to left field, the only Red Sox batter to reach in the third. The Senators were retired in order.

In the fourth inning, no one got on base for either team.

Boston mounted a threat in the top of the fifth. Combs struck out, but Pesky walked and DiMaggio doubled, sending Pesky to third base. With first base open, Williams was given an intentional base on balls. With the bases loaded, Moses popped up foul to third base. Doerr flied out to right field.

Three up, three down for the Senators in the bottom of the fifth.

The Red Sox loaded the bases again in the sixth inning, but once more failed to get even one runner home. As in the fifth, the first batter, Jake Jones, made an out. Catcher Roy Partee then singled to left field. Dobson laid down a sacrifice bunt, Masterson throwing to first base and Partee taking second. Combs drew a walk. Pesky singled to left field, and there was a runner on every base. DiMaggio, however, struck out. The score remained Boston 3, Washington 1.

Ted Williams led off the Boston seventh, and grounded out, hitting the ball back to Masterson. Moses struck out. Doerr grounded out, short to first.

Dobson struck out the first two batters in the bottom of the seventh. Spence singled to right, but left fielder Sherry Robertson lifted a fly ball to Doerr at second base for the third out.

The Red Sox blew open the gates in the top of the eighth. Jones started things off with a single to left field. He was dutifully sacrificed to second by Partee. Dobson reached on an error by shortstop John Sullivan, Jones going to third base. Combs singled to center field; Jones scored. Johnny Pesky doubled to left field, driving in Dobson and Combs and winding up on third base as Robertson made an error on his throw in. Masterson then threw a ball away, too—a wild pitch, letting Pesky scamper home.

Dom DiMaggio singled to left field. Ted Williams walked. Moses singled to center field and DiMaggio scored the fifth run of the inning, giving the Red Sox an 8-1 lead. Manager Ossie Bluege called on a reliever, right-hander Hal Toenes, appearing in just his third major-league game. He was 0-1 due to a start at Fenway Park a week earlier, when the Red Sox battered him for five runs in four innings. Toenes got Doerr to fly out to center field and struck out Jake Jones.

Dobson retired the side in order in the eighth.

Toenes got through the top of the ninth. He got outs from Partee, who grounded to second, and Dobson, a strikeout. Combs then singled to right and Pesky followed with a double to right. DiMaggio also hit to right field but lined out to Gil Coan. Pesky’s double was his third hit of the game and his 207th base hit of the year, the third time in his three seasons that he had hit safely more than 200 times.

Dobson faltered a bit in the bottom of the ninth, though he was working with an 8-1 lead. Yost grounded out, but Dobson walked Lyons and Coan singled to right field. First baseman Mickey Vernon had been 0-for-3 in the game. He lined out to Pesky at short. Dobson then walked Spence and the Senators had the bases full. Robertson had also been 0-for-3. Dobson struck him out for the final out of the game.

During the game, the Red Sox were watching the scoreboard and saw the Tigers beat the Indians.

The Tigers won their final two games (in fact, they ended the season winning their final five games) and held on to second place.

With his 197th career home run, Williams had given Dobson all the runs he needed with that three-run homer back in the top of the first inning. In all, he hit five home runs off Walt Masterson, dating back to 1939—career homers number 6, 42, 197, 218, and 402.

In addition to the sources cited in the Notes, the author consulted Baseball-Reference.com, Retrosheet.org, and articles in the Boston Globe and the Washington Evening Star.