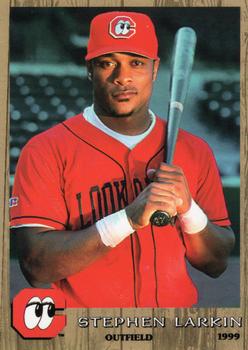 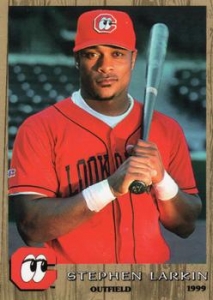 For the first time in baseball history, a major-league team’s infield was manned by two pairs of brothers. On the last day of the 1998 season, Cincinnati Reds manager Jack McKeon filled out his lineup card with Stephen Larkin at first base, Bret Boone at second, Barry Larkin at shortstop, and Aaron Boone at third. The landmark game was made possible by the Reds’ front office arranging for Stephen Larkin’s last-minute call-up to the majors.

Barry Larkin and Bret Boone were established major leaguers in 1998. Bret Boone was in his fifth season with the Reds and his seventh since making his major-league debut with Seattle in 1992. Barry Larkin was in his 13th season with the Reds, with whom he originally signed in 1985. The pair had been mainstays in the Reds lineup for the entire season. Bret Boone had earned his first All-Star selection and first Gold Glove Award, while Barry Larkin received the eighth Silver Slugger Award of his distinguished career.

Aaron Boone was in his second season in the majors in 1998. He had started the year with the Reds as a reserve infielder but was sent to Triple-A Indianapolis after batting .100 in nine games. He returned to the Reds at the end of July and took over third-base duties, previously shared by Pokey Reese and Paul Konerko, for the rest of the season.

Stephen Larkin was in high school in 1990 when he was diagnosed with hypertrophic cardiomyopathy, a condition causing enlargement of the walls of the heart. It caused him to give up sports in high school, although the Reds still drafted him out of high school in 1991.1 With his parents signing a waiver and the installation of a pacemaker, he played baseball at the University of Texas and was selected by the Texas Rangers in the 10th round of the June 1994 draft. Late in his second season in the Rangers organization, he was traded to the Reds for third baseman  Craig Worthington.

Stephen’s time in the Reds’ minor-league system was marginally productive. In his fifth pro season, 1998, with Double-A Chattanooga, where he had a mediocre slash line of .229/.288/.352 with 3 home runs and 31 RBIs in 80 games, he went on the injured list on August 14 after his pacemaker had stopped working. A week later he had it surgically replaced.2 In any other organization than the Reds, Stephen Larkin wouldn’t have gotten the call-up to the major-league team, because he wasn’t considered a prospect.

But Reds general manager Jim Bowden completed the purchase of Stephen Larkin’s contract on the day of the Reds’ last game, with the intention that the Larkin brothers would play together. Stephen Larkin said, “Bowden said he had an idea and wanted to make it happen. He wasn’t sure he would be here next year, so he wanted to do it.”3

The Larkin brothers had known for several days that Stephen would be called up. But they were surprised when Stephen was penciled into the starting lineup on the last day of the season. Barry said, “I really didn’t know he’d be starting. I’m happy as hell. It’s nice to see. I guess he’s a major leaguer now.” It had always been one of Barry Larkin’s goals to play alongside his brother.4

Other than the Reds’ novelty infield, the game between Cincinnati and Pittsburgh held no significance. Both teams were well out of contention for the National League Central Division title. This situation contributed to Bowden’s willingness to allow the unproven Stephen Larkin in the Reds’ starting lineup.

The Pirates’ Jose Silva and the Reds’ Brett Tomko drew the starting assignments in the daytime game with 19,360 in attendance at Cinergy Field.

The Reds tallied the first run of the game in the bottom of the second inning when Roberto Petagine hit a solo home run to deep left field off Silva. The Pirates countered in the top of the third, as Abraham Nunez singled and advanced to second on Silva’s sacrifice. Tony Womack’s single scored Nunez to tie the score, 1-1.

Neither Silva nor Tomko yielded a hit over the next three innings. In the bottom of the sixth, Stephen Larkin hit a groundball single in his third plate appearance. Pat Watkins ran for him. After Bret Boone filed out, Petagine followed with a single. With two outs, Aaron Boone hit a three-run home run, his second of the season, to take the lead, 4-1.

Tomko yielded only one more hit for the rest of the contest and finished with his first career complete game and 13th win. McKeon praised Tomko, whom he had been mentoring all season. McKeon said, “I’m glad to see him do what we talked about. He got tough. You get a lead, you go for it.”5 Tomko gave up five hits and struck out seven. Silva took the loss, dropping his record to 6-7 for the season.

Stephen Larkin’s debut game was his only big-league appearance. He returned to Chattanooga, where he played two more seasons. He was released by the Reds after the 2000 season and followed with four seasons in independent leagues and a season in Italy.

The Sporting News speculated that Stephen’s unlikely call-up had been a farewell gift to his brother, implying the Reds were considering parting ways with their 34-year-old All-Star shortstop in order to make room for younger players.6 Yet Barry Larkin remained with the Reds until his retirement at age 40 in 2004. He was elected to the National Baseball Hall of Fame in 2012.

Bret Boone eventually returned to Seattle, where he had the best three seasons of his career from 2001 to 2003, averaging 32 home runs and 122 RBIs and batting .301. He was third in the American League’s MVP voting in 2001. During his career, he won four Glove Gloves and was selected to three All-Star teams. Aaron Boone played in the majors for 12 seasons with six teams, including seven seasons with the Reds. He was an All-Star with the Reds in 2003. Aaron Boone became the New York Yankees manager in 2018 and still had the job in 2022.

Aaron and Brett’s family had deep baseball bloodlines. The brothers were the third generation of Boones to play in the major leagues. Their father was Bob Boone, a 19-year major leaguer who was a seven-time Gold Glove winner and four-time All-Star. Their grandfather was Ray Boone, who played 13 seasons in the big leagues and was a two-time All-Star. The Boones were the first three-generation family in major-league history.7 Aaron and Brett’s uncle Rod Boone played four seasons in the minors for Kansas City and Houston. If Bret’s son Jake (in the Washington Nationals organization as of the 2021 season) makes it to the majors, the Boones would become the first four-generation family.

The Reds’ rare lineup on the last day of the season was overshadowed by Mark McGwire’s 70th home run of the season for the St. Louis Cardinals. He and the Cubs’ Sammy Sosa (with 66 home runs) surpassed Roger Maris’s 1961 record of 61 home runs in a season.

A similar familial accomplishment occurred with the Los Angeles Dodgers on June 1, 2012. The Dodgers fielded the first infield made up of sons of former major-leaguers. Scott Van Slyke (son of Andy) was the first baseman; Jerry Hairston Jr. (son of Jerry Sr.) was the second baseman; Dee Strange-Gordon (son of Tom Gordon) was the shortstop; and Ivan De Jesus Jr. (son of Ivan Sr.) was the third baseman. The Toronto Blue Jays infield had a similar accomplishment in 2020, with first baseman Vladimir Guerrero Jr. (son of Vladimir Sr.), second baseman Cavan Biggio (son of Craig), shortstop Bo Bichette (son of Dante), and third baseman Travis Shaw (son of Jeff).8

This article was fact-checked by Andrew Harner and copy-edited by Len Levin.

4 MacGregor, “Brother, Can You Spare a Diamond.”