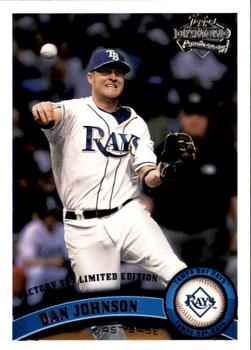 After four months and 161 games, it came down to the final day of the season.1 The Tampa Bay Rays were tied with the Boston Red Sox for the American League wild-card spot. The Rays needed to win this final game in order to complete their comeback from what was a nine-game deficit to the Red Sox on September 1 and make the postseason.2

The Rays tied the Red Sox for the wild card when they beat the Yankees 5-3 the previous night.3 Now both teams had to win their final regular-season game to keep their postseason hopes alive. Roger Mooney of the Tampa Tribune wrote, “‘Tonight’s the biggest game of the season,’ [Rays] manager Joe Maddon said, which is something he’s said nearly every day during this past week.”4

New York had clinched the AL East title a week earlier, on September 21. Yankees manager Joe Girardi did not start one of his key players, Alex Rodriguez. Rodriguez was scratched with a sore knee shortly before Girardi submitted his lineup card. He was replaced by rookie Brandon Laird, who was playing in just his 11th major-league game. Jesus Montero started at catcher so Russell Martin could before the postseason. Girardi also rested his usual starters during the final series so that they would be rested for the playoffs.

Maddon chose David Price to start the crucial game despite his struggles in September. (He was winless in five starts.) Price, who was the runner-up in the Cy Young Award voting in 2010, had struggled in 2011. He entered the game with a 12-13 record and a 3.35 ERA. The left-hander had lost his last outing after surrendering five runs, two earned, in six innings against Toronto.

Leadoff batter Derek Jeter struck out against Price, but Curtis Granderson singled and stole second. Mark Teixeira lined out to left. Then Price got Robinson Cano to hit a grounder to second baseman Ben Zobrist. The apparent easy out, however, turned into a run when the ball went between Zobrist’s legs for an error, allowing Granderson to score. Price walked Nick Swisher before getting Andruw Jones to ground to shortstop for the final out.

Price fared no better in the second. Eduardo Núñez doubled with one out, and Laird’s single put runners at the corners. Price walked Jeter to load the bases. After Granderson popped out to Evan Longoria for the second out, Teixeira hit Price’s 3-and-2 fastball out of the park. It was the first grand slam Price had given up in his career and the Yankees were up 5-0.

Teixeira came to bat in the fourth and hit another homer. The Yankees now led by six and Price was gone, replaced by Juan Cruz in the fifth.

Rookie right-hander Dellin Betances made his first start for the Yankees. In his major-league debut, on September 22, Betances struggled in a relief appearance against the Rays, walking four batters, hitting another, and allowing two runs while recording only two outs.

This time, Betances got himself in a hole in the first by walking Melvin Upton and Longoria. He got out of the jam by striking out Matt Joyce and Johnny Damon. Betances pitched a scoreless second. He was replaced by George Kontos in the third.

Kontos, also a rookie, was making his seventh appearance. The right-hander got the first two outs in the third before Girardi replaced him with left-hander Aaron Laffey. Laffey finished the inning and pitched a scoreless fourth.

The Yankees added another run in the fifth when Jones hit a solo shot over the left-field wall. Five more Yankees pitchers shut down the Rays through seven innings, making the team’s seven-run lead seem insurmountable.

As each inning passed without the Rays scoring, many of the 29,518 fans kept an eye on the scoreboard. “For most of the evening, the news from Baltimore was bad. The Red Sox were ahead, and for the longest time the news from Tropicana Field was worse. A lot worse,” observed a Tampa sportswriter.5 The scoreboard showed Boston clinging to a one-run lead, 3-2. As the eighth inning started, the Red Sox and Orioles game was delayed by rain.

Southpaw Boone Logan, the eighth Yankees pitcher, was on the mound when the eighth inning started. Logan entered with a 2.83 ERA in 63 appearances out of the bullpen. Damon led off with a single. Zobrist followed with a double. After Logan hit Casey Kotchman to load the bases, Girardi pulled him for right-hander Luis Ayala.

Ayala just needed one more out to stop the Rays rally. Longoria stepped to the plate as Rays color announcer Brian Anderson said, “These kind of situations are the ones that Evan was made for.”6 Longoria took the first pitch deep and as the ball sailed over the left-field wall, the Yankees’ seven-run lead was down to one run. It was Longoria’s 30th home run of the season; with one swing, the Rays were back in the game.

John Jaso hit a pinch-hit single. Elliot Johnson ran for Jaso and stole second. With the crowd on its feet, chanting, “Let’s Go Rays!” Damon popped out to end the rally.

Joel Peralta got the Yankees out in order in the ninth. The Rays were down to their final three outs.

Right-hander Cory Wade was called on to get the save for the Yankees. Wade had started the season in the Rays organization, spending the first two months with the Triple-A Durham Bulls before being released on June 13. He pitched a scoreless two-thirds of an inning the night before and entered the game with a 1.85 ERA.

Wade needed just eight pitches to get Zobrist to fly out and Kotchman to ground out. Maddon sent Dan Johnson to pinch-hit for Fuld. A 32-year-old lefty swinger with the second of what turned out to be six teams in his major-league career, Johnson had struggled after being recalled from the minors on September 15, going 0-for-5. He entered the game batting .108.

Johnson took two called strikes. With the count 2-and-2, he connected. “Watching it go, I’m like, ‘Stay fair. Stay fair,’” said Johnson. The ball sailed down the right-field line, barely staying fair as it went over the wall. It was just Johnson’s second home run of the season and it couldn’t have come at a better time. “The round of the bases was almost a blur. I couldn’t wait to get back [to the bench],” he recalled.7

The game was tied, 7-7. Girardi brought in Scott Proctor, the 11th Yankee pitcher. Proctor, who had joined the Yankees in a trade at the July deadline, got Jennings to ground out and send the game into extra innings.

At 11:00 P.M., roughly 10 minutes after Johnson’s home run, the scoreboard at Tropicana Field showed that the Boston-Baltimore game had resumed.

Neither team scored in the 10th or 11th. The Yankees had a chance in the 12th when the first two batters reached base. But Jorge Posada8 grounded into a fielder’s choice at third. Jake McGee, the eighth Rays pitcher, got the next two batters to keep the score tied as fans cheered and watched the scoreboard.

“As the clock approached midnight, the Orioles came back to tie the Red Sox with two outs in the bottom of the ninth.”9 When the Orioles won the game a few minutes later, the crowd sent up a roar.10

When the score was posted at Tropicana Field, Zobrist said to everyone in the dugout, “This is our game now. We have to win this now.11”???? Needs endnote

Proctor, who had pitched 2⅔ scoreless innings, struck out leadoff batter Upton in the 12th. Longoria then stepped up to the plate. With the count 2-and-2, he drilled Proctor’s next pitch over the left-field wall.

The Rays had clinched the wild card for the postseason and would play the Texas Rangers.12

“You play for almost five hours, and in the end it all came together in a matter of seconds,” Longoria responded when asked how the Rays had pulled off their miracle win. “I don’t think there’s any specific explanation for it. It’s just a bunch of guys who put together an incredible season.”13

Maddon said, “I haven’t wrapped my mind around it. I haven’t grasped it at all yet. I will at some point. I’m aware. I’m totally aware of the circumstances and our place in baseball history.”14

Rays fans celebrated wildly. “They’re resilient,” sad Chad Fontenot of Inverness, Florida. “They have the ability to work together. They’re a tight-knit organization. It’s about talent and the love of the game.” Dot Lassonde of Auburndale, Florida, echoed those remarks, saying, “It’s been wonderful. We’ve always had faith.”15

“Within eight minutes the world changed,” said Rodriguez, who had watched the game from the bench. That’s what makes baseball the greatest game.”16

1 The wild-card spots in both leagues were in play on the final day of the season. The St. Louis Cardinals and Atlanta Braves both needed a win to earn a play-in game for the National League wild card. The Cardinals beat the Houston Astros 8-0. The Braves, who were 8½ games ahead of the Cardinals for the wild card at the beginning of September, looked like winners too, but they blew a ninth-inning lead and lost to the Philadelphia Phillies in the 13th, giving the Cardinals the final spot in the National League playoffs. The Boston Red Sox and the Rays started the day in a tie for the American League wild card. The Red Sox lost their game against the Baltimore Orioles in the ninth inning and needed the Yankees to beat the Rays to let them get in the playoffs through a backdoor play-in game.

2 The Red Sox were a half-game ahead of the Yankees on September 1 but went 7-20 in September to fall behind the Yankees for the division title. The Rays were a distant third on September 1, nine games behind the Red Sox. If both teams won on the final day of the season, they would have to play a game to see who would face the Rangers.

3 The game turned on a triple play in the sixth inning. With the bases loaded and the Rays down by a run, Evan Longoria told his teammates that they needed to turn a triple play. “If it’s hit at me, I’m coming to you, Zo,” he told second baseman Ben Zobrist. One pitch later it happened. Russell Martin hit a grounder to Longoria who stepped on third and fired to Zobrist, who tagged second and threw to first baseman Sean Rodriguez to complete the triple play. The Rays took the lead in the seventh on Matt Joyce’s three-run home run to give them the win.

8 This game would turn out to be Posada’s final regular-season game after 17 years with the Yankees. He announced his retirement on January 24, 2012. Posada, a crucial part of the Yankees championship teams of the late 1990s, batted .273, hit 275 home runs, and drove in 1,065 runs during his tenure with the Yankees. He was an All-Star five times, won the Silver Slugger Award five times, and played on five World Series champions. Posada was the second Yankee catcher to hit 30 home runs in a season; Yogi Berra was the other one.

10 The Orioles scored two runs in the bottom of the ninth. The winning run came on a walk-off single by Robert Andino and Baltimore earned a 4-3 victory.

16 Waldstein. In 2021 SABR recognized baseball’s 50 greatest games of the previous 50 years, as part of the 50 at 50 celebration of the organization’s semicentennial. The list included this game as part of that collection. All of the games can be viewed in the “SABR 50 at 50: Greatest Games” collection, available at https://sabr.org/50at50/games.