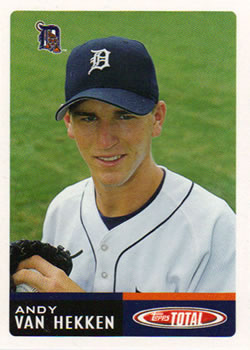 is not listed among the who’s who of Detroit Tigers legends.

But on one day late in the 2002 season, he captivated baseball with a brilliant outing – the likes of which had not been seen in the American League since 1975 – to etch his name into Tigers lore alongside a Sailor and a Schoolboy.

On September 3, the 23-year-old Van Hekken befuddled the Cleveland Indians in his major-league debut to join Sailor Stroud (1910) and Schoolboy Rowe (1933) as the only Tigers pitchers to fire shutouts in their first big-league outings. He became the 36th American League pitcher to accomplish the feat and the first since Oakland’s Mike Norris on April 10, 1975.1

“I thought he did a fantastic job with the stuff he’s got,” said 39-year-old Cleveland starter Terry Mulholland, who had thrown his first major-league pitch in 1986, when Van Hekken was 6 years old. “In today’s game he’s an anomaly. It’s all about power today. They want power pitchers and home run hitters. Here’s a kid with a decent fastball and a breaking ball, who can put a little wrinkle in it when he needs to. His reward tonight was a nine-inning shutout.”2

The 4-0 win in front of 11,365 fans at Comerica Park was Detroit’s first at home since August 20, snapped a five-game overall losing skid, and evened the final series of the season between the struggling American League Central Division rivals.3 The Tigers improved to 51-87 with the win, but won just four more games the rest of the year – against 19 losses – to finish 55-106. Van Hekken didn’t fare any better, taking three losses and a no-decision in his final four starts of the season.

Nevertheless, Van Hekken arrived as a flicker of hope in the second-worst campaign in Tigers history as of 20214 – though his promotion caused quite a stir in Toledo, where Detroit’s Triple-A affiliate was having a renaissance. Van Hekken was promoted to the Toledo Mud Hens on July 26 after opening the season at 4-7 with a 3.83 ERA for Double-A Erie. In Toledo, he boasted a 5-0 mark and a 1.82 ERA, helping the Mud Hens finish two games ahead of the Louisville Bats for the West Division title in the International League.

That gave Toledo its first division title in 34 years, but with Van Hekken gone to Detroit, the Mud Hens had to compete in the postseason without their ace, prompting Toledo Blade columnist Dave Hackenberg to write, “You can call the Tigers big league if doing so helps you sleep nights.”5

Detroit’s front office, however, didn’t find the decision at all controversial.

“We talked about what would be better for him, pitching in the playoffs in Triple-A or pitching for the Tigers,” said Tigers manager Luis Pujols. “Everyone agreed that the big leagues is the big leagues and he should be here.”6

Van Hekken’s absence didn’t seem to matter – the Mud Hens were swept by the Durham Bulls in the opening round of the postseason.7

He was sharp to open his big-league debut, retiring the first three Indians hitters and then working out of a jam in the second. He walked Jim Thome to open the inning and Karim Garcia followed with a single. After Greg LaRocca flied out, Van Hekken got Josh Bard to hit into an inning-ending double play.

Detroit’s Carlos Peña beat out an infield single to open the second inning and scored when Craig Paquette followed with a double into the right-center-field gap. Matt Walbeck lined a single to right to put runners on the corners, and Paquette scored when Ramon Santiago rolled into a double play. In the third, Randall Simon drew a two-out walk and scored on Robert Fick’s triple to left-center for a 3-0 Tigers lead.

Paquette opened the fourth with a single and moved to second when Santiago grounded a one-out comebacker to Mulholland for the second out. Hiram Bocachica beat out an infield single on the next pitch, and Paquette scored on a throwing error by LaRocca, Cleveland’s third baseman.

“In the first four innings, everything you didn’t want to happen, happened,” Mulholland said. “Then my curveball and slider came around and I was able to keep the game in hand.”8

Mulholland suffered his first loss of the season to fall to 2-1 but pitched into the eighth inning. He scattered 11 hits and struck out five – four of those punchouts came consecutively across the sixth and seventh innings.

In the sixth, Van Hekken escaped another jam. After allowing singles to Milton Bradley and Ellis Burks, he got Thome to ground to first for Detroit’s second double play of the game.

“In the last three or four years, he has shown a knack for getting hitters out that I wish we could teach,” said Steve Boros, Detroit’s director of minor-league instruction. “He has the most poise of any young pitcher I’ve ever seen. Every time he gets into a tough situation, it seems that he gets a double play.”9

The Indians put runners into scoring position in each of the final three innings, but Van Hekken continued to work out of jams like a veteran. In facing those extra hitters, Van Hekken saw his pitch count rise very close to his predetermined limit of 100 pitches, but Pujols wasn’t about to lift the Holland, Michigan, native – approximately 170 miles west of Detroit – from a shutout because of a handful of pitches.

“Those people were going to shoot me if I took him out,” said Pujols, who was likely aware a contingent of about 100 of Van Hekken’s friends and family members were in attendance. “I’m sorry I lie. He went (14) pitches over the limit. But the chance to pitch a complete-game shutout in your major-league debut … I’ll make up the (14) pitches somewhere, somehow.”10

The Indians tried to rally in the ninth. LaRocca led off with a double, but Van Hekken retired the next three hitters to join Jeff Weaver as the only Tigers pitchers to hurl a shutout in 2002. (Weaver had an American League-leading three.) Cleveland got a runner to second or third in six innings but went 0-for-12 with runners in scoring position.

Van Hekken was recalled to start in place of Jose Lima, a 29-year-old who was three years removed from a 21-win season. Lima was floundering with a 4-6 record and 7.77 ERA and was released on September 7.

“If I can’t pitch on this team – the worst or second-worst team in baseball – where am I going to pitch?” said Lima, who pitched for four more seasons. “If I can’t start on this ballclub, I must be the worst pitcher on earth.”11

Lima went 21-8 for the Kansas City Royals and Los Angeles Dodgers over the next two seasons and called it a career in 2006, while Van Hekken wouldn’t win another game in the majors. He instead enjoyed a long, unconventional career that took him across the globe until he retired after the 2018 season. Van Hekken played in the top professional leagues in Japan, Korea, Taiwan, Mexico, Venezuela, and the Dominican Republic, but he never pitched another major-league game after his September call-up. That left him as the 26th pitcher in major-league history whose only career victory was a shutout. (No other Tigers player is on the list.) However, with the introduction of Negro League statistics to Baseball Reference, Van Hekken would be the 32nd.

“I am thankful that I got a chance to pitch in the (big) leagues. I realize how hard it is to get called up in the first place. It was a special night. I am thankful to have a veteran catcher back there in Matt Walbeck. I was able to stay calm and he guided me through the game and it turned out the way it did,” Van Hekken said. “It was fun to celebrate with my family and have them all there watching. Every once in a while, I saw one of them creep closer in the stands. There was a caravan that came from Holland and they made a lot of noise. I could definitely hear where they were.”12

1 Seven National League pitchers threw a shutout in their major-league debut between Norris and Van Hekken. Through 2020, no pitcher in either league had repeated the feat.

3 The Indians fell to 60-77 with the loss, but they won the next day to take the three-game series and finish 10-9 against Detroit for the season.

7 Durham faced the same fate as the Mud Hens, when its ace, Lance Carter – who had won seven straight starts – was called up to the Tampa Bay Devil Rays prior to the IL’s playoffs. The Bulls went on to win the Governor’s Cup.