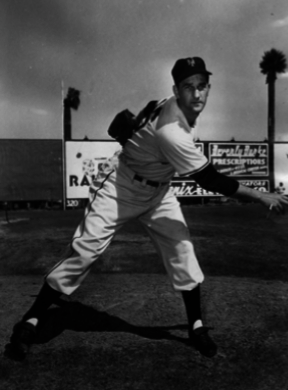 As the 1951 National League season entered its final weekend, the New York Giants and Brooklyn Dodgers were tied for first place. That the Giants and Dodgers were tied was amazing, since the Giants trailed the Dodgers by 13½ games on August 11. The Dodgers had fallen into a tie by losing to the Philadelphia Phillies, 4-3, on Friday night, September 28. Both the Dodgers and Giants recorded shutout victories on Saturday with Sal Maglie of the Giants defeating the Boston Braves and Warren Spahn at Braves Field in Boston, and Don Newcombe of the Dodgers shutting out the Phillies and Robin Roberts 5-0 in Philadelphia.

So the Giants and Dodgers were deadlocked as the Sunday games, the last of the regular season, were to begin. For the Giants, manager Leo Durocher called upon 21-game winner Larry Jansen to start. Tommy Holmes, the Braves player-manager, sent Jim Wilson to the hill. In Philadelphia, the Dodgers’ Preacher Roe and the Phillies’ Bubba Church were the starters.

The Giants and Braves had made a blockbuster trade at the winter meetings the previous December. The Giants received Eddie Stanky and Alvin Dark from the Braves in exchange for Sid Gordon, Willard Marshall, Buddy Kerr, and Red Webb.1 Five of the players, all but Webb, were in the starting lineups on this Sunday afternoon. Also, Walker Cooper, the Braves catcher, was a former Giant. No doubt the ex-Giants hoped to knock their former team out of the pennant race. And Stanky and Dark before leaving Boston had developed an acrimonious relationship with Billy Southworth, who was the Braves manager at the time.2

In the top of the first for the Giants, Dark singled to right after one out but was stranded at first. Bob Addis led off the bottom of the first for the Braves with a double to right field. Sam Jethroe flied out to left, and Earl Torgeson’s grounder to second moved Addis to third, and Gordon’s single drove him home for a 1-0 lead. With one out in the Giants’ second, Bobby Thomson hit a game-tying solo home run to left field, his 30th round-tripper of the season. In the bottom of the second, Jansen retired the Braves in order.

Jansen and Stanky singled to start the Giants’ third. Stanky was out at second on Dark’s groundball. Jansen went to third and scored on Don Mueller’s single to right. Dark took third on Monte Irvin’s force-play grounder, then Wilson walked Lockman, loading the bases, but Thomson flied out to Jethroe in center, stranding the runners with the Giants ahead 2-1.

The fourth inning saw both teams go down in order. In the top of the fifth, Dark singled to center with one out and stole second. After Mueller flied out to right field, Irvin drove Dark home with a single to left, giving the Giants a 3-1 lead. Jansen retired the Braves in order in the bottom of the inning. In the top of the sixth, Thomson led off with a single but was thrown trying to steal second as Willie Mays struck out. Wes Westrum ended the inning by grounding out. Johnny Logan, pinch-hitting for Wilson, led off the sixth for the Braves by striking out. Addis flied out, then Jansen walked Jethroe, ending his string of 15 batters in a row retired. Jethroe was stranded at first as Torgeson struck out for the third out of the inning. Given the clouds forming over Braves Field, the lights were turned on to begin the sixth inning.3

In the top of the seventh, Max Surkont came in to pitch for the Braves. Dark continued his hot hitting with a two-out double to left field. Mueller failed to bring him home, grounding out to shortstop. The Braves went out in order in the bottom of the seventh. In the top of the eighth, Thomson walked with two outs, but Mays grounded out to third.

Sibby Sisti struck out to begin the Braves’ eighth. Manager Holmes called upon himself to bat for Kerr. He flied out to center field. Slugger Bob Elliott pinch-hit for Surkont and became Jansen’s sixth strikeout victim. Vern Bickford pitched the top of the ninth for the Braves and retired the Giants in order.

In the bottom of the ninth, the Giants had a 3-1 lead. If they held on, they would do no worse than tie for the lead and force a playoff. Jansen was still on the mound. Braves left fielder Bob Addis led off the ninth as he had led off Braves first, with a double to right field. Jethroe flashed his speed and beat out a hit to the right side; Addis went to third base. With two runners on and no outs, Torgeson grounded to shortstop, where Dark grabbed the ball and tossed to Stanky for a force play as Addis scored. Gordon, with 29 home runs and 109 RBIs and representing the winning run, grounded to Dark, who threw to Stanky at second for the second out. Cooper, another formidable slugger (18 home runs), legged out an infield hit to third. Willard Marshall came to the plate, the third ex-Giant in a row to bat. Marshall made good contact but it was right to Irvin in left field for the third out. The Giants celebrated at the mound and carried Jansen to the dugout.

As the game ended, the scoreboard showed that the Phillies were leading the Dodgers in Philadelphia.4 A Dodgers loss would give the Giants the National League pennant. As the Giants showered and dressed to catch their train to New York, there was great anticipation that the flag would be theirs. However, in one of the Dodgers’ greatest games, they refused to die and defeated the Phillies 9-8 in 14 innings on Jackie Robinson’s home run. In the bottom of the 12th inning, Robinson had made an unbelievable catch of Eddie Waitkus’s line drive up the middle with the bases loaded and two outs to save the game. The Giants learned of the Dodgers victory on the train back to New York.5

Larry Jansen’s complete-game victory was his 22nd of the season. Jansen commented after the game, “I was never really worried, not even in the ninth inning.”6 While Jansen may not have been worried, Durocher admitted that he was nervous after the double by Addis to lead off the ninth.7 The ebullient Durocher then exclaimed, “What a game, what a game. What a hit that Irvin gave us. He’s been hitting the big ones for us all year.”8 Irvin with his game-winning single recorded his league-leading 120th RBI. Thomson (home run) and Dark (three hits) also contributed offensively. Addis with two doubles and two runs scored was the hitting hero for the Braves and a thorn in the side of the Giants.

As both the Giants and Dodgers arrived back in New York, they were greeted by their fans. Five thousand Giants fans, by police estimation, greeted the Giants at Grand Central Station, and 2,000 Dodgers fans were at Pennsylvania Station.9 While both teams were probably a bit weary, they had to be ready to play each other at 1:30 P.M. on Monday at Ebbets Field in the first game of a best-of-three playoff. On the previous Thursday at a coin-tossing ceremony at National League headquarters, owner Horace Stoneham of the Giants called the toss but lost. Jack Collins, the Dodgers business manager, selected the playoffs to begin at Ebbets Field with the second and the third game, if needed, to be played at the Polo Grounds.10 As fandom knows, the playoff culminated in Bobby Thomson’s “Shot Heard ’Round the World.”

In addition to the sources mentioned in the Notes, the author consulted the Baseball-Reference.com and Retrosheet game logs: