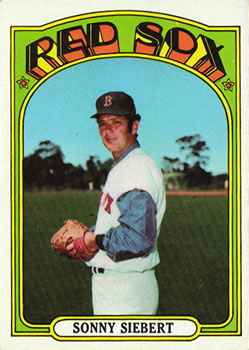 On the morning of September 8, 1972, Red Sox fans woke up to a reality unthinkable just a month and a half before – the Old Towne Team was in first place in the American League East. On that auspicious Friday morning, Boston Globe writer Ray Fitzgerald summed up the turn of events when he wrote:

“We were wrong, all of us. The pundits of play said this was a team of hum-drums and ha-has. … But Eddie Kasko’s bunch made it. The Jersey St. gang survived mixups in the outfield, the trading of Sparky Lyle, the disappearance of Carl Yastrzemski’s power, the injuries to Luis Aparicio, Doug Griffin, Duane Josephson, and Ray Culp, the failure of the bullpen.”1

The Red Sox had endured injuries, slumps, doubt from the media, and a start that saw them linger under .500 until July 18. They were helped, of course, by the fact that the entire division had a slow start, a fact that prompted Boston sportswriter Harold Kaese to opine on July 31 that no team in the division deserved to make the postseason.2 As Kaese wrote those words, however, the Red Sox were a mere one game over .500 and seven games back of the division lead. In a division that was bad, the Red Sox were undistinguished.

But yet they rallied. Or perhaps more accurately, the best in the division collapsed. For much of 1972, the AL East was a race between the Detroit Tigers and Baltimore Orioles, the division’s first competitive race since baseball had reorganized in 1969.3 For the first three years of divisional play, the Orioles had run away with the AL East each year, winning over 100 games every time. The closest competition in those three seasons was the Tigers in 1971, and they finished 12 games back. But Earl Weaver’s team regressed in 1972, largely driven by a decline in production at the plate,4 and the division title was suddenly open to challengers.

The Tigers were in their second season with manager Billy Martin, who was brought in after a lackluster 1970 season. The Tigers were performing about the same as they had in 1971, but Baltimore’s struggles had allowed them to catch up.5 Meanwhile, the Red Sox and New York Yankees languished in third and fourth place for the early part of the season, struggling to get above .500.

By the end of July, the Orioles and Tigers had a four-game cushion on the third-place Yankees, who were contending for the pennant for the first time since 1964. But the front-runners’ August misfortunes allowed the Red Sox and Yankees to turn it into a four-team race. The Tigers were 12-18 in August while the Orioles were only slightly better at 15-15. The Red Sox and Yankees were 17-12 and 19-14, respectively, during that same time period.

As the calendar turned to September, the four teams were separated by a mere two games. The Red Sox started September by taking four of their first five games. The Yankees won four out of six in the same span, including two wins over the Orioles. As the Yankees arrived in Boston on September 6 for a three-game series, both the Red Sox and Yankees sat in a tie for second place, a mere half-game behind Detroit. Both were looking to lead the division for the first time in the season. At the same time, the Tigers landed in Baltimore for a three-game series.

The Red Sox took the first game of the series, 2-0, while the Tigers defeated the Orioles, 4-3. The Red Sox were still a half-game behind the Tigers but now had an undisputed hold on second in the division. The Yankees sat in third, a game and a half back, and the Orioles were in fourth, two games back.

The Red Sox took the field again on September 7, set once again to try to take the division lead. Kasko sent Sonny Siebert out to the mound for Boston while Yankees manager Ralph Houk started Steve Kline. Kline entered the game with a league-best 1.71 ERA and a 15-5 record.6 If the Sox were going to take the division lead, they had to overcome the formidable Kline and hope for a Tigers loss in Baltimore.

It didn’t take the Red Sox long to get to Kline. In the bottom of the first, he walked the leadoff hitter, Tommy Harper. With Luis Aparicio batting, Harper broke for second. Yankees catcher Thurman Munson’s throw went past second baseman Horace Clarke and into center field, which allowed Harper to advance to third.7 A sacrifice fly from Aparicio brought Harper home and gave the Red Sox an early 1-0 lead.

Just as he had in the first, Siebert worked through a one-two-three second inning. Kline looked to be getting back on track in the bottom of the inning when he induced a groundout from Carlton Fisk and struck out Ben Oglivie. But he soon once again found himself in trouble. Singles by Doug Griffin and Sonny Siebert put two men on base as the lineup flipped over and Harper came to the plate for his second at-bat. Harper took full advantage of the situation by sending a three-run home run over the left-field wall to put the Red Sox up, 4-0.

Siebert found himself in trouble for the first time in the top of the fourth after a pair of singles put Bobby Murcer and Thurman Munson on first and second with none out. Roy White struck out for the first out. The next batter, Ron Blomberg, grounded out, advancing Mercer and Munson to second and third. Johnny Callison’s single drove in both runners, narrowing the gap to 4-2.

The stakes for the Red Sox were increasing as the night wore on. The Orioles and Tigers had started their game at the same time, and Baltimore had a 7-0 lead by the end of the second inning. With the Tigers needing a huge comeback to win their game, the Red Sox looked all but certain to take the division lead if they could hang on to their lead over the Yankees.

In the bottom of fifth, the Red Sox began to clear up any uncertainty that they would take advantage of Detroit’s misfortunes and take the division lead. Kline gave up a leadoff single to Yastrzemski and then walked Reggie Smith. He followed that up by striking out Rico Petrocelli and Fisk, which appeared to turn the tide back in his favor. But Oglivie hit a two-out double to left field to score Yastrzemski and Smith to give the Red Sox a 6-2 lead.

As the innings ticked away in Baltimore, the Tigers were failing to mount any offense and the Orioles still held a commanding 7-0 lead. In the bottom of the sixth inning, the Red Sox piled onto their lead when pitcher Siebert hit a leadoff home run to left field to make it 7-2.

The Red Sox siege continued. Harper was hit by Kline. Aparicio followed with a fly ball to right for the first out. Kline exited the game after Aparicio’s at-bat and was replaced by Wade Blasingame. Blasingame’s first batter was Yastrzemski, whom he walked after a wild pitch that moved Harper to second. Smith popped up to short right field for the second out.

But the Red Sox had one more two-out hit in their arsenal. Petrocelli hit a three-run home run for a 10-2 Boston lead. Eight Red Sox runs had come with two outs.

The Red Sox and Tigers battled down the stretch, with the two teams exchanging the division lead or tying in the standings several times as the season came to a close, never separated by more than two games in September. The Red Sox entered their final series against Detroit with a half-game lead in the division but lost two out of three to the Tigers, losing the division by a half-game.

3 In 1969, the American and National Leagues were each split into two divisions, an East and West Division, in order to accommodate the addition of the Montreal Expos, Kansas City Royals, Seattle Pilots, and San Diego Padres.

4 In 1971 the Orioles led the American League in on-base percentage and batting average. In 1972 both metrics were below the league average Their pitching staff led the league in earned run average and runs scored but it was not enough to prevent the regression that led to a competitive race in 1972.