The accessibility of the Deadball Era derives, in part, from the many existing images of players from the period. It is worthwhile to recall that some of the most vivid and enduring player portrayals are on contemporary baseball cards. The most famous Deadball Era cards are from the T205 and T206 sets, which are large, comprehensive, and relatively available tobacco issues (with some notable exceptions). Still, many collectors prefer the 1914-1915 Cracker Jack cards even if these cards are more expensive and difficult to locate, as they likely are the most impressive baseball cards issued during the Deadball Era. The Cracker Jack cards (sometimes known by the E145-1 designation for the 1914 set and E145-2 for 1915, with caramel cards having an ‘E’ set designation rather than ‘T’ for tobacco) are a wonderful window into the Deadball Era in the middle of its second decade.

With a clean presentation and bright red backgrounds, the Cracker Jack cards had the most eye-appeal of any card issued to date. Today, some collectors still consider them to be the most attractive baseball card design ever produced. These 2-1/4” by 3” cards were also nearly twice as large as most of their tobacco card counterparts and included the most biographical detail of any baseball card yet manufactured. But it is the detailed artwork and many action poses which make this set a perennial collector favorite. In some sense, these are baseball cards doubling as art.

Here, among the Cracker Jack cards, are the best baseball card images of Shoeless Joe Jackson’s swing, of Walter Johnson’s pitching motion, and of Ty Cobb’s glare. The action shots, too, are magnificent: Chick Gandil reaching for a ball at first base is a beautifully done horizontal image, as is that of Ray Keating pitching. Then there are the catcher poses, with Hick Cady, Ted Easterly, Les Nunamaker, Frank Owens, and Wally Schang shown in action in full catcher’s gear. The portraits of Charles Comiskey and Connie Mack seem to capture their respective professional reputations. If you would like to see a commanding picture of John McGraw, a side view of Gavvy Cravath at bat, or a pensive pose of Honus Wagner, these sets are the place to look. Surely, no better card of Smoky Joe Wood has ever been produced than in the Cracker Jack sets, and there is a sometimes-overlooked card of Branch Rickey as manager of the St. Louis Browns. As many have noted, what is missing is a card of Babe Ruth in either set, a real incongruity since so many lesser names are included. But, except for Ruth, there is really nothing missing from these relatively small sets. 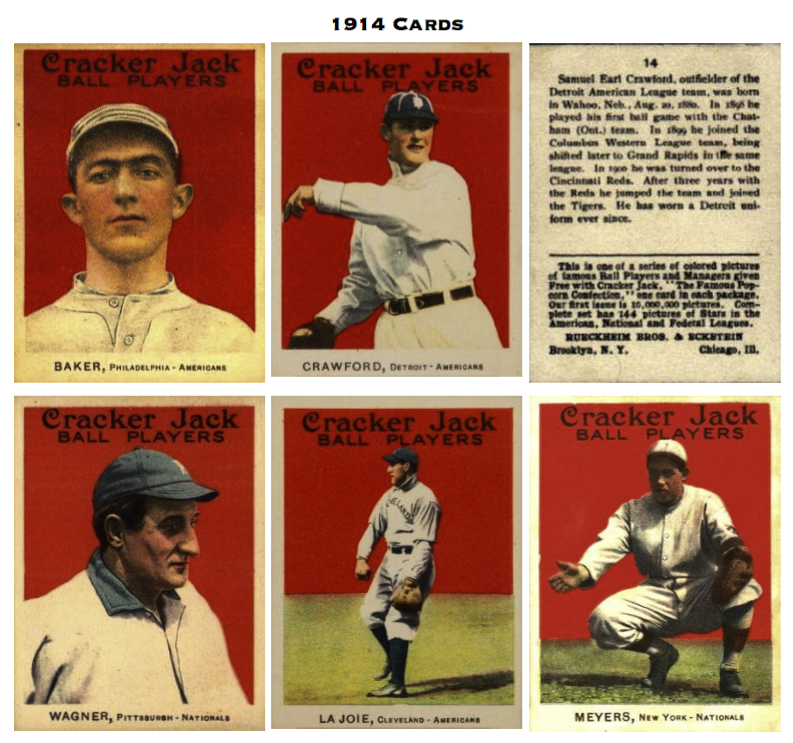 The 1914 Cracker Jack cards are significantly more scarce than the ones issued in 1915. “While collecting complete sets from either year is tough, there is no question that the 1914 set is infinitely more difficult to acquire, and it all comes down to the way the cards were distributed,” wrote Joe Orlando, president of Professional Sports Authenticator (PSA) and PSA/DNA, in a chapter about the origins of the cards in The Cracker Jack Collection: Baseball’s Prized Players (Peter E. Randall Publisher, 2013) by Tom Zappala and Ellen Zappala. Orlando said that the 1914 cards were distributed only in packages of Cracker Jack, making the cards more susceptible to damage, while the 1915 cards were available both in packages with the candy and also through a mail-in redemption where the entire set could be acquired for “either 100 coupons or one coupon plus a whopping 25 cents!” Add to it that the 1914 cards were printed on thinner card stock than their 1915 counterparts, and it is clear why so few of the former exist in top condition.

As Orlando outlines (see Zappala and Zappala, pp. 163-173), the 1914 set has 144 cards, while the 1915 version has 176. For most part, the first 144 cards are identical between the sets, as they have the same players and poses. Two players have different poses from the first year to the second: Christy Mathewson and Del Pratt each have an action pose in 1914 and a portrait in 1915. The 1914 Mathewson card, is, by far, the most popular and expensive Cracker Jack card, but it is very difficult to locate. The PSA website notes than one in excellent condition sold for $95,000 in 2012. Four players (Harry Lord, Jay Cashion, Nixey Callahan, and Frank Chance) have cards in the 1914 set but not in the 1915 edition. The final thirty-two cards of the 1915 set (Nos. 145-176) are not included in the 1914 version. A few cards from 1914, as Orlando notes, were replaced from 1914 to 1915: Rollie Zeider’s standing pose (he had two cards in 1914) was removed for Oscar Dugey, and Hal Chase would take the place of Frank Chance. 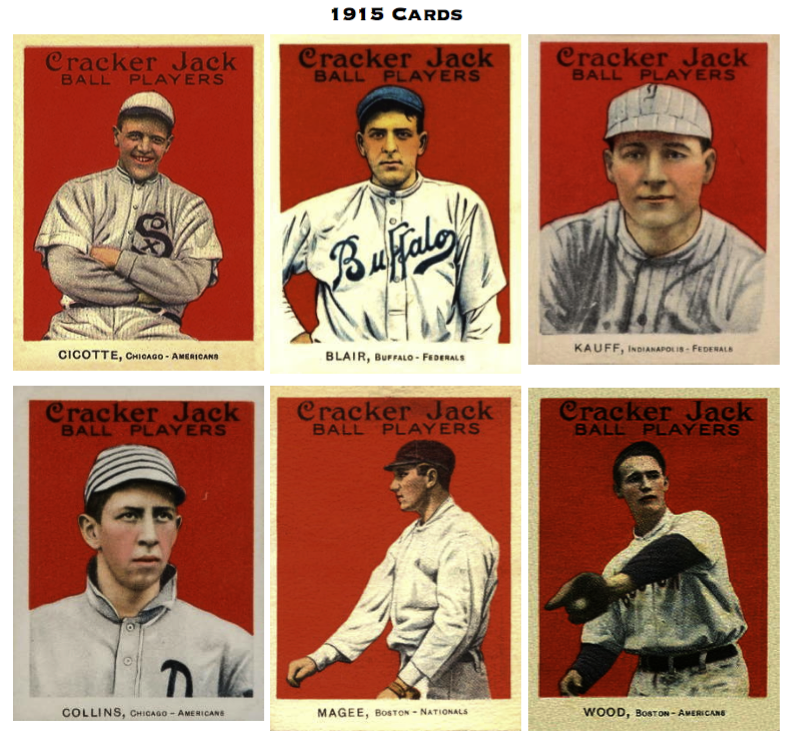 The easiest way to tell the 1914 and 1915 cards apart is that the backs of the latter were printed upside down “so the card information could be read while mounted in the specially-designed albums (available by mail order for the 1915 set only),” wrote Orlando. He notes, though, that some 1915 cards show some staining from glue, likely used to keep the cards in these albums.

The backs of the cards are succinct, usually outlining each player’s basic biography and how he got to the major leagues, occasionally capped with understated praise. Cobb “is noted as a marvel for speed and batting.” Wagner, his card says matter-of-factly, “has batted over 300 (sic) for ten years.” Rabbit Maranville with Boston “has been a great success.” At the bottom, the card backs in 1914 note that the company’s first issue is “15,000,000 pictures,” while the 1915 backs detail the offer for the complete set and to acquire what the company called the “Handsome Album to hold (the) full set of pictures.”

An oft-forgotten component of these sets is their Federal League players including Rube Marquard who is erroneously identified as being with the Brooklyn Tip-Tops, and Artie (Circus Solly) Hofman, whose surname is misspelled as ‘Hoffman’. George Suggs’ uniform as a member of the Baltimore Terrapins stands out, while Bill Rariden is shown in his Boston Braves uniform in spite of having joined the Federal League’s Indianapolis Hoosiers, as his card notes. Rollie Zeider’s standing pose clearly shows the word ‘Feds’ on his Chicago uniform, and the bold word ‘Buffalo’ across Walter Blair’s chest is a clear indication that things were different in baseball during 1914 and 1915.

These sets distinctively capture the individuality of many players. Though the artwork can vary in its quality (Max Carey’s card, for one, is not the sharpest), it is fair to say that the portrayals often capture the essence of well-known players, and particularly of the top stars. Fred Clarke’s sitting pose gives an air of focused effectiveness, and Sam Crawford’s throwing motion offers a contended, carefree style. The grit and crustiness of the era also come through in Doc Gessler’s swing or in Sherry Magee’s throwing pose. Eddie Cicotte’s easy smile on his Cracker Jack cards, alas, is reminiscent of a time before scandal hit the sport. In the Cracker Jack cards, no two poses or portraits look the same, making the set stand out from those which often repeat similar images.

A card of a common Cracker Jack player in very good condition, which is to say, showing considerable wear, will likely cost between $150 and $200. Because of the demand for these cards and their relative scarcity, a star player will likely cost more than $500, with steep increases in price as condition improves even marginally. Cards issued in 1914, of course, almost always command a higher price. It speaks to the endurance of the Deadball Era and its players that desire for these cards remains so solid and strong more than a century after they were produced.

Many vintage baseball card collectors begin with the T205 and T206 sets because those sets include more players, and most cards are available for about half of the price of the Cracker Jack cards. That is a fair approach. At the same time, while very different in appearance from traditional tobacco cards, the Cracker Jack sets include artwork that is at least as good, if not better, as well as an array of player poses and biographical detail not found in other contemporary card sets. These cards justifiably play a part in the telling of the story of the Deadball Era.