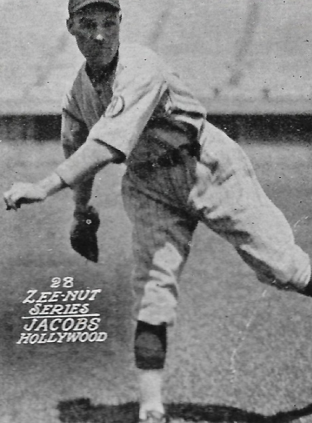 When the Orioles “threatened in the eighth, [relief pitcher] Lefty Jacobs took over and in his usual manner made short work of the rally idea.”1 — Baltimore Sun, May 9, 1938 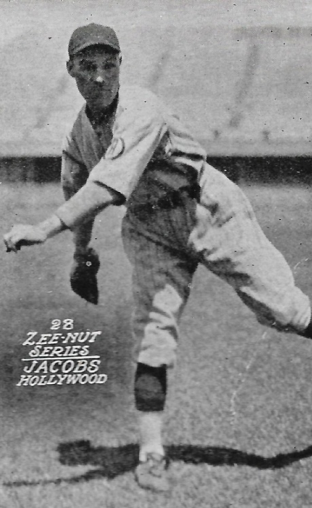 Art Jacobs was an itinerant minor leaguer from 1923 to 1941. The southpaw began his career as a starting pitcher and in his best season achieved a 25-7 record for the 1931 Western League Wichita Aviators. In later years, he was a crafty relief specialist, delivering a screwball like the one made famous by Carl Hubbell. Jacobs had a “cup of coffee” in the majors: one inning pitched for the 1939 Cincinnati Reds.

Arthur Evan Jacobs was born on August 28, 1902, about 15 miles south of Toledo in Troy Township, Wood County, Ohio. He grew up on a family farm there, the eighth of 12 children born to Fred and Anna Mary (Friedle) Jacobs. Fred’s parents and Anna were from Switzerland.2

Art attended Pemberville (Ohio) High School and pitched for the school team.3 He began his professional career on the 1923 Cedar Rapids (Iowa) Bunnies of the Class-D Mississippi Valley League. His older brother Dewey was a catcher on the team.4 Art had a stocky build; 5-feet-10 and 170 pounds. On June 2, 1923, he hurled a one-hit shutout at Rock Island, Illinois.5 Four days later, he shut out Dubuque, Iowa, 7-0; the losing pitcher was 52-year-old “Iron Man” Joe McGinnity.6

Jacobs finished his rookie year with a 17-12 record. He began the 1924 season at Cedar Rapids and was traded midseason to Rock Island. The next year he moved up to the Class-B Michigan-Ontario League and compiled a 15-7 record for the Saginaw Aces, including an 11-inning shutout against London, Ontario, on August 11, 1925.7 A month later he married Ethel Mary Broka in Saginaw. She bore him a son, Theodore, who died young from pneumonia.8

Upon the recommendation of scout Hooks Wiltse, the New York Yankees signed Jacobs to a contract, and he went to spring training with the team in 1926.9 He did not make the team, and his contract was acquired by the Reading (Pennsylvania) Keystones of the Double-A International League. He injured his back in June and sat out the remainder of the season.10

Over the next four years, Jacobs bounced from team to team: the 1927 Hollywood Stars; Los Angeles semipros in 1928; Rochester, New York, and Quincy and Bloomington, Illinois, in 1929; Bisbee and Miami, Arizona, Decatur, Illinois, and St. Joseph, Missouri, in 1930. When the Wichita Aviators acquired his contract in January 1931, expectations were low for the much-traveled southpaw.11

The Aviators were the defending champions of the Class-A Western League. It is not known why Art Griggs, manager and co-owner, took a chance on the unheralded Jacobs, but the gamble paid off. Jacobs wowed with a 25-7 record. He led the league in wins and ranked third in ERA (3.42). He was a capable left-handed batter and hit .307 in 114 at-bats.

In November 1931, Jacobs was acquired by the Portland Beavers of the Pacific Coast League. He pitched for the Beavers in 1932 and 1933, and helped them win the 1932 PCL championship. His combined record for the two seasons was 28-14. Manager Spencer Abbott used him as both a starter and reliever. Jacobs was regarded as a smart pitcher who did not overpower hitters but kept them guessing with a shrewd combination of pitches. He alternated his fastball with a change-of-pace, curveball, and his forte, a screwball, which was “almost as deceptive as that of Carl Hubbell.”12 Jacobs was “equally effective against right and left-handed batters,” said Abbott.13

In the offseason Jacobs resided in Los Angeles and pitched for local semipro teams. The dominant team of the 1933-34 California Winter League was the Elite Giants, a collection of Negro stars that included Satchel Paige, Cool Papa Bell, Mule Suttles, Turkey Stearnes, and Willie Wells.14 As a member of the White King Soapsters, a team representing a Los Angeles soap company, Jacobs pitched against the Elite Giants on November 4, 1933. He allowed 21 hits, yet the Soapsters prevailed, 14-9. Bell, Suttles, Stearnes, and Wells combined for 10 hits.15 On February 4, 1934, for a team representing the May Company, a Los Angeles department store, Jacobs again faced the Elite Giants. This time Paige was the opposing pitcher, and the Elite Giants won, 8-0, as Paige hurled a two-hit shutout and struck out 12.16

In 1934 Abbott became manager of the Atlanta Crackers of the Southern Association, and he brought Jacobs with him. On April 3, Abbott gave Jacobs a daunting assignment: pitch to the New York Yankees in an exhibition game in Atlanta. In the first inning, Jacobs walked Red Rolfe. Babe Ruth knocked a single up the middle; and Lou Gehrig blasted a long home run into the right-field stands. The onslaught continued, and the Yankees batted around. Gehrig came up for a second time in the inning, and with Myril Hoag and Ruth on base, he again homered to right field — two home runs and six runs batted in for Gehrig in the first inning! Sportswriter Grantland Rice described Gehrig’s home runs as “tremendous wallops that left trails of smoke in their wake.”17 The Yankees scored 11 runs in the initial frame en route to a 19-8 victory over the Crackers. Jacobs surrendered 13 runs in four innings of work. “It must be said to the credit of Mr. Jacobs, the Cracker starter, that he stayed in there and took his medicine like a man,” wrote reporter Jimmy Jones.18

Jacobs was bothered by arm trouble in 1934, but he still appeared in 21 games for the Crackers and in 11 games for the Tulsa Oilers. In the offseason his contract was acquired by the Buffalo Bisons of the International League. After years of moving from team to team, Jacobs finally found a stable situation; he pitched for the Bisons, primarily in relief, until 1939.

Needing relief help, the Cincinnati Reds traded for Jacobs on June 14, 1939. The Reds thought he was 34 years old, but he was actually two years older when he made his major-league debut on June 18 in Cincinnati. He pitched the ninth inning of the first game of a doubleheader and allowed one run in the Reds’ 12-6 victory over the Boston Bees. The game was played “through almost a continuous driving rain.”21

During pregame warm-ups two days later, Jacobs was shagging flies in the still-soaked outfield when he slipped and fell, “tearing ligaments in his left shoulder.”22 “Too bad for Jacobs,” said Reds manager Bill McKechnie. “He had a curve, a screwball and good control. He should have been more careful out there.”23 The Reds optioned Jacobs to the Indianapolis Indians, with whom he made one appearance in July,24 but he was otherwise sidelined for the remainder of the season. He would never make it back to the majors.

Jacobs pitched for Indianapolis and Buffalo in 1940. The next year, in his final season as a player, he appeared in six games for the Portland Beavers. He later umpired in the Sunset League, 1948-49, and Western International League, 1950-54.

For 30 years, Jacobs worked as a studio grip at motion picture studios in Hollywood. On June 8, 1967, at the age of 64, he died of a heart attack in Inglewood, California. His death certificate indicates that he was cremated.

This biography was reviewed by Bill Lamb and Norman Macht and fact-checked by Kevin Larkin.