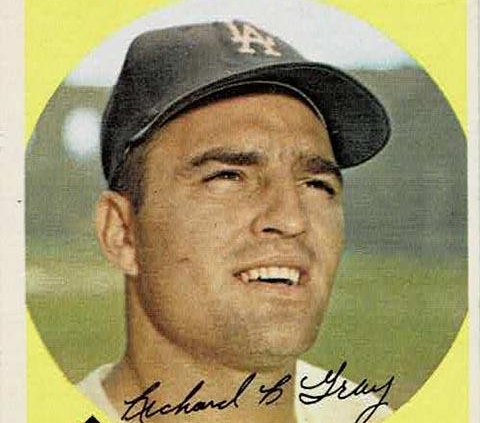 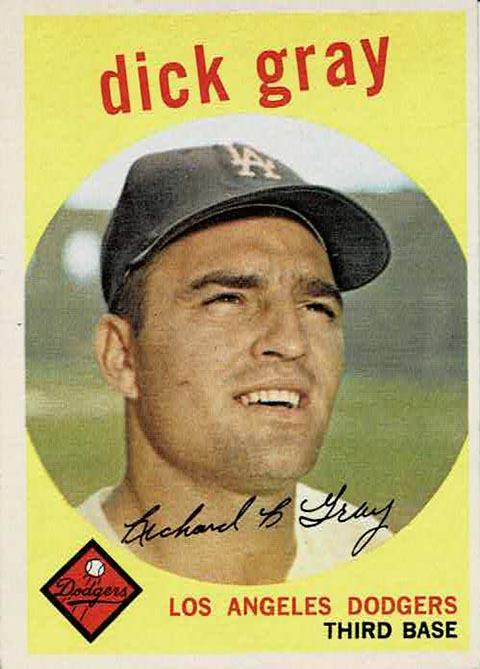 The highlights of Dick Gray’s big-league baseball career all came in its first week – the first home run in Los Angeles Dodgers’ history and, two days later, the first major league home run hit in Los Angeles. But the highlights faded, the momentum could not be maintained and Gray’s career ended shortly.

Richard Benjamin Gray was born July 11, 1931 in Jefferson, Pennsylvania, a burg about 50 miles southeast of Pittsburgh, where his parents and their families worked in the local coal mines.1 Kathryn Meeks Parker had married Charles David Gray when she was 16 years old and he 20, they told census takers in 1930. Dick’s older sister Irene was born months later and Kathryn was still 19 when Dick was born. The marriage was troubled and by 1940, Dick and Irene were living with their maternal grandparents on the outskirts of Jefferson. Both parents eventually would remarry.2

Gray was a natural athlete, participating in football, wrestling and baseball for Jefferson High School while also playing American Legion ball in the region. He graduated Washington High School in 1949 and briefly attended Waynesburg College, now Waynesburg University, about five miles down the South Fork of Tenmile Creek. In August of that year, Rex Bowen signed him for the Brooklyn Dodgers. He was 5’ 10” inches tall and just under 150 pounds, right-handed all the way.

In 1950, the Dodgers assigned him to the Class D Sheboygan Indians under manager Joe “Unser Choe” Hauser, the legendary minor league slugger.3 When the season opened he was batting third and playing second base.4 As would prove usual with Gray, he started the season hot, running up a 19-game hitting streak by early June and standing near the top of the Wisconsin State League statistical leader boards with a .366 batting average.5 He made the All-Star team, winning a pen-and-pencil set in the process.6 But his season settled down to a highly respectable batting average of .310 and a slugging average of .478. He also made five errors one day and was grateful when Hauser moved him to third base.7

For 1951, the Dodgers promoted Gray to Greenwood of the Class C Coastal League. He got off to a slow start and when his playing time became erratic, he requested a transfer.8 The Dodgers sent him to Valdosta of the Class D Georgia-Florida League, where he finished another solid year with a .302 batting average while slugging .438 and being named the league’s outstanding player.9 The next year he was promoted to Miami of the Class B Florida International League. He hit a modest .240 before being drafted into the Army.10

Gray spent the next two years at Fort Leonard Wood, Missouri, playing for the base team with Jerry Lumpe, Eddie Kasko and Whitey Herzog. Lumpe nicknamed him “Chief Pontiac.” Lumpe “thought my profile was a dead ringer for those … radiator ornaments the Pontiac cars used to have.”11 He also met and married Joanne Colvin near the end of his hitch and they would remain together for the rest of their lives, producing three daughters.12

Gray had added an inch in height and 15 pounds of muscle while playing in the Army and caught the eye of Dodger manager Walter Alston during an early camp for prospects in 1955.13 The result was an assignment two rungs up the ladder – the AA Fort Worth Cats. He put together an unspectacular year in 1955 but blossomed the following season with an OPS of .832 and a spot on the Texas League All-Star squad.14 His reward was a place on the Dodgers’ 40-man roster and a promotion to AAA St. Paul.15

Alston was impressed at spring training in 1957, and everyone noticed a hot start for the Saints, propelling Gray onto the American Association All-Star team.16 Beginning late that season, and continuing over the winter, Gray was consistently described as a leading contender for the Dodgers’ 1958 third base job.17

He spent the winter playing for the Cienfuegos Elefantes of the Cuban Winter League and reported to Vero Beach in 1958 for a multiplayer scrum at third base. Six men had patrolled third for the Dodgers in 1957, with the aging Pee Wee Reese logging the most playing time. For 1958, the Dodgers still hoped Randy Jackson, after a dismal 1957, would recover his 1956 form. He, Reese, Jim Gilliam and rookie Bobby Lillis were all touted as competition for Gray.

Gray had a fine spring, finishing second on the team in runs batted in and home runs and winning the job for major league baseball’s first official game on the West Coast on April 15, 1958. At San Francisco’s Seals Stadium, Gray managed two singles off the San Francisco Giants’ Ruben Gomez in an 8-0 loss. The next day, his home run, two more singles and three runs batted in led the Dodger offense to a 13-1 drubbing of the Giants. The second-inning homer was the Dodgers’ first on the West Coast.

Two days later, in the home opener at the Los Angeles Memorial Coliseum, Gray’s seventh-inning homer off Johnny Antonelli proved to be the margin in a 6-5 win over the Giants. It was the Dodgers’ first home homer on the West Coast. After eight games, Gray was hitting .379 with three homers and six runs batted in.

But other notes were creeping in. Alston, upset after four errors one day that week, singled out Gray. He “messed up a play that belonged to Reese,” Alston said. “I just hope he doesn’t do it again.”18 That less than ringing vote of confidence was amplified by minor injuries which kept him out of the lineup for several days in late April and early May.

There was also the lingering suspicion that Gray’s hot start had been overly aided by the short left-field fence at the Coliseum.19 For the first six games, balls flew out to left at a record pace, but the home run rate dropped as the year progressed.20 By mid-May, Gray had gone 7 for 60 after his opening week streak and was optioned back to St. Paul.21 General manager Buzzie Bavasi intimated the demotion would be short-lived while he worked out a deal to clear roster space. Gray was told to let Joanne stay in Los Angeles.22

He was recalled within two weeks, just in time to join the Dodgers in Pittsburgh, where a delegation from Washington, PA presented him with a set of luggage.23 True to pattern, Gray immediately embarked on another hot streak, hitting .400 with a home run over six games and pushing his overall average to .300. But, negatives also recurred. On June 17, he argued with umpire Frank Dascoli that a Phillies runner had missed the bag, allowing Solly Hemus to steal a base. By late July, the batting average was down to .249, the home runs were coming less frequently and errors occurred in consecutive games. Gray was demoted to St. Paul again.24

Three weeks later, as the Dodgers tried to buck up their top farm club for the International League pennant race, Gray was transferred to the Montreal Royals. Gray reacted angrily, refusing to report and going to visit his father in West Virginia.25 Within two days, he changed his mind and reported.26 His tribulations continued. While he did help Montreal to the pennant, he was hit in the forehead by a line drive early in the playoffs. The ball reportedly bounced ten feet way and the cut was two and a half inches. Gray was finished for the year.27 He spent the winter selling Chevrolets at a Los Angeles-area dealership and playing in charity exhibitions.28

The dismal 1958 campaign had not seen a clear third basemen appear from the Dodger roster. Gray, with 58, had appeared in more games there than any other, but six others had played the position as well. Of the six, Reese had retired. Jackson had been traded. Gilliam, Don Zimmer and Gil Hodges were deemed more valuable elsewhere. Rookie Earl Robinson was really an outfielder. And, after all, Gray had not played all that poorly. His 1958 OPS+ of 106 placed him above league average and without a strong rival. Thus, Gray was very much part of the off-season speculation over who would be the Dodgers’ third baseman in 1959.29

But, Gray had a poor spring and the opening day assignment went to Jim Baxes, a 30-year-old Pacific Coast League veteran and sentimental favorite of Los Angeles sportswriters. Baxes would not survive long. With the trade for Wally Moon and the emergence of Don Demeter, Gilliam was no longer needed in the outfield and he would play 131 games at third that season. Baxes played 10 and Gray 11.

Gray languished on the bench for the early months of the season, appearing in 21 games for only 59 plate appearances and a .154 batting average. On June 15, he was traded to the Cardinals for Chuck Essegian and Lloyd Merritt. Essegian would hit two major World Series home runs for the rebounding Dodgers as they defeated the Chicago White Sox.

In St. Louis, Gray received playing time as he had in Los Angeles – 36 games but an identical 59 plate appearance. The results were better, a .314 batting average and a 104 OPS+. Ken Boyer, however, was not likely to be dislodged from third base. Seeking a chance to impress, Gray spent the winter playing for the Havana Reds in the Cuban Winter League.30

Gray seemed to have a solid spot on the Cardinals’ bench as 1960 unfolded but on May 5, after only nine games and eight plate appearances, he was traded to the Pirates with Vinegar Bend Mizell in a deal that brought the Cardinals minor league second baseman Julian Javier. Mizell helped the Pirates to the 1960 World Series and Javier would be a fixture on the Cardinals’ excellent teams of the 1960s. The Pirates sent Gray to their Columbus farm club. The Cardinals were his last appearance in the majors.

Gray spent the 1960 through 1962 seasons at Columbus, putting up solid numbers but nothing that attracted the Pirates or any other major league club to bring him back to the big leagues.

“I think the only regret I have is I wasn’t more intense playing the game of baseball,” Gray said years later. “I never did realize it was a business until I got out of it. I was always kind of a nice guy, but what I should have done was just pay more attention and get a lot better, because I was a better ballplayer than what the stats show.”31

After the 1962 season, he retired to his home in Anaheim and took a job in the maintenance department of the Buena Park School District, where he worked for 34 years. In 1970, he briefly surfaced in the public eye for an Old-Timers’ game at Angel Stadium.32 He also appeared at baseball card shows and was inducted into the Washington-Greene County Sports Hall of Fame in 2009.33 He died on July 8, 2013, survived by Joanne, their three daughters – Catherine, Stacey and Nancy, four grandchildren and five great grandchildren.34 Joanne died January 14, 2014.35

This biography was reviewed by Donna Halper and Bruce Harris and fact-checked by Paul Proia.

In addition to the sources shown in the notes, the author used the following sources:

Census and other data from Ancestry.com

15 He had actually been added to the 40-man roster in October, 1955 but he was carried as an exception to the limit because he was returning from the Service. He was removed from that roster the following May. Roscoe McGowen, “New Labine, Says Dodger Brass of Draftee Walz,” The Sporting News, October 26, 1955: 11.