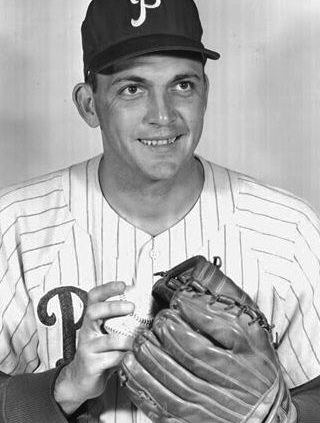 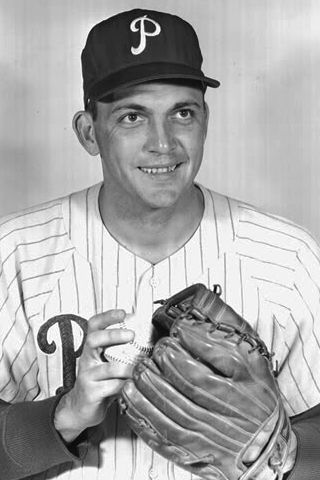 Right-hander Don Erickson pitched for 10 minor league seasons around two years of service in the U.S. Army. His major league career consisted of nine relief appearances for the Philadelphia Phillies in September 1958.

Donald Lee Erickson was born on December 13, 1931, in Springfield, Illinois, the last of Charles “Todd” and Mary (Jacaway) Erickson’s three sons. His brothers, Charles and Edward, were five and four years older, respectively. Their dad was a die maker for the Sangamo Electric Company, where Don’s grandfather also worked as a machinist. Don and his brothers learned to play baseball from their father. According to Don’s nephew, Roger Erickson, “[Todd] was offered a pro contract but opted to stay home.”1

At Lanphier High School, Don excelled in basketball, earning All-City honors as both a junior and senior and leading the city tournament in scoring both years.2 The 6-foot, 175-pounder once scored 52 points in a YMCA League game.3 The school declared the occasion of his last varsity game “Don Erickson Night”.4 Lanphier’s most famous alum is probably Hall of Fame pitcher Robin Roberts. After his 1948 rookie season with the Phillies, Roberts returned to Springfield and helped coach the Lions basketball squad. Aware of Erickson’s reputation as a pitcher, Roberts invited him to his parents’ home. “It was freezing cold with snow on the ground, so we went up into the attic and played catch in the available space, which was about 45 feet,” Roberts recalled. “I quickly noticed that he had a delivery very similar to mine, what they later called drop and drive.”5

Erickson described the most memorable game of his high school career as the time he pitched the Lions to victory and homered from both sides of the plate.6 Four-sport star Ron Little was Lanphier’s pitching ace, however, so Erickson primarily played second base.7 As a junior, he was an honorable mention second baseman on the state’s all-tournament team.8 When Erickson did pitch, his record was 20-4 for the Lions and other sandlot teams.9 Following his 1950 graduation, his mound work at a National Amateur tournament in Battle Creek, Michigan, captured the interest of major league scouts.10 But Erickson accepted a basketball scholarship to attend Western Illinois University.11 Before he played a single game of college hoops, however, Phillies scout Jimmy Keown signed him on November 13.12 Erickson had been recommended by Roberts, who’d just recorded the first of his six consecutive 20-win seasons for Philadelphia.13

Erickson debuted with the Lima (Ohio) Phillies in the Ohio-Indiana League. Clubs averaged more than six runs-per-game in that Class D circuit, but no pitcher allowed more earned runs (110), lost more games (14) or walked more batters (162) than Erickson in 1951. With the Korean War ongoing, he spent the next two years in the U.S. Army. While in the service, Erickson posted a 6-0 record for the Brooke Army Medical Center team at Fort Sam Houston in San Antonio, Texas. One of his teammates was Brooklyn Dodgers All-Star Don Newcombe.14

After he was discharged in early 1954, the Phillies sent him to the Class C Salt Lake City Bees. There, for the club with the Pioneer League’s best regular-season record, he went 13-12 with a 3.98 ERA while tying for the circuit’s lead with 28 starts and ranking second with 226 innings. He started 1955 with the Syracuse Chiefs in the Triple-A International League. After posting a 1-3 record in 11 appearances, however, he was demoted to the Schenectady (New York) Blue Jays of the Eastern League in early June. Other than brief Triple-A trials with the Miami Marlins (two games in 1956) and Louisville Colonels (five games in 1957), Erickson remained with Schenectady for three years.

On June 23, 1956, Erickson married Sharon L. Gannon at Springfield’s St. Agnes Catholic Church.15 According to city directories, she was an accountant for the Bell System, and he worked as a shipping clerk during off-seasons. Erickson later sold television sets during the winter.16 Don and Sharon had two children, daughters Neely and Erin.

In 1958, Erickson was assigned to the Double-A Tulsa (Oklahoma) Oilers three days before the Texas League season opened. He earned a relief win in the club’s second game and worked mainly out of the bullpen for the first time in his life. “When I first started relief pitching, I didn’t think I’d like it, but I do now,” he said later that summer.18 Oilers manager Al Widmar –and Jim Fanning, who succeeded him in July– liked Erickson in a relief role as well.19 The 26-year-old appeared in 72 games and saved 32, nearly half of the 71-81 club’s victories.20 “I can get ready in about 10 pitches, and that’s a big advantage for a relief pitcher,” Erickson explained.21

Erickson’s 155 innings pitched qualified him as the league’s official ERA leader with a 2.96 mark.22 Late in the year, he looked like a cinch to break the Texas League’s single-season record of 77 games pitched. With 10 games remaining in Tulsa’s season, however, the Phillies promoted him to the majors.23 “Coming to the Phillies this season was the biggest surprise of my baseball career,” he told a Philadelphia reporter. “I had no idea of it until I was told to join the club.”24

He debuted on September 1 at Forbes Field, hurling a scoreless bottom of the eighth in a 5-2 loss to the Pirates, allowing only an opposite-field single to Dick Groat. Springfield was well represented that day. In addition to Phillies’ teammates Erickson and Roberts, Pittsburgh had shortstop Dick Schofield on the bench, and the Flower City’s Al Barlick was one of the umpires. “Talk about a small world,” Erickson said. “Sports Illustrated even picked up on that and ran something on it.”25

Erickson worked in four games his first week. On September 7 against the Cincinnati Redlegs, he notched his first three strikeouts: Joe Nuxhall, Pete Whisenant and Ed Bailey. The Philadelphia Inquirer described Erickson as a slightly balding 26-year-old who acted like he couldn’t wait to get on the mound, instead of strolling in like most relief pitchers.26

When Roberts dueled fellow future Hall of Famer Don Drysdale on September 10, Erickson enjoyed the highlight of his big league career. In front of 5,106 fans, the smallest crowd up to that point of the season at Connie Mack Stadium, the Phillies led, 7-0, after three innings.27 Los Angeles pulled within 8-6 in the top of the ninth, however, when Erickson took over for Roberts with nobody out and the tying runners aboard. In short order, he retired Don Zimmer on a fly to center, then Jim Gilliam and Don Demeter on infield pop ups to save his fellow Lanphier alum’s 204th career victory.

Six nights later against the Cubs, Erickson earned his only major league decision. After entering a tie game to pitch the top of the 10th, he was charged with a loss after walking two batters and surrendering a two-out hit-and-run single to Chicago’s Alvin Dark.28 When Erickson caught Pittsburgh’s Bill Virdon looking at called third strike to complete a scoreless frame three nights later, he didn’t know it, but his big league career was over. In 11 2/3 innings over nine appearances, he struck out nine, walked nine, allowed three homers and pitched to a 4.63 ERA.

Erickson hoped to help the Phillies improve in 1959 after a last-place finish. But Philadelphia repeated as National League cellar dwellers while he spent the entire season with the Buffalo Bisons in the International League. In 40 games, he was 6-5 with a 3.53 ERA. In the first week of May 1960, the rights to Erickson, Don Landrum, Joe Lonnett and Harry Hanebrink were sold to the Bisons. Buffalo GM Don Labbruzzo called the deal “by far the largest amount ever paid by the Buffalo club in one transaction” and explained that the purchases were designed to stabilize his roster by ensuring that those players couldn’t be called up by the Phillies.29

Erickson didn’t remain in Buffalo, however. After posting a 7-9 record and 4.81 ERA in 32 games, he was demoted to the Chattanooga (Tennessee) Lookouts of the Double-A Southern League, where he went 1-4 with a 3.75 ERA in eight appearances. He returned to Chattanooga in 1961 and worked to a 2.21 ERA in 49 outings. The Lookouts finished with the league’s best record, but the league ceased operations at the end of the regular season without holding championship playoffs.

In 1962, Erickson finished his professional career with the Dallas-Fort Worth Rangers in the American Association. He made eight relief appearances, going 0-2 with a 9.00 ERA before he was released in May. His 10-year minor league career ended with a 75-83 record in 367 games.

After baseball, Erickson sold insurance for Franklin Life and worked for the Department of Insurance. He served as president of the American Business Club of Springfield in 1974-75 and remained a loyal Notre Dame and St. Louis Cardinals rooter. He was a member of the Elks and Knights of Columbus, a champion horseshoe pitcher, and sang in a group called the Easy E’s.

On August 1, 2012, Don Erickson died in Springfield at age 80. He was buried with military honors at Camp Butler National Cemetery.

This biography was reviewed by Eric Vickrey and Norman Macht and checked for accuracy by SABR’s fact-checking team..

In addition to the sources cited in the Notes, the author also consulted www.ancestry.com and www.baseball-reference.com.

27 The Phillies had four smaller home crowds in 1958, but they all came in the 10 days that followed.