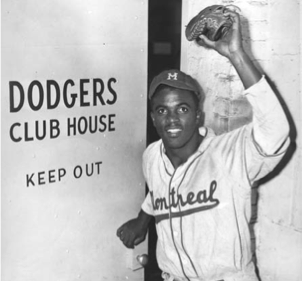 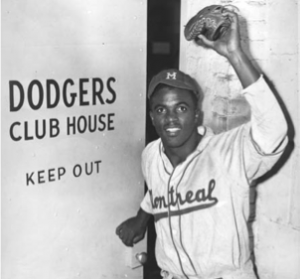 “I hadn’t even made up my mind Wednesday night. It came to me in the middle of the ball game yesterday just like that. … Robinson is coming to the Dodgers as just a ball player.” – Branch Rickey1

One baseball season and a spring as a Montreal Royal and Jackie Robinson was on the verge of becoming a Brooklyn Dodger. Robinson was ready for the big leagues. His performance on the field told part of the story. For the 1946 season, Robinson led the International League in batting average (.349), scored 113 runs, and stole 40 bases in 124 games.2 His fielding average (.985) led the league’s second basemen.

The Royals were dominant from the outset of the 1946 season. They opened on the road against the Jersey City Giants at Roosevelt Stadium. Robinson’s debut performance – four hits, four runs batted in, two stolen bases – led the Royals’ 14-1 rout. Joseph Sheehan, covering the game for the New York Times, noted, “Jackie Robinson converted his opportunity into a brilliant personal triumph.”3 The Royals won the league title with ease by 18½ games over the Syracuse Chiefs. A 100-54 record produced the most wins in the franchise’s International League history (1928-1960).

In the playoffs, the Royals beat the Newark Bears and the Chiefs before winning the Little World Series four games to two over the American Association’s Louisville Colonels, taking the last three games at Montreal’s Delorimier Park.4 The record Montreal crowd (19,171) was delirious with joy and the celebration was spontaneous after the series clincher. Robinson, who had sparked those three wins by going 6-for-14 at the plate, was mobbed by fans young and old, well after the game had ended. Sportswriter Sam Maltin wrote of the lesson of goodwill among men and the scene at hand, “the chasing of a Negro, not because of hate but because of love.”5 After the ugliness and bigotry that began with Robinson’s 1946 spring-training experience in Florida, the complete acceptance that he and Rachel Robinson received in Montréal was a welcome respite. Their feelings were captured in Robinson’s autobiography. “One sportswriter later commented, “For Jackie Robinson and the city of Montreal, it was love at first sight.” He was right.”6

As Opening Day 1947 fast approached, it was clear that spring training for both the Royals and Dodgers had been well orchestrated under the watchful eye of Rickey. He had a plan. He set up training camp in Havana and scheduled 13 exhibition games in Cuba and Panama between the Royals and Dodgers. Dodgers veterans would get used to having Robinson around and seeing him as an asset for a pennant drive.7 But there was rebellion. Some Dodgers did not want Robinson on the team and the ringleaders – Hugh Casey, Bobby Bragan, Dixie Walker, and Carl Furillo – circulated a petition to that effect. Rickey got wind of the petition and became even more determined to carry out his plan, encouraging any player to quit if he could not accept a black teammate. In his autobiography, Robinson suggests that “the petition protest collapsed before it got started.”8 Indeed, Rickey knew that Robinson was ready for the big leagues. Tested against Dodgers pitching, Robinson as a Royal hit .340 in those 13 games.9

The mound opponents on April 10 at Ebbets Field were the Royals’ Erv Palica and the Dodgers’ Ralph Branca. Palica had signed with the Dodgers in 1945 as an infielder but was converted to being a pitcher. He won 15 games for the Class-B Asheville Travelers in 1946, and the 19-year-old was promoted to the Royals for the 1947 season. Although Branca was used sparingly as a 20-year-old in 1946 (3-1 in 24 games), it was his first full season in the major leagues.

The biggest crowd to watch the Dodgers all spring (14,282) greeted Robinson warmly during batting practice and saw the Royals score all their runs in the fourth inning against Branca. Robinson walked, one of six walks Branca yielded in seven innings. After Spider Jorgensen flied out, Don Lund lined a home run into the left-field stands. When Earl Naylor walked and Al Campanis homered to left-center, the Royals led 4-0. Branca could be forgiven. Both home runs would have been caught in 1946, but the left-field wall was moved 14 feet closer to home plate for the 1947 season to accommodate more seating.10

The Dodgers got two runs back in the bottom of the fourth inning. Walker walked and scored on Duke Snider’s double to center. When Royals shortstop Lou Welaj threw a wild relay, Snider came around to score to cut the Royals’ lead in half, 4-2.

Just after Robinson popped into a double play attempting to bunt in the fifth inning, Arthur Mann, an assistant to Rickey, handed out a brief announcement in the press box: “The Brooklyn Dodgers today purchased the contract of Jackie Roosevelt Robinson from the Montreal Royals.”11 The words were few, but the significance would resound beyond the game itself.

Robinson actually learned of his promotion to the Dodgers that very morning when Rickey called him into his office to tell him the news. Despite flawless defense at first base, it wasn’t very surprising that he went hitless as well in his other at-bats against the Dodgers – a walk, a groundout to the pitcher, and a pop fly to the shortstop.12 He left Rickey’s office in a trance, modestly admitting later that he didn’t think he was too impressive in that last game with the Royals. “But that was because, I guess, I couldn’t keep my mind on the game all the time.”13

What should baseball fans remember about Robinson’s on-the-field performance on this day? Hy Turkin, reporting for the New York Daily News, reminded us of a facet of Robinson’s play in the decisive fourth-inning rally. It would become his hallmark. “His cat-like movements in a long lead off the bag drew two attempted pickoff throws and a pitchout in vain. Ralph Branca, still sneaking peeks at Robbie’s lead, grooved one for Don Lund and the Royal outfielder poled it into the left field stands.”15

As for Branca, he took a meaningless loss on this day, but the 1947 season was going to be his career year statistically – 21-12, 2.67 ERA, 280 innings and a league-leading 36 starts. He well understood and appreciated that a bigger story was unfolding on the field for the Brooklyn Dodgers, the presence and play of Jackie Robinson.16

In his 2011 book, A Moment In Time, Branca wrote of facing Jackie Robinson on this day for the first time in a big-league ballpark. As Branca made his way back to the dugout at the end of an inning, their paths crossed and Robinson said, “Thanks, Ralph.” Why? Robinson didn’t get a hit off Branca, only a walk. Cordiality easily described their relationship this spring. Robinson must have appreciated Branca’s refusal to sign a players petition in spring training suggesting that Robinson’s presence on the Dodgers would be disruptive. Branca didn’t know. “Whatever it was, from that day forward Jackie and I became close.”17

The following day would be a day long anticipated by both Rickey and Robinson. First, there would be the formality of Robinson signing a Brooklyn contract. Rickey was asked directly how the Dodgers players would react to their new teammate. “We are all agreed,” he said, “that Jackie is ready for the chance.”18 As for Robinson, “Just think, tomorrow I’ll be with them. I’ll be wearing a Brooklyn uniform.”19 Indeed on the very next day in another exhibition game, Robinson would be wearing that home white Dodgers uniform for the first time against an opponent to become all too familiar in Robinson’s major-league career, the New York Yankees.20

In addition to the sources cited in the Notes, the author accessed Baseball-Reference.com for statistical information.