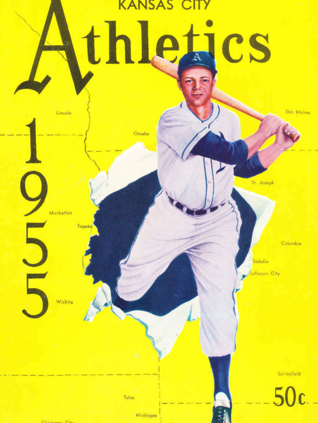 “Getting the American league franchise formerly held by Philadelphia was a glorious triumph for the Kansas City spirit. … [H]undreds of thousands of supporters are atingle for the opening of the big league era the A’s now bring.” — Kansas City Star, April 11, 19551 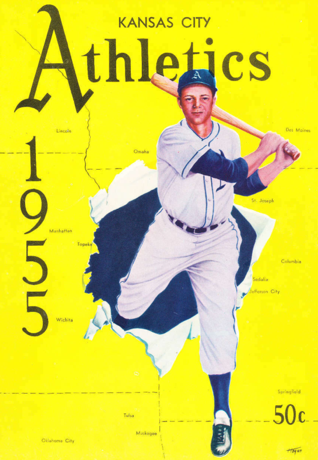 Philadelphia had been home to Connie Mack’s Athletics since 1901, but after the 1954 season he sold the club to businessman Arnold M. Johnson, who moved it to Kansas City. The 92-year-old Mack was on hand to see the debut of the Kansas City Athletics on Tuesday, April 12, 1955.

It was the first game at Kansas City’s gleaming new Municipal Stadium. Fans were as fascinated to see the ballpark as they were to see their new team. The attendance, reported to be 32,844 (of which 32,147 paid), set a record for the largest crowd to see a baseball game in Kansas City. Rain the night before and in the morning drenched the field but did not dampen the fans’ spirits. Nor were they discouraged by dire forecasts of the team’s performance. Sportswriter Joe Falls predicted that the Kansas City Athletics “will be the same sad-sack Philadelphia A’s who finished in last place in 1954.”2

“I don’t think the Kansas City fans will be expecting any miracles,” said Lou Boudreau, the A’s new manager. “On the contrary, I think they will be ready to encourage us to do our best with what we have, and that might make a greater improvement in this club than you imagine.”3 Athletics outfielder Bill Renna agreed: “I sense a new spirit and a new sense of organization already. I think we may do a lot better than is being predicted for us.”4

Connie Mack was given a standing ovation by the Kansas City crowd. Also cheered was Harry S. Truman, the 70-year-old former US president who resided in nearby Independence, Missouri; his left-handed throw of the ceremonial first pitch was right on target to Athletics catcher Joe Astroth. Also in attendance were baseball Commissioner Ford Frick and American League President Will Harridge, and David Bishop, a 73-year-old mechanic from Pottstown, Pennsylvania, who had not missed an Athletics season opener since 1902.

Boudreau chose Alex Kellner, a burly left-hander, as his starting pitcher. Right-hander Ned Garver started for the visiting Detroit Tigers, who were managed by Bucky Harris.

The Athletics were the first to score. With two outs in the second inning, Bill Wilson drove a Garver pitch to the fence in left-center field for a double. Moments later, he came home on Joe DeMaestri’s single to center field. The next inning Jim Finigan doubled to center field and scored on Gus Zernial’s Texas Leaguer that dropped into short right field.

The Tigers had a youthful lineup. Twenty-year-old Al Kaline led off the fourth inning with a single, but he was picked off by Kellner for the first out. The veteran Ray Boone drew a walk. Jay Porter, a 22-year-old Oklahoman playing in his first game as a Tiger, stroked a double to center field, sending Boone to third base. Bill Tuttle lifted a fly ball to deep right field where Renna made an outstanding catch, and Boone tagged up and scored. Mississippian Bubba Phillips, making his major-league debut, lined out to shortstop DeMaestri for the third out.

Detroit catcher Red Wilson led off the fifth inning with a mammoth home run to left field — it traveled an estimated 425 feet — and the score was tied, 2-2.

The A’s rallied in the sixth. Renna got it started with a double off the left-field fence. Bill Wilson walked, and both runners advanced on DeMaestri’s groundout. Garver walked Astroth intentionally to get to Kellner, but the move backfired. Elmer Valo pinch-hit for Kellner and drew a walk that forced in a run. Pinch-hitter Don Bollweg followed with a sharp single to right field, scoring Wilson and Astroth. Valo, trying to reach third, was thrown out by a strong peg from Kaline, the Tigers right fielder.

Boudreau sent right-hander Ewell Blackwell to the mound in the seventh. Blackwell was attempting a comeback after being out of action for 18 months with a “dead arm.”5 With one out, Red Wilson singled to right field and Ferris Fain, pinch-hitting for Garver, drew a walk. Up to the plate stepped 24-year-old Harvey Kuenn, who led the 1954 Tigers with a .306 batting average. Blackwell fed him a sinkerball, and he grounded into a 6-4-3 double play.

Making his major-league debut, Van Fletcher, a 30-year-old right-hander, took over the mound duties for Detroit. The “lanky Carolinian”6 retired the A’s in order in the seventh.

Blackwell got in trouble again in the eighth. With one out, he gave up a single to Kaline and issued a free pass to Boone. But the Kansas City defense helped him once more, as Porter grounded into a 5-4-3 double play.

Bill Wilson homered over the left-field fence in the bottom of the eighth. He thereby won a 21-inch TV from a local merchant for hitting the first Kansas City home run of the season.

With one out in the ninth, Blackwell walked Jim Delsing, who was pinch-hitting for Phillips. Second baseman Pete Suder caught a liner from the bat of Red Wilson and threw to first in time to double up Delsing. The final score was Athletics 6, Tigers 2.

The fans cheered wildly for their new team. The A’s “were the patsies of the league at Philadelphia,” wrote columnist Lyall Smith. “But the unbounded enthusiasm with which they are being greeted here in almost hysterical frenzy has given them a new lease on life.”7

Game coverage in the April 13, 1955, issues of the Kansas City Times and Detroit Free Press.