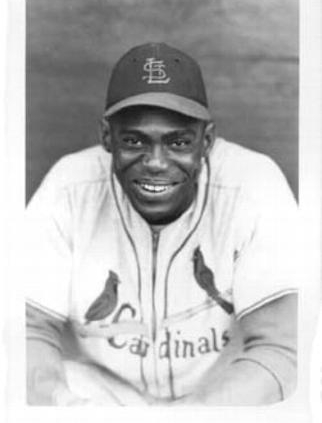 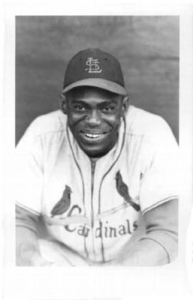 With the start of the 1954 season, beer magnate August A. Busch Jr. finally had the full attention of baseball fans in St. Louis. Having purchased the National League’s Cardinals as well as its ballpark in the past year, Busch no longer had to deal with the previous landlords of Sportsman’s Park – the Browns of the American League, who had moved on to Baltimore to become the Orioles.

As the schedule began on April 13 at home against the Chicago Cubs, Sportsman’s Park was awash in many ornamental changes implemented by the Busch regime. No new sight, however, was more historic than the Cardinals’ first baseman.

Acquired from the San Diego Padres of the Pacific Coast League in January for $100,000 and two Cardinals, Dick Sisler and Eddie Erautt, neither of whom played in another big-league game after 1953, Tom Alston arrived in St. Louis with the highest price tag ever for a player from that circuit.1 In 1953, Alston had batted .297 with 23 home runs in San Diego after a .353 stint in 1952 with Porterville of the Class C Southwest International League before the club folded from financial difficulties on August 1. (When that happened, Alston was picked up by the Padres.2)

While there were 13 other Black players in the Cardinals system during spring training in 1954,3 at the close of preseason workouts the 28-year-old Alston became the first to make the organization’s big-league roster. “Being the first Negro player on the Cardinals did not over-awe him,” wrote Frederick Lieb in The Sporting News from Al Lang Field in St. Petersburg, “nor did he embark on his career here with his first major league club with any timidity or self-consciousness. He wants to act natural. ‘They treat me here just the same as any other ball player,’ he said, ‘and that’s how I want to be treated. I’ve been told I have a chance here; I surely will give it everything I have.’”4

“Standing a lanky six feet five inches, Alston has springy legs,” St. Louis Post-Dispatch sports editor J. Roy Stockton noted on March 4. “He leaps into the air and snags line drives or high bounces that seemingly are hopelessly out of reach. Like most first basemen he enjoys doing his job one-handed whenever possible and has a fine glove hand.”5 Alston was a US Navy veteran and a graduate of North Carolina Agricultural and Technical College, where he earned a degree in physical education and social sciences.6

As the new season got started in St. Louis, the crowd of just over 17,000 at the ballpark was murmuring over the startling news coming out of the offices at Grand and Dodier. Just 48 hours before the opener, legendary Cardinals outfielder Enos Slaughter – whose tenure in St. Louis dated to the 1938 season and included two World Series championships – was dealt to the New York Yankees. Taking his spot was rookie Wally Moon, who grew up idolizing Slaughter in nearby Arkansas. “It’s an honor to replace a ballplayer like Slaughter,” Moon said in advance of his debut. “Yes, I was surprised – surprised he was traded and surprised I got the chance – but I am happy.7

In addition to mulling Slaughter’s sudden departure, spectators at Sportsman’s Park that afternoon were thinking of another star from the glory days of the 1940s. Like Moon, shortstop Alex Grammas was also making his debut with the Cardinals that day and was given the uniform number 4 – last worn by former MVP shortstop Marty Marion, whose final season as a Cardinal was 1950.

Starting the year on the mound for St. Louis was rising star Harvey Haddix, who in 1953, in his first full season in the majors, led the National League with six shutouts. The Cubs countered with lefty Paul Minner, who equaled Alston in height at 6-feet-5 and whose 4.21 ERA in 1953 was tops among the full-time starters on a beleaguered Chicago staff that posted a 4.79 team mark, seventh in the eight-team NL.

As Alston and his St. Louis teammates took the field, the Cubs were unveiling a promising Black player of their own. After a 10-game trial at the end of the 1953 season, during which he became the team’s first Black player on September 17, Ernie Banks was the Cubs’ starting shortstop, batting sixth in the Chicago lineup.8

Leading off for Chicago was Bob Talbot, as Haddix toed the slab. And Alston, more heralded by Cardinals scouts and coaches for his glovework to this point, had an inauspicious beginning with the very first batter of the year.

Talbot went after a high fastball from Haddix early in the count and lofted a pop foul between the first-base line and the stands. Alston camped under it with ample time to make the play, but the ball bounced off his mitt; he was charged with an error before scorecards had been marked with anything else. Talbot was unable to take advantage of the extra chance as he struck out, and no damage was done by the Cubs’ bats in the first.

After Rip Repulski was retired to begin the St. Louis half, Moon made his presence felt in the batter’s box, while the St. Louis faithful called for Slaughter with their yell, “We want Eno!”9 Moon became only the second Cardinal ever to hit a home run in his first time at bat in the majors,10 giving the Cards a 1-0 advantage with his blast to the roof atop the right-field pavilion.

As the afternoon progressed, however, “Moon and other St. Louis outfielders got more exercise yesterday than Washington University’s slick marching band,” wrote Bob Broeg in the Post-Dispatch.11 Banks scored the first Chicago run in the top of the second after drawing a walk; and after Alston (unable to match Moon’s first-appearance feat) popped to his counterpart Dee Fondy in the bottom half to conclude his first major-league at-bat, the Cubs built a 4-1 lead in the top of the third as Haddix was replaced by Hal White.

Alston struck out in his second try in the fifth inning, after which a six-hit, two-walk Cubs onslaught in the sixth, which also included an error by Stan Musial in left field, resulted in six more runs scoring off White and Cot Deal. The attack left little drama for the contest’s outcome, with Chicago upping its lead to 10-1. Minner himself joined the offensive fireworks by drilling a two-run homer in the ninth.

Musial provided a thrill for the home crowd in leading off the Cardinals’ final turn, launching the 258th homer of his career to the stands in right-center. Alston followed two batters later by grounding meekly to second baseman Gene Baker – who had followed Banks in becoming the second African American to play for the Cubs the previous September. Thus Alston’s first day in the majors was ended with an 0-for-4 mark, as the Cubs sent the dispirited St. Louis crowd home with a 13-4 trouncing of the Cardinals.

The hitting stars were Fondy, going 4-for-4 with two stolen bases; Chicago catcher Clyde McCullough also contributed four hits. Beyond the homers by Moon and Musial, the only excitement on the offensive side for the Cardinals came from Repulski and his 2-for-4 afternoon.

After three weather-beaten days in between, the Cubs and Cardinals met again on April 17 at Wrigley Field in Chicago, where Alston got his first major-league hit – a home run, which he followed with a pinch-hit homer the next afternoon that proved to be the difference in a 6-4 St. Louis victory, the team’s first of the season. But Alston’s average by June drifted down to .246 after a high of .333 on May 12 and he was dispatched to Rochester, the Cardinals’ Triple-A affiliate in the International League.

In the wake of his monumental introduction in St. Louis, Tom Alston appeared in only 25 more major-league games over the next three seasons. Nonetheless, he opened the door to a wave of Black players – with Curt Flood arriving in 1958 and Bob Gibson a season later – that would thrill Cardinals fans to this day.

In addition to the sources cited in the Notes, the author consulted Baseball-Reference.com, Retrosheet.org, and SABR.org for information, including the box scores.

8 Historians disagree on whether the Cardinals were tied for fifth – or by themselves in sixth – among NL teams to integrate. Some believe the Pittsburgh Pirates were the fifth, since Carlos Bernier (born in Juana Diaz, Puerto Rico) debuted for the Pirates on April 22, 1953. Others believe that Curt Roberts (born in Pineland, Texas) was the first Black player on the Pirates. He debuted with the team on April 13, 1954, on the same day that Alston played his first game with the Cardinals.