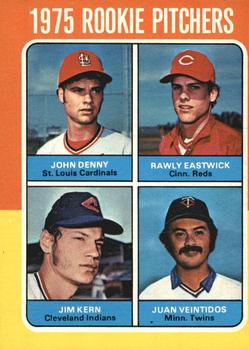 The four up-and-coming hurlers pictured on card #621 of the 1975 Topps set (1975 Rookie Pitchers) combined for 1,067 major-league appearances. Jim Kern pitched in 416 games, Rawly Eastwick in 326, John Denny in 325, and Juan Veintidos in zero. To collectors, Veintidos remains a mystery face, a “phantom,” one of that limited fraternity of players who achieved immortality through Topps’s colorful cardboard without ever seeing game action.

There is, of course, a backstory. Veintidos, a hard-throwing native of Puerto Rico, turned in a superb season in the Minnesota Twins’ minor-league system in 1974 — pitching well enough at the Double-A and Triple-A levels that pundits ticketed him for the big-league staff. He never quite got there, but his ’74 season is still one to remember. This is the story of its first game, when Veintidos began the unexpected journey that landed his mustachioed face in the shoeboxes, binders, and folders of baseball-card collectors everywhere.

Veintidos was only 24 when the 1974 season began, but he’d been knocking around the lower levels of the New York Mets’ system since 1967, with a year off in 1969 for military service. He pitched inconsistently as a starter and reliever, and the Mets finally cut him loose after the 1973 season, when he went a combined 2-8 with a 6.21 ERA between Class A and Double-A. Cal Ermer, manager of the Twins’ Triple-A farm team in Tacoma, Washington, saw Veintidos pitch in Puerto Rico that winter and talked Minnesota into giving him a shot.1 Veintidos began the 1974 season back in Double-A as the Opening Day starting pitcher for the Orlando (Florida) Twins of the Southern League.

Manager Dick Phillips’s Orlando club included eight players who appeared in the majors, and four of them landed in the starting lineup for the first game. Rob Wilfong led off and played second base, Bob Gorinski hit cleanup and played left field, Mike Poepping hit fifth and played right field, and Dave McKay hit sixth and played third base.2 Gorinski finished third in the league in hits that season, with 145. Poepping and Gorinski tied for the league lead in home runs with 23, while Gorinski led the circuit with 100 RBIs. The powerful pair shared a weakness at the plate, though: Gorinski’s 128 strikeouts led the league, while Poepping was fifth with 108.

The Twins faced off in their first game against the Asheville (North Carolina) Orioles,3 managed by future big-league manager and coach Cal Ripken Sr. Twelve players who appeared for that year’s Asheville team made the big leagues, and four of them faced off against Veintidos on Opening Day. They were right fielder Larry Harlow, hitting second; shortstop Kiko Garcia, hitting third; third baseman Taylor Duncan, hitting fifth; and second baseman Kim Andrew, hitting eighth.4 Hitting stars for the O’s that season included Harlow, second in the league in hits with 147; Duncan, tied for second in doubles with 25; and outfielder Jim Buckner,5 not in the Opening Day lineup, who tied for fourth in home runs with 17.

The start on the mound went to 22-year-old Baltimore native Myrl Smith, a lefty starting his fourth pro season after being chosen in the fourth round of the 1971 draft. Smith went 4-6 with a 3.22 ERA in 13 games for Asheville, all starts. Ripken, Smith, and company were aiming to reverse recent history: Orlando and Asheville met on the previous season’s Opening Day, with Orlando coming out on top, 2-0.6

Veintidos and Smith traded zeroes for 2½ innings, giving the scant crowd of 458 a tightly pitched game. The Twins pieced together the season’s first run in the third. Catcher and ninth-place hitter Jack Hasbrouck coaxed a walk to start the inning and moved to second on a single by Wilfong. Shortstop Dale Soderholm — brother of Eric Soderholm, third baseman for the parent Minnesota Twins — beat out an infield chopper to load the bases with none out. Smith got first baseman John Klitsner to ground into a double play, with Hasbrouck scoring to give Orlando a 1-0 lead.7

Similar circumstances resulted in Orlando’s second run one inning later. Poepping singled, McKay walked, and a wild pitch moved them both up a base. Designated hitter Jim Conn grounded into another double play, and Poepping crossed the plate to make it 2-0, Twins. After the game, Ripken explained his team’s choice to go for two outs instead of throwing home to retire the lead runner: “That’s the percentage play. I guess we’d do it again the same way. You know, if you don’t score any runs, you can’t expect to win. So what did it matter?”8

Ripken neatly summarized his team’s biggest challenge. Veintidos, the castoff, was virtually untouchable on the mound, mixing fastballs, curves, and an occasional slider with good location and movement.9 Asheville didn’t muster its first hit until the fifth inning, when first baseman Dennis Silvey singled, only to be erased on a double play. Andrew singled with two out in the eighth inning and advanced no further, and Garcia singled with two out in the ninth.10

Veintidos also yielded two walks, and first baseman Klitsner committed an error, but none of it added up to a threat significant enough to be mentioned in game stories. Veintidos went the distance, striking out eight and wrapping up a shutout in 1 hour and 53 minutes as Orlando claimed its second straight 2-0 Opening Day win over Asheville. Smith also went the distance and took a tough loss, scattering seven hits, walking four and striking out six. Twins minor-league director George Brophy, on hand to watch, joined others in raving about Veintidos: “He has a future if he keeps pitching like that.”11

The pitcher started four games for Orlando, going 2-1 with a 1.74 ERA, before receiving a promotion to Ermer’s Tacoma team in the Triple-A Pacific Coast League. He came into his own there, posting a 12-4 record, making the All-Star team, and winning the hitting-heavy league’s ERA title at 3.67.12 His 14 combined wins tied him for second-most of any pitcher in the Twins organization.13

In mid-September, one Minneapolis sports columnist reported that “Veintidos will be with the Twins next year,” quoting Ermer’s assessment that he had one of the best arms in the PCL.14 Another reporter gave Veintidos “an inside shot” at sticking with the 1975 Twins as a reliever.15 And on October 25, Veintidos was one of eight players moved onto the parent club’s roster, another hint of a bright future ahead.16

Available news stories do not explain why the Twins didn’t give Veintidos a chance at the majors in September 1974. They might have wanted him to work further on his consistency and control, weak spots even in his best season. Veintidos led the Pacific Coast League with 106 walks in 147 innings.17 His final start of the season, against Spokane on August 29, summed up his strengths and weaknesses. Veintidos pitched 10 innings of three-hit shutout ball and didn’t allow a hit after the fourth inning — but walked 11 batters. He escaped with a win on an RBI single by future Twins and Angels star Lyman Bostock. “He needs to keep the ball down, and I suspect he may need a slave-driver behind the plate,” Ermer told The Sporting News.18

Minnesota sent Veintidos back to Tacoma to open the 1975 season, and there he fell to earth. He backslid to a 5-11 record and 6.20 ERA in 28 games, walking 97 hitters against 82 strikeouts. Improved performance in 1976 — an 11-8 record and 3.81 ERA, also at Tacoma — drew a mention or two in Twin Cities newspapers.19 But no call-up materialized, perhaps because he walked 107 batters in 163 innings. He was even wilder in 10 ineffective appearances with Tacoma in 1977, logging 27 walks against 12 strikeouts. Released by the Twins during that season, he pitched in the Mexican League for the remainder of his career, which ended in 1980. By that time, his 1975 Topps cardmate Eastwick had won two World Series rings, Denny had won a National League ERA title, and Kern had pitched in three All-Star Games.20

Still, Veintidos came closer to reaching the majors than most players do. And a garish orange-and-yellow-bordered slab of cardboard will always be around as proof — evidence of a one-season run of success that began in Orlando, Florida, on April 17, 1974.

Image of 1975 Topps card #621 downloaded from the Trading Card Database.

2 The members of the Orlando team who reached the big leagues but did not play in this game were Tom Johnson, Steve Luebber, Tom Norton, and Greg Thayer. Not all of them would have been on the roster on Opening Day. Also, first baseman-outfielder Jack Maloof missed the big leagues as a player, but later coached for five seasons at the major-league level with the Padres, Marlins, and Royals. Maloof led the Southern League in walks in 1974, with 105.

3 The Asheville Citizen-Times newspaper sometimes referred to the team on first reference as the O’s, raising the question of whether that was the team’s actual name. A photo on page 22 of the June 26, 1974, edition shows two players in jerseys with the full name “Orioles,” so this story opts for the full version of the name. At least one other Orioles farm club of the period — the Charlotte Orioles/O’s, who succeeded Asheville as Baltimore’s affiliate in the Southern League in 1976 — also extensively used the abbreviated “O’s” as at least a semiofficial team name.

4 Other Asheville players that year who also appeared in the majors included future Hall of Famer Eddie Murray (two games), as well as Rich Dauer, Dave Skaggs, Mike Flanagan, John Flinn, Bob Galasso, Larry McCall, and Mike Willis. Not all of them would have been on the roster on Opening Day.

12 Honeywell. A few statistics by way of context: The league-wide batting average was .288, and the league ERA was 4.99. The Spokane Indians posted the league’s best team ERA at 4.44; Tacoma’s team ERA was 4.79; and the league-worst Sacramento Solons had a team ERA of 6.70 — playing in Hughes Stadium, a ballpark with a 232-foot left-field line.

14 Tom Briere, “Caray Goes to Bat for Twins [sic] Quilici,” Minneapolis Tribune, September 15, 1974: 14C. Ermer’s pick for the other best arm in the PCL was future big-leaguer John Montefusco, then pitching in Phoenix.

17 He walked a relatively modest 14 batters in 31 innings at Orlando.

20 Kern and Eastwick also won one Rolaids Relief Man of the Year award apiece — Eastwick in the National League in 1976, Kern in the American League three years later. Denny won the NL Cy Young Award in 1983 with the Phillies.