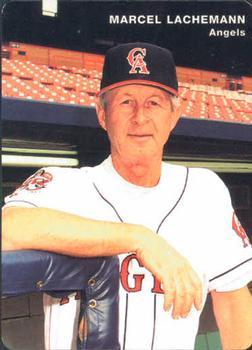 “This is a cursed team,” starting shortstop Gary DiSarcina said of the 1992 California Angels. His fatalism, in retrospect, is easy to understand. The team’s travails included the death from cancer of coach Deron Johnson, a life-threatening spring-training injury to pitcher Matt Keough,1 a May accident involving a team bus that seriously injured manager Buck Rodgers,2 and the death of interim manager John Wathan’s father in August.3 The Angels limped to a 72-90 record, tied for fifth place in the seven-team American League West Division.

When Wathan, the interim manager, took leave from the team for his father’s funeral, pitching coach Marcel Lachemann found himself in the unusual position of “interim interim manager,” leading the Angels for four games.4 The first of those games was a 1-0 walk-off extra-inning home triumph for California on August 11, perhaps proving that the Angels were not so cursed that they couldn’t catch a break once in a while.

The Angels entered the game in sixth place with a 50-63 record, 18½ games back in their division. They posted a 5-7 record against Milwaukee that season, but the numbers masked a sharp home-and-away differential: The Angels had a 5-1 record against the Brewers in Anaheim but lost all six of their games in Milwaukee. The Brewers had a 60-51 record under Phil Garner’s leadership, good for third place in the AL East.

The difference in the two teams’ records probably had much more to do with hitting performance than with jinxes or curses. For the full season, Milwaukee was second in the AL with a .268 team batting average, and placed above the league average in doubles, triples, and RBIs.5 By comparison, the Angels’ year-end average of .243 was the league’s worst (well short of the league average of .259). The Angels also had the fewest doubles and RBIs, and the AL’s worst on-base percentage and slugging percentage.

Garner and the Brewers relied on the stolen base as a major offensive weapon. The team entered the game with 161 stolen bases; by season’s end, Milwaukee led the AL with 256 thefts, well ahead of California’s 160. It was a foregone conclusion that the Brewers would test California catcher Ron Tingley. “They’re a very aggressive team, and they’ll send anybody,” Tingley said. “So there’s no time to relax behind the plate. You’ve got to be on your toes all the time.”6

The Angels gave the start to lefty Chuck Finley, a two-time All-Star in his seventh season of a 14-year tenure with the club. The struggling Finley entered the game with a 4-8 record and a 4.90 ERA, fourth highest in the league among qualifying pitchers. The game marked his first appearance of 1992 against the Brewers.

Opposing him for Milwaukee was fourth-year righty Jaime Navarro, whose 12-7 record put him on a path to a team-leading 17 wins in 1992. Navarro had started against California on June 6, pitching eight innings in a 4-3 Milwaukee win. Veteran umpire Derryl Cousins called balls and strikes. Umping at second base was Terry Cooney, only about a month away from the end of an 18-season, 2,255-game career.7 A crowd of 21,142 attended.

The Brewers turned immediately to the steal in the first inning. With two out, Paul Molitor singled, former Angel Dante Bichette walked, and both men advanced on a double steal. Kevin Seitzer’s fly to center ended the rally and stranded both runners.

California’s Luis Polonia—most frequently the Angels’ left fielder, but the DH on this night8—led the AL in stolen bases with 40 at the start of play. He led off the first by beating out an infield chopper up the middle9 and, one out later, tested Brewers catcher B.J. Surhoff with an attempted steal. Surhoff threw Polonia out at second, and Junior Felix struck out to end the inning.

The Brewers’ offense perked up again in the fourth, starting with another Molitor single. After Bichette’s strikeout, Finley picked Molitor off first; Molitor was tagged trying to advance to second, and the play was recorded as caught stealing. Seitzer drew a walk and was gunned down by Tingley trying to steal. Polonia led off the bottom half with another single, but the next two Angels flied out and grounded into a double play.

Milwaukee moved another runner to third in the fifth as John Jaha singled, stole second, and advanced on a groundout. Scott Fletcher’s two-out infield pop once again stranded the runner.

Navarro handed the Angels a rally in the bottom half by hitting Gary Gaetti and Rene Gonzales with pitches to start the inning. Von Hayes attempted a sacrifice bunt, but the Brewers threw to third to get the lead runner, and Tingley followed with a double-play grounder to keep the game scoreless. Gonzales was subsequently removed from the game to have his hand X-rayed. Gaetti moved from first base to replace Gonzales at third while Lee Stevens came in to play first.

Finley bowed but did not break in the top of the seventh, giving up singles to Bichette and Jaha. Greg Vaughn’s fly ball moved Jaha to third with two out. This time, Surhoff failed to pick up the run, grounding to second base to end the rally. The Brewers collected two more singles in the eighth but ran themselves out of the inning, as Tingley threw out both Fletcher and Listach trying to steal second. The inning’s other out was a called strikeout of future Hall of Famer Robin Yount, who went 0-for-4, leaving him 25 hits shy of 3,000.10

The Angels’ Rob Ducey was caught stealing for the third out of the eighth inning after singling. Both teams went in order in the ninth, and the game headed, scoreless, into extra innings. Each team had picked up six hits.

Righty reliever Joe Grahe replaced Finley for the 10th inning. Pinch-hitting for Jaha, Franklin Stubbs led off with a single to right field. Two outs later, Tingley threw out Stubbs trying to steal second. The run-happy Brewers had stolen three bases but had been caught five times, one short of the AL record.11 After the game, Garner defended his repeated calls for the steal: “That’s our game. If a home run hitter strikes out four times in a row, you don’t tell him to cut his swing down.”12

Navarro came back out for the 10th and retired leadoff hitter Gaetti on a grounder. Stevens doubled to third base, only the second time the Angels had moved a runner into scoring position. (The Los Angeles Times described his hit as “a roller off the end of the bat,” while another account said the ball “spun away from third baseman Seitzer and down the line.”)13

Navarro intentionally walked Hayes, his only free pass of the night, and gave way to righty reliever Mike Fetters. Fetters, playing his first season with Milwaukee after three with the Angels, entered the game with an 0.65 ERA.14 Lachemann summoned lefty-swinging veteran Ken Oberkfell to pinch-hit for Tingley. He singled to left field to load the bases.

Next came Ducey, not a tremendously patient hitter: In 80 big-league at-bats in 1992, he walked five times and struck out 22. But in this case, little patience was required, as Fetters threw him four straight balls. The bases-loaded walk handed California a 1-0 victory, and also provided Ducey with his first RBI of the season. Grahe got the win, bringing his record to 4-3, while Navarro took the loss, dropping to 12-8.

Perhaps the brightest news for the Angels the rest of the season was the return of Rodgers as manager on August 28. Rodgers remained California’s skipper until he was dismissed in mid-May 1994. Lachemann, his former “interim interim” replacement, took his place as full-time manager until resigning in August 1996. Under Lachemann’s leadership, the 1995 Angels coughed up an 11-game division lead and lost to the Seattle Mariners in a one-game playoff—further fodder for those who believed the Angels franchise operated under a black cloud rather than a halo.15

This story was fact-checked by Ray Danner and copy-edited by Len Levin.

In addition to the specific sources cited in the Notes, the author used the Baseball-Reference.com and Retrosheet.org websites for general player, team and season data and the box scores for this game. He also drew information from Marcel Lachemann’s biography in the Angels’ 1995 media guide.

1 Keough, attempting a comeback with California after several seasons in Japan, was struck in the head by a foul ball lined into the Angels’ dugout. He underwent brain surgery and recovered from the incident, but did not pitch again. Associated Press, “Halos Glad to Survive Hard Year,” Santa Clarita (California) Signal, October 6, 1992: C4.

2 In the early hours of May 21, one of the Angels’ buses left the New Jersey Turnpike and struck a tree while the team was en route from New York to Baltimore. Rodgers suffered a broken rib, elbow, and knee; several players suffered less severe injuries. Associated Press, “Empty Seat Reminds Angels of Bus Crash,” Spokane (Washington) Spokesman-Review, Augst 25, 1992: C2.

3 Helene Elliott, “Wathan’s Father Dies in Iowa at 80 After Brain Hemorrhage,” Los Angeles Times, August 12, 1992: C6. The Angels franchise has sometimes been labeled “cursed” by baseball pundits, given the team’s on-field struggles and the untimely deaths and severe injuries suffered by some of its players over the decades. DiSarcina’s comment, however, appears in context to specifically refer to the 1992 team. For background on the so-called “Angels hex,” see Stephen Roney, “Of Witches, Hexes and Plain Bad Luck: The Reputed Curse of the Los Angeles Angels of Anaheim,” The National Pastime: Endless Seasons: Baseball in Southern California (Society for American Baseball Research, 2011), accessed online April 11, 2022.

4 The four games managed by Lachemann are not credited to him on Baseball-Reference; they are part of Wathan’s record as interim manager. However, contemporary news stories make clear that Lachemann was given the reins in Wathan’s absence. Retrosheet’s summary of the 1992 Angels season also breaks out the four games and credits them to Lachemann.

5 One offensive area in which the Brewers underperformed was home runs. The team hit just 82, second fewest in the AL. (Kansas City hit 75.) For comparison’s sake, the league average in 1992 was 127 team homers, and California hit 88.

8 Fifteen different Angels, including pitcher Mark Langston, appeared as designated hitter during the 1992 season. Hubie Brooks made the most appearances there, with 70; Polonia was second with 47. Polonia also played 99 games in left field.

14 The Angels traded Fetters and minor leaguer Glenn Carter to the Brewers in exchange for pitcher Chuck Crim on December 10, 1991.