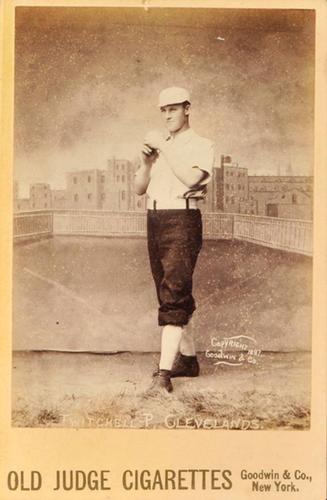 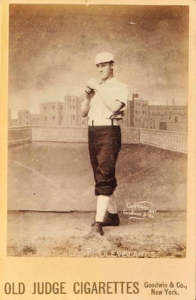 What one newspaper called the “greatest batting exhibition of the year”1 took place at Cleveland’s League Park on August 15, 1889, in a National League game between the Cleveland Spiders and Boston Beaneaters. The crowd of 1,500 saw Cleveland bash 27 hits, for a total of 48 bases, blasting Boston, 19-8.2 Further, the Spiders – after electing, in accordance with baseball’s rules of 1889, to bat first in the first inning – “broke the record by scoring in all nine innings, something rarely done in the game of baseball.”3

Cleveland also received eight bases on balls and a hit batsman, prompting the Boston Globe to report, “[A] grand total of 36 men got a start around the bases, 19 of whom scored.”4 The Spiders’ man of the hour was Larry Twitchell, who began and ended the day in left field, pitched an inning along the way, and “netted five runs, one base hit, one two-base hit, three three-base hits and a home run” in six times at bat,5 good for the first-ever cycle in Cleveland’s major-league history.6

The 25-year-old Twitchell, a Cleveland native, had spent the previous three seasons with the NL’s Detroit Wolverines, but was sold to Cleveland in December 1888 when the Wolverines disbanded and the American Association’s Cleveland Blues joined the NL. The Blues rebranded as the Spiders in 1889, and Twitchell was their everyday left fielder.

When Cleveland hosted Boston on August 15 to open a three-game series, the Spiders were fourth in the eight-team NL, 9½ games behind the first-place New York Giants. Briefly in first themselves in early July, Cleveland had fallen back with 21 losses in its last 25 games.

The Boston club arrived by train at 2:00 P.M. from Pittsburgh, more than an hour later than expected. The team, which had been on the road for 11 days, “hurried to the ballpark, where a little practice was indulged in.”7 Boston had lost six of those 11 games, dropping to second place, a half-game behind the defending champion Giants.

Old Hoss Radbourn had been scheduled to start for the Beaneaters, but the redoubtable 34-year-old right-hander complained of sickness after the train ride. John Clarkson was the Beaneaters’ ace but had pitched the day before against the Alleghenys and was not available.

Manager Jim Hart instead gave mound duties to Kid Madden, a left-hander in his third big-league season. Described in his SABR biography as a “one-year wonder,”8 Madden had won 21 games in his rookie campaign of 1887, then just 33 over the next four seasons. In 1889 he started 19 games and posted a 4.40 earned-run average, slightly worse than league average, while splitting 20 decisions.

Ed Beatin and Cinders O’Brien and were the stars of the Spiders pitching staff, but Cleveland skipper Tom Loftus started Jersey Bakley, a 25-year-old righty who spent six major-league seasons with nine different teams and four different leagues in his career.9 In 1884 he played for three teams in the Union Association, losing a combined 30 games and leading the league with 56 wild pitches. After a few seasons in the minors, Bakley resurfaced in the American Association with Cleveland in 1888, where he won a team-best 25 games. He stayed with the club when it moved to the NL in 1889.

Cleveland’s scoring spree and Twitchell’s big day began modestly. Madden struck out Paul Radford to start the game, then walked Cub Stricker, who stole second base. After Ed McKean struck out, Twitchell singled to center, and Stricker scored for a 1-0 lead. Patsy Tebeau also singled before Jimmy McAleer grounded out to end the inning.

The Beaneaters were retired in order, bringing the Spiders back into the batters’ boxes. Bob Gilks led off the second with a walk but was erased by trying to steal second. Chief Zimmer hit a ball off Madden’s glove for a single, and third baseman Billy Nash’s error on Bakley’s grounder put runners at the corners.

Radford grounded to shortstop Pop Smith, who threw home for the tag on Zimmer. Stricker’s walk, however, loaded the bases, and Joe Quinn fumbled McKean’s grounder to second. Bakley scored easily, but Radford, trying for an additional run, was tagged out by catcher King Kelly. In two innings, eight Spiders had reached base on hits, walks, or errors, but baserunning mistakes held their lead at 2-0.

Boston soon capitalized on its reprieve, as Bakley was, according to the Cincinnati Enquirer, “wild as a deer” in the second.10 According to the Cleveland Plain Dealer, Bakley “could not govern the sphere,”11 and before he could record an out, he had walked four batters and hit another (Charlie Ganzel), forcing in two runs, in a bout of wildness that the Boston Globe exaggerated as “br[eaking] one more record by giving five men their base on balls and hitting the sixth.”12

Suddenly Bakley “gave up in disgust”13 and walked out to right field. Radford moved from right to left, and Twitchell took the mound for what turned out to be his only pitching appearance of the season.

Twitchell began by walking Madden, forcing in the third run of the inning.14 A fourth Boston run scored when Hardy Richardson’s fly to right was muffed, and the bases were still loaded with none out. Kelly grounded to shortstop McKean, who threw home for a force out. Twitchell then turned Nash’s comebacker into a 1-2-3 double play, but Boston had batted around and taken a 4-2 lead.

Still, Cleveland’s firepower soon overwhelmed the Beaneaters. By the top of the third, it had become evident that Madden’s pitches had little speed. The Globe claimed that his offerings “had tags attached, which read: ‘Hit me’ or ‘Let me go by.’” Cleveland scored three more times for a 5-4 lead, as eight Spiders came to the plate and Twitchell tripled for his second hit of the game.15

Henry Gruber became the third Cleveland hurler in the bottom of the third. Three more walks loaded the bases, but two groundballs ended the inning with the Spiders’ one-run edge intact.

The Spiders increased their lead with more extra-base hitting in the fourth, Stricker singled and advanced to second on a fielder’s choice. Twitchell “smashed one up against the left-field fence”16 for an RBI triple, his third hit of the day. When he scored on Tebeau’s double, the Spiders’ advantage was 7-4.

In the bottom of the fourth, Kelly manufactured a run. First, he hit a one-out single. Then he took off for second on a wild pitch and continued to third, sliding in safely. 17 Finally, Nash struck out, but Zimmer, the Cleveland catcher, didn’t catch it cleanly. Zimmer threw to first to complete the strikeout as Kelly raced home with the run, cutting the deficit to 7-5.

The teams traded runs in the fifth. Gruber was hit by a Madden pitch and scored on Radford’s line drive to center. Radford tried to stretch his triple into a home run but was tagged out at the plate by Kelly. Boston loaded the bases with scratch hits after two outs, and Kelly brought in the run by getting a base on balls.

Cleveland broke the game open in the sixth. Twitchell led off with a double, and singles by Tebeau, McAleer, Zimmer, and Radford, followed by a Stricker home run “slammed”18 past Richardson in left, resulted in six runs. The Beaneaters managed only one run in response and now trailed, 14-7.

Twitchell kept up his bombardment of Madden in the seventh by sending a pitch “far over [center fielder Dick Johnston’s] head, making a home run before the ball was returned from the outfield.”19 He had completed hitting for the cycle. An inning later, McKean singled with one out, Twitchell walked, and Tebeau became the third Spider to homer, giving Cleveland an 18-7 lead.

Each team scored a run in the ninth. Twitchell’s third triple of the game followed Radford’s leadoff double in the top half, giving Cleveland its 19th run. Boston scored when Smith crossed home before Cleveland completed a game-ending double play, capping the Spiders’ 19-8 win in 2½ hours.

In a day of slugging, including a five-hit game by Tebeau and Radford’s four hits, Twitchell topped Cleveland’s hit parade with a perfect 6-for-6, with a walk and 16 total bases.20 He also recorded three key outs on the mound, escaping a bases-loaded jam while the game was still close. Twitchell became the third batter to hit for the cycle in 1889, following Louisville’s Pete Browning (June 7, against the Philadelphia Athletics)21 and Indianapolis’s Jack Glasscock (August 8, against the Giants).

Boston struck back with a 13-0 win a day later and closed out the series with a 2-1 victory on August 17. After its offensive explosion, Cleveland managed only one run in its next 18 innings against Clarkson and Radbourn and was winless in eight games from August 16 to 23. The Spiders slid to a sixth-place finish; the Beaneaters wound up one game behind the Giants in the final NL standings.

2 The Cincinnati Enquirer reported that the Spiders made 27 hits, while the Boston Globe credited the Spiders only with 26. However, the Globe agrees with the Enquirer that Boston pitchers yielded eight walks and hit one batter, and both newspapers state that 36 Cleveland batters reached at least first base. This lends credibility to 27 base hits by the Spiders.

14 According to both Retrosheet and Baseball-Reference, Twitchell appeared in one game, pitched one complete inning and issued one walk. Baseball-Reference shows that Twitchell faced four batters. The play-by-play in the Boston Globe gives no mention of a walk by Twitchell; instead, it leads the reader to believe that Bakley issued five walks and Twitchell’s first batter faced was Richardson. I have followed Baseball-Reference and Retrosheet, taking one walk away from Bakley and making Twitchell responsible for it.

15 The play-by-play accounts in the newspapers have no discussion of the top of the third inning. Twitchell led off the inning and hit one of his three triples. Cleveland sent eight batters to face Madden.

21 This was the second time in his career that Browning had hit for the cycle. His first cycle came three seasons earlier, on August 8, 1886, against the New York Metropolitans.