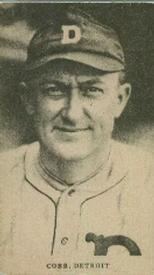 Hall of Famer Ty Cobb said, “Baseball is a red-blooded sport for red-blooded men. It’s no pink tea, and mollycoddles had better stay out. It’s a struggle for supremacy, a survival of the fittest.”1 Observers could see that he meant it by the way he played. One fan of Cobb’s opined, “Few names have left a firmer imprint upon the stages of the history of American times than that of Ty Cobb. This great athlete seems to have understood from early in his professional career that the competition of baseball, just as in war, defensive strategy never has produced ultimate victory.” The fan who said this was General Douglas MacArthur.2

Cobb was a controversial figure, but his skill on the diamond was unmatched. SABR biographer Daniel Ginsburg wrote, “Adopting an aggressive, take-no-prisoners style of play which mirrored his fiery temperament and abrasive personality, Cobb dominated the game in the batter’s box and on the base paths.”3 Many of his contemporaries believed he was the best to ever play the game. One of those contemporaries, a fellow member of both the Hall of Fame and the 3,000-Hit Club, Tris Speaker, argued, “The Babe was a great ballplayer, sure, but [Ty] Cobb was even greater. Babe [Ruth could knock your brains out, but [Ty] Cobb would drive you crazy.”4 Bill James ranks him as the fifth-best player ever.5

Just a little over five years later, on August 19, 1921, Cobb—at age 34 in his first season as Detroit’s player-manager—was on the verge of his 3,000th hit, as the Tigers hosted the Boston Red Sox in a doubleheader.

A day earlier, Boston had swept a twin bill from Detroit. Although Cobb’s Tigers had won the American League pennant three consecutive times from 1907 to 1909, they had finished seventh in two of the three seasons preceding 1921. Detroit was in sixth place with a 52-63 record. Boston was fifth at 52-57.

Cobb had five hits in the August 18 doubleheader. Sources vary on where this put his career total. The record book in use in 1921 set it at 2,997 hits; later references gave him 2,995.

Whatever the number, game coverage focused solely on Cobb’s performance in the doubleheader. If anyone was counting down to the imminent milestone, it was not mentioned in the day’s newspaper.

“Manager Cobb, as might be expected, had the best success with the Red Sox pitchers,” the Detroit Free Press observed, as Cobb competed for an AL batting crown that teammate Harry Heilmann ultimately won. “In nine trips to the plate, [Cobb] collected five safeties.”9

In the first game of the August 19 doubleheader, Cobb moved even closer to 3,000 by collecting a single and a double during the Tigers’ 12-8 loss to the Red Sox.

For the second game, the Red Sox started seven-year-veteran righty Elmer Myers, who had an 8-10 record. Myers, once such a promising phenom that Connie Mack thought he would make history, had had his career derailed by the effects of a poison gas attack in France during World War I.10

The Tigers countered with rookie left-hander Bert Cole, who had mostly been used in relief before this game. He had picked up a win in long relief, giving him a 1-0 record going into the start.

Both hurlers pitched well for the first five innings. Myers allowed the Tigers a run in the first but put up zeros the next four frames. Cole was even better, holding the Red Sox scoreless through five innings.

Myers said the gas attack caused him to tire as games progressed, and that seemed to be the case in this game. The Red Sox hurler retired Lu Blue to start the sixth, but shortstop Joe Sargent began a parade of Tiger hits with a double.11

The rain of hits resulted in five Tigers runs and left men on second and third. Myers walked eventual Hall of Famer Heilmann, who pounded career highs in hits (237) and RBIs (139) that season, and batted .394 to edge Cobb (who batted .389) for the AL batting title, loading the bases for Blue’s second at-bat of the inning.

Blue smashed a line drive toward left field, but shortstop Everett Scott snared the ball with a tremendous leap. Scott threw to third to double up Cobb and end the onslaught, but the Tigers led 6-0.

Cole kept his shutout intact in the top of the seventh and helped his own cause with an RBI single in the bottom half to increase the lead to 7-0.

Myers had more trouble in the eighth. After Jones’s triple, Cobb doubled to drive in another run. Veach earned a base on balls to put two Tigers on base, and a double by Blue drove both men in to make it 10-0.

Cole put up two more zeros in the eighth and ninth to finish his shutout. He moved into the starting rotation for the remainder of the season and finished the campaign with seven wins against four losses.

The game stories in the Boston Globe and Detroit Free Press describe two hits by Cobb, a single in the sixth and a double in the eighth. The box score indicates that Cobb had three hits in the game for four total bases, which means he singled in one of his three at-bats prior to the single in the sixth.

With his three-hit game and five-hit doubleheader, Cobb had joined the 3,000 Hit Club. But the question remained: Which hit was Number 3,000?

By the record book used during Cobb’s career and lifetime, he retired at 4,191 hits—a figure highlighted six decades later when Pete Rose overtook him as the major leagues’ all-time hit leader in 1985.12

Under that accounting, which the National Baseball Hall of Fame follows as of 2022, Cobb entered the second game of the doubleheader with 2,999 career hits, making his first single of the game his 3,000th hit.13

Another assessment of Cobb’s record, however, holds that the commonly accepted count mistakenly added two hits from the 1910 season and recalculates his hit total at 4,189. This total, stemming from research conducted by SABR member Pete Palmer in 1982, is standard in twenty-first-century reference sources like Baseball-Reference.com and Retrosheet.org.14

In this view, Cobb had 2,997 hits at the beginning of the game, and his third hit—the eighth-inning RBI double—gave him the milestone.

As in the pregame coverage, Cobb’s milestone went unacknowledged after it happened. While previous instances of players achieving their 3,000th hits—such as Wagner in 1914 and Lajoie later that season—received public attention at the ballpark and in newspaper accounts, there is no record of Cobb’s 3,000th hit being celebrated at the time.

The Sporting News did not mention anything about Cobb reaching 3,000 hits in its coverage of the game.16 The Detroit Free Press, noting that Cobb had five hits in 10 at-bats during the doubleheader, asserted, “Cobb hit like a fiend all afternoon,” but did not mention his milestone.17 Similarly, the Boston Globe emphasized that “Cobb bunched his batting average during the afternoon.”18

As it happened, the exact circumstances of Cobb’s 3,000th hit went unrecognized until 1958, when Stan Musial neared the 3,000-hit milestone and the Detroit News “was prompted to seek the occasion and date of Cobb’s 3,000th hit for comparative purposes,” which revealed “there was no notice taken whatsoever of the occasion.”19 A “lengthy searching of the files” was required to find when Cobb’s milestone hit happened.20

Cobb became baseball’s first member of the 4,000 Hit Club in 1927, his first of two seasons with the Philadelphia Athletics at the end of his career. Ironically, that hit came against his former team, the Detroit Tigers. Unlike Cobb’s 3,000th hit, newspaper headlines heralded his 4,000th hit.21

For 1928 Cobb was joined in Philadelphia by the next two players to reach 3,000 hits: Eddie Collins and Speaker, both of whom had attained the milestone in 1925. The team won 98 games and finished in second place, 2½ games behind the New York Yankees, who won their third consecutive AL pennant.

Many thanks to John Fredland and Bill Nowlin for their suggestions concerning the first draft of this article. The article was fact-checked by Kevin Larkin and copy-edited by Len Levin.

In addition to the sources cited in the Notes, I used the Baseball-Reference.com for team, season, and player pages and logs and the box scores and play-by-plays for this game.

2 Reddit, “By Request: Compilation of Quotes and Stories About Ty Cobb.”

4 Reddit, “By Request: Compilation of Quotes and Stories About Ty Cobb.”

14 Herm Krabbenhoft, “How Many Hits Did Ty Cobb Make in His Major League Career? What Is His Lifetime Batting Average?” Baseball Research Journal, Volume 48, Number 1, Spring 2019: 92-97.