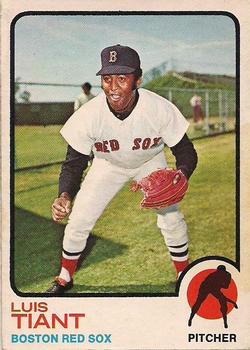 When the Boston Red Sox and Chicago White Sox faced off on this August Saturday afternoon, both teams could claim to be in divisional races. The Red Sox were just 56-55 and in fourth place in the AL East, but this was enough to leave them 3½ games behind the first-place Tigers in a tight, if decidedly mediocre, division. The White Sox were 66-46, winners of four straight, and just a half-game behind the Oakland A’s in the AL West. Today’s contest was the second game of an important series; Chicago had won the opener, 8-1, on Friday night. The afternoon game was on national TV, with Curt Gowdy and Sandy Koufax doing the call for NBC.1

Luis Tiant, the Red Sox starter, had served as a long reliever and spot starter throughout the 1972 season, his first full campaign in Boston. He had starred for the Indians for several years, especially in 1968, when he finished 21-9 with a league-leading 1.60 ERA. After a 20-loss season in 1969 and his trade to the Minnesota Twins, Tiant suffered a terrible injury to his shoulder in 1970. By 1971 he bounced from the Twins to the Atlanta Braves to the Red Sox, and even back in the minor leagues. Now 31, Tiant had surprised many observers when he made the Red Sox Opening Day roster in 1972, but he had served manager Eddie Kasko quite well in a utility role – 24 relief appearances, 8 starts – posting a 6-4 record with three saves and a 2.95 ERA.

Just one week earlier, on August 12, Tiant had taken a no-hitter into the seventh inning against Baltimore before settling for a complete-game three-hitter in Boston’s 5-3 win. Four days later he pitched in relief. Now he was getting another start. The Red Sox had played six doubleheaders in the previous month, heightening the value of Tiant’s flexibility.

The White Sox had become a big story that summer, especially over the past month, unexpectedly surging into their first pennant race since 1967. Their two best players were starting pitcher Wilbur Wood (21-11, 2.35 with six weeks still to play), and first baseman Dick Allen, in his first year with the White Sox after an offseason trade with the Los Angeles Dodgers. Allen had taken the American League by storm, leading the league in home runs (29), RBIs (85), batting average (.317, tied with Amos Otis), walks, on-base percentage, and slugging percentage. Wood’s turn in the rotation was on Sunday, but Allen was in the lineup on Saturday, hitting third.

The Red Sox did not take long to flip the script. Tommy Harper led off the game with a long home run into the upper deck in left field. The Red Sox added two runs in the fourth, beginning with a Rico Petrocelli fly ball that dropped for a two-base error when center fielder Jay Johnstone lost it in the sun and ending with Tiant’s RBI single to left field. The Red Sox led 3-0.

That was more than enough for Tiant, who dazzled the White Sox with the pitching deliveries that he would make famous in the 1975 World Series. In the next day’s paper, Peter Gammons referred to him as “the reincarnation of a former Cleveland pitcher named Luis Tiant … with his head bobbing, leg spastically kicking and arm flailing. …” He so entertained the crowd, wrote Gammons, that they “didn’t know whether to root for him or against him.”2

Tiant did not allow a ball to reach the outfield until the sixth, and for the second straight start took a no-hitter into the seventh. With two outs in that inning, Carlos May came to the plate. After getting two strikes with fastballs, Tiant decided to mix it up. “I struck him out [in the second] on a bad pitch high and away,” he said. “So I tried again to throw all knuckleballs.”3 After two pitches missed the plate, May went the other way, hitting the 2-and-2 pitch down the left-field line for a double.

“No doubt about it,” said Carlton Fisk, the Red Sox rookie catcher. “There was no chance of that ball going foul.” Already the team’s best player and a vocal leader, Fisk had wanted a different pitch. “I called for the fast ball, but Luis wanted another knuckler. When a man is throwing like that, I’ll let him throw what he wants.”4

Tiant struck out Ed Spiezio to strand May, and after that gave up only a harmless pinch-hit single by Tony Muser in the ninth. He finished with a two-hitter, walking just one and striking out nine. The great Allen, who had not faced Tiant since they were both in Eastern League in 1962, was 0-for-4 with two strikeouts, including one to end the game. “There was no reason not to hit him,” said Allen, “but you have to give him credit for making good pitches when he had to.”5

Oakland lost, so the White Sox remained a half-game back, with a doubleheader coming up on Sunday. “Bradley pitched an outstanding game,” said White Sox manager Chuck Tanner. “But Tiant just simply threw everything at us. You can’t pitch any better than he did.” Second baseman Mike Andrews, 0-for-4 with two strikeouts, could only agree: “I’ve never seen him better,” he said. “He’s thrown harder, but never with better control.”6

Eddie Kasko missed the game, back in his hotel room with a stomach virus. Third-base coach Eddie Popowski managed the Red Sox, though he was quick to credit Kasko for the lineup, and Tiant’s performance did not leave Pop much work to do.7

“Sure, every pitcher likes to pitch a no-hitter,” Tiant said after the game. “But you got to be lucky. … We’re close in the pennant race now. I’ve got a good chance to get in the rotation.”8

When Kasko returned a few days later, he announced that Tiant would indeed stay in the rotation, at least for a while. “He deserves it,” said the manager in an extraordinary bit of understatement. After three straight complete-game victories, including a three-hitter and two-hitter, the spot starter would start again.9

There were six weeks to go, there was a pennant race heating up, and the Red Sox hoped that Tiant could be of some help.