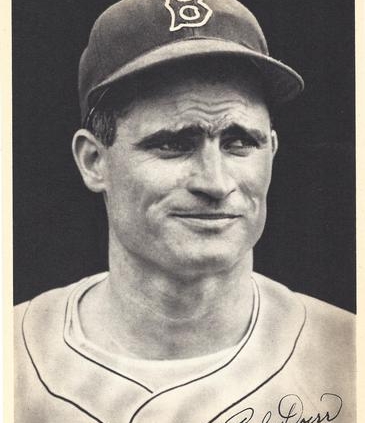 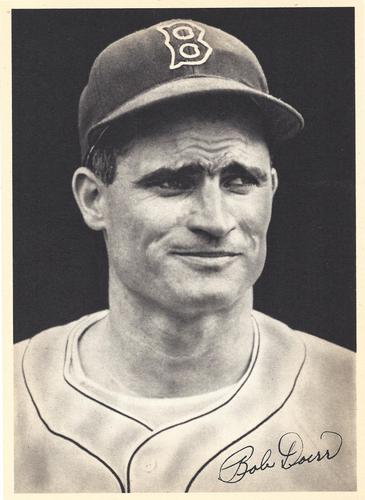 August 2 was celebrated as Bobby Doerr Day at Fenway Park. For the “silent captain” of the Red Sox, it was like Midsummer Christmas.

He received both a one-ton Chevrolet truck and a tractor to be delivered to his ranch in Oregon, a Cadillac, a radio, a clock, a barometer, a red leather chair with ottoman, an outboard motor, a juke box, an electric blanket, a $2,500 mink stole for his wife, Monica, and a few live mink for their ranch. His five-year-old son, Donnie, got a bicycle, a wagon, an electric train set, and more. Red Sox owner Tom Yawkey presented Doerr the promise of a power lighting plant for the ranch, which lacked any public utilities.1

The Boston Globe’s Harold Kaese wrote that Doerr “had enough merchandise when the presentations were concluded to start a country store.”2

All of the runs in the ballgame that followed came in the first inning. It was a Saturday night game, played in the first year that Fenway Park had lighting for night games.3 The Red Sox were riding a four-game losing streak.

The visiting Detroit Tigers batted first, facing right-hander Tex Hughson. He’d been a 20-game winner (20-11) the year before but was scuffling in 1947 due to arm trouble. He’d won his last two decisions but was still just 8-9, with an earned-run average of 3.88. Hughson retired two of the first three batters on fly balls, but in between the two outs, first baseman Roy Cullenbine singled over second base and into center field.

Third baseman George Kell singled to right field, and Pat Mullin, the Tigers right fielder, singled to right too, driving in Cullenbine. Hughson then walked center fielder Hoot Evers, loading the bases, but got the second baseman, Eddie Mayo, to ground out to first base, Hughson covering the bag. The Tigers held a 1-0 lead, though clearly it could have been a lot worse.

Pitching for Detroit was Virgil Trucks. The right-hander from Alabama was in his sixth season in the major leagues. His record was 7-6, with a 4.31 ERA. On his very first pitch, he was greeted with a triple to the 379-foot marker in right-center field by Boston right fielder Sam Mele.4

Shortstop Johnny Pesky was up next. He grounded out right back to Trucks, who looked at Mele to hold him at third base and then threw to first to retire Pesky. Center fielder Dom DiMaggio flied out to right field, but too shallow for Mele to tag and score.

That brought up left fielder Ted Williams. On a 2-and-1 count, he clouted one “into the net, over the top of the deep left-center field wall, not far from the flag pole.” It was a two-run homer, a “smack of genuine authority.”5 It was Williams’s fifth career home run off Trucks.6 It gave the Red Sox a 2-1 lead.

Doerr followed by topping a nubber in front of the plate, pounced on by catcher Bob Swift, who threw to Cullenbine for the third out. Doerr, as it happens, had a disappointing night at the plate, going 0-for-4. Afterward Doerr said Trucks had given him something for Doerr Night, too: “He gave me some good pitches, but I couldn’t do anything with them.”7

No one reached base for either team in the second inning.

In the third, Hughson walked Dick Wakefield but nothing came of it. Trucks walked Hughson in the bottom of the inning and Pesky singled; the other three batters (including Williams and Doerr) made outs.

Eddie Mayo singled for Detroit in the fourth, extending his hitting streak to 20 games. (The streak was snapped the next day.) No one else, from either team, reached base in that inning, though there was a very close play at first base and the unusually undemonstrative Doerr showed he was pretty convinced he had beat the throw from shortstop and was safe. Umpire Ed Hurley had a different opinion.

One player from each team got a base hit in the fifth, both with two outs – Wakefield singled for the Tigers (he was out trying to reach second base on a gem of a throw by DiMaggio), and Mele doubled high off the center-field wall for the Red Sox.

In the sixth inning, after two outs, both Evers and Mayo singled, but no runs scored. DiMaggio singled to lead off the bottom of the inning for the Red Sox, but Williams made an out and Doerr hit into a 6-4-3 double play.

Red Sox third baseman Sam Dente (grandfather of Red Sox 2016 Cy Young Award winner Rick Porcello) singled in the seventh but was the only one for either team to reach base in that frame. He remained on first base when the inning ended.

With two innings to go, and still down by just one run, the Tigers loaded the bases in the top of the eighth. After two outs, Mullin walked, and Evers reached on an error by Dente. Mayo was walked intentionally. But pinch-hitter Vic Wertz, batting for Swift, hit a “weak grounder to the box.”8 Hughson threw to first base for the third out.

The Red Sox got two runners on base in the bottom of the eighth, thanks to two-out singles by DiMaggio and Williams, but Doerr made an out to end the threat.

Both starting pitchers were still on the mound through eight innings. Manager Steve O’Neill had pitcher Fred Hutchinson bat for Trucks to lead off the top of the ninth. Hutchinson had pitched a complete-game 3-1 victory the night before and drove in all three runs with a with a three-run triple in the sixth inning.

But this time Hughson struck out Hutchinson. Eddie Lake struck out, too. And Cullenbine got wood on the ball, driving the ball to deep right field, but it was hauled in by DiMaggio for the final out of the game.

Hughson evened his record at 9-9. He’d given up seven base hits, all singles. He’d walked four. The loss incurred by Trucks left him with an even record as well: 7-7. Trucks had walked only one but given up nine hits – including the leadoff triple by Sam Mele and the first-inning, game-winning home run to Ted Williams.

The game only took an hour and 48 minutes to play. It was no doubt enjoyed by most of the 32,794 who pretty much filled Fenway Park.