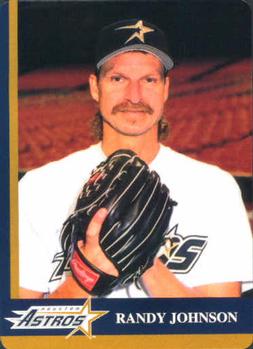 In 1998 Houston’s deadline deal for Seattle ace Randy Johnson stunned baseball. Johnson’s 12-strikeout debut on August 2, two days after the trade, gave the Astros an immediate return on their investment, but they also needed Carl Everett’s and Ricky Gutierrez’s eighth-inning clutch hits to secure a 6-2 win in Pittsburgh.

As the 1998 trading deadline approached, the market offered no bigger upgrade than The Big Unit. An imposing presence on the mound and within the sport, the 6-foot-10 left-hander won the American League Cy Young Award in 1995 and finished no worse than third in the voting four times in five seasons. His powerful side-slung pitches generated more than 12 strikeouts per game between 1995 and 1997.

Johnson’s contract with Seattle ran through 1998; the Mariners announced before the season that they were not offering an extension.1 With Seattle out of contention before Memorial Day, trade rumors linked the 34-year-old Johnson to several pennant hopefuls, most prominently the Los Angeles Dodgers2 and New York Yankees.3 But a surprise bidder, never mentioned through months of speculation, ultimately landed him. Astros general manager Gerry Hunsicker, his team leading the Cubs by 3½ games in the National League Central Division, reached an agreement with Seattle’s Woody Woodward 10 minutes before the expiration of the July 31 deadline.4 A prospect-heavy package of Carlos Guillen, Freddy Garcia, and John Halama went to Seattle; in return, the Astros had the biggest-name trade acquisition in franchise history.5

Johnson was scheduled to start for the Mariners on August 2.6 He requested to keep the date with Houston, setting his debut for a Sunday afternoon in Pittsburgh.7 Johnson flew in from Seattle and reported the next day to Three Rivers Stadium, where the Astros sought their third win over the Pirates in three days.8

Pittsburgh’s Todd Van Poppel opposed Johnson. A first-round draft choice out of high school in 1990 and Baseball America’s number-one overall prospect a year later,9 the 26-year-old right-hander was now with his sixth professional organization. He had joined the Pirates two weeks earlier in a three-player trade with Texas, his fifth move in less than 24 months.10 The division runner-up to the Astros in 1997, Pittsburgh lagged in fifth place, 16 games back.

Van Poppel faced an immediate threat from the Astros’ league-leading offense. With one out in the first, Bill Spiers pulled a hanging breaking ball into the right-field corner and reached third when Jose Guillen bobbled the ball for an error. Derek Bell and Jeff Bagwell were due up next; a Houston lead seemed imminent. But Van Poppel met the challenge. Bell chased a curve for a strikeout. Bagwell, arms out of sync with the rest of his body, flied out to right, stranding Spiers at third.

Johnson took the mound in the bottom of the first, his provisional Astros pants two sizes too small for his 38-inch inseam.11 Any change in surroundings or discrepancy in fit seemed inconsequential: His first pitch sliced through the strike zone at 94 MPH. Johnson retired the side on 10 pitches, the last a fastball through Manny Martinez’s swing for strike three.

Three fly balls finished Houston in the second. Johnson allowed Guillen’s one-out single in Pittsburgh’s half of the inning but kept the game scoreless with two strikeouts, freezing Kevin Young with a 97 MPH fastball at the knees and getting rookie Aramis Ramirez to swing and miss at a high fastball.

Van Poppel recorded two strikeouts of his own in a perfect third. At bat in the bottom of the inning, his high bouncer off home plate skipped past a charging Craig Biggio for a one-out single. Kevin Polcovich, replacing regular second baseman Tony Womack in a righty-heavy lineup, watched five pitches, four of them off the plate, for a walk. The Pirates had two runners on base, but Johnson retired Jason Kendall and Martinez to end the inning.

Houston broke through in the fourth. Spiers again pulled a hanging breaking ball into the right-field corner and beat Guillen’s throw to second for a leadoff double. Working high in the strike zone, Van Poppel got Bell to swing and miss twice, but the Astros right fielder drove a curve to the warning track, advancing Spiers to third. Bagwell missed two Van Poppel sliders but lined a high fastball to center for an RBI single and a 1-0 Houston advantage.

After Johnson struck out two more Pirates in a scoreless fourth, the Astros threatened to expand their lead. Gutierrez walked on four pitches. Brad Ausmus reached for a curve and served it into center, putting two on with none out for Johnson. Astros manager Larry Dierker called for a bunt; Johnson, whose last sacrifice was in 1989 with the Montreal Expos, jabbed through Van Poppel’s pitch for a strikeout. Groundouts from Biggio and Spiers ended the inning, keeping the Pirates within a run.

Aramis Ramirez led off the fifth for Pittsburgh. He had reached the major leagues in May, less than a month before his 20th birthday, when poor play by the team’s third basemen forced his promotion after only 47 Triple-A games.12 Johnson’s fastball found the zone for strike one. Ramirez swung over a low-and-inside slider for another strike. The 0-and-2 pitch was another slider, but it stayed higher. Ramirez reached out and lifted it to left. Moises Alou went to the wall and jumped, but the ball cleared his glove for a game-tying home run.

Unfazed, Johnson struck out the next three Pirates, and the Astros quickly threatened to retake the lead. Bell led off the sixth with an infield hit and moved to second when Van Poppel dropped the ball for a balk. With a runner in scoring position, no outs, and Bagwell, Alou, and Everett coming up, the Astros had another prime scoring opportunity, but Van Poppel again held strong. Three fly outs, around an intentional walk to Everett, left Bell at second. Kendall’s leadoff single in the bottom of the inning hinted at a Pittsburgh counteroffensive, but Johnson fanned Martinez, Young, and Guillen for his second three-strikeout inning in a row.

Van Poppel dispatched Houston in order on six pitches in the seventh. He had faced the National League’s top offense and an ace mound opponent and given Pittsburgh a chance to win.13 After the seventh-inning stretch, the Pirates made their move. Mark Smith lined a high fastball into left for a single. Pittsburgh manager Gene Lamont turned to the bunt. Ramirez fouled off a sacrifice attempt; with the bunt sign off, he bounced a single into center. Shortstop Lou Collier fouled off two bunts, and then Johnson’s two-strike pitch hit him in the back leg. The bases were loaded with none out.

Keith Osik batted for Van Poppel but struck out on a slider down and in; Johnson had 12 strikeouts. Polcovich followed with a fly ball to right, deep enough to score Smith for a 2-1 Pittsburgh lead.

Six outs from a win, Lamont summoned left-hander Jason Christiansen, whose 1.63 ERA in 42 appearances entering the game led Pittsburgh’s bullpen. Sean Berry pinch-hit for Spiers and singled. After working the count full, Bell hit a potential double-play grounder to Collier; with Berry running on the pitch, the Pirates shortstop had to settle for the out at first.

Bagwell walked. Alou grounded sharply into the hole between short and third. Collier dived, backhanded the ball, and forced Bagwell at second. The tying run was on third; Christiansen was one out from getting out of the inning.

But Everett dropped a single into center to score Berry and tie the game. Aiming to preserve the deadlock, Christiansen got ahead of Gutierrez 1-and-2, then missed with a high fastball. Gutierrez lined the next pitch into the right-field corner for a double; Alou and Everett scored for a 4-2 Astros edge. Before Pittsburgh could retire the side, Tony Eusebio pinch-hit for Johnson and doubled in Gutierrez for the inning’s fourth run.

“It was exciting, but obviously I was real nervous,” Johnson said afterward. “I sure didn’t want to come and give a bad performance in my first outing. It’s nice to get a win to put the team at ease a little bit.”15

“With The Big Unit, this team has a chance to do great things,” Bagwell said.16

Five days later, Johnson shut out Philadelphia before a record crowd at a sold-out Astrodome.17 He started 11 games for the Astros down the stretch, racking up a 10-1 record, a 1.28 ERA, and 12.4 strikeouts per nine innings. Houston ran away with the division title, winning 30 of its first 39 games after the trade and finishing 12½ games ahead of the Cubs.18

“Johnson’s presence was good for the Pirates’ gate. As of 4:30 Saturday, before it was known Johnson would start for the Astros, the Pirates had sold 14,500 tickets for yesterday’s game,” the Pittsburgh Post-Gazette reported.19 The flood of walk-up sales that boosted paid attendance to 21,201 included my brothers, a friend, and me. We went to many games at Three Rivers Stadium in 1998, but this one seemed like more of an event than usual.

In addition to the Sources cited in the Notes, I consulted the Baseball-Reference.com and Retrosheet.org websites for pertinent material and the box scores. Other sources included a recording of the game broadcast by Houston’s KNWS-TV, available at the YouTube link, and a telephone interview with Scott Elarton, who pitched for the Astros in the game.

4 Tom Verducci, “Houston We Have Liftoff: The Arrival of Randy Johnson Sent the Expectations of the Astros and Their Fans Skyrocketing,” Sports Illustrated, August 10, 1998: 32.

8 “Nobody really knew him,” Astros pitcher Scott Elarton remembered in 2020. “He just showed up and pitched. He wasn’t really outgoing on the days he pitched. I didn’t really get to talk to him until the next day and then he was just like a big teddy bear.” Scott Elarton, telephone interview with the author, June 14, 2020.

14 “Saving Randy Johnson’s first game here wasn’t going through my mind,” Elarton said afterward. “But now that it’s over, I’m glad I did. I would have felt like an idiot if I had ruined everything.” Carlton Thompson, “First Impression: Unit Da Man,” Houston Chronicle, August 3, 1998: 1.

18 The Astros lost to San Diego three games to one in the National League Division Series. In two starts against the Padres, Johnson allowed only three earned runs in 14 innings but was the losing pitcher in both games. He signed as a free agent with the Arizona Diamondbacks after the season.