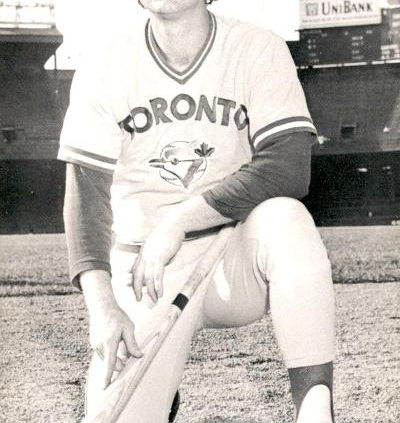 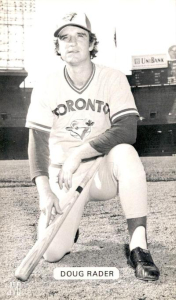 The inside-the-park home run is not only a gift to the swift. The hefty Prince Fielder hit two of them.1 Slow-footed catcher Gus Triandos, bulky first baseman Dick Stuart, and 40-year-old Bill Buckner did it too.2

The Toronto Blue Jays’ first inside-the-park home run came off the bat of Doug Rader, a 33-year-old veteran known more for his glove and his clubhouse pranks than his foot speed. On August 21, 1977, a Camera Day3 crowd of 12,421 saw Rader’s unlikely heroics at Anaheim Stadium during a 3-2 victory by the California Angels.

The Blue Jays were about three-quarters of the way through their inaugural season, and the team’s “baby book” of first accomplishments was still being filled in. As of August 21, no Blue Jays pitcher had thrown a no-hitter, a one-hitter, or even a two-hitter. Dave Lemanczyk had become the first Jays pitcher to win 10 games in a season about two weeks earlier. In the field, the Jays had yet to turn a triple play. No Toronto batter had hit three home runs in a game, or hit for the cycle, or hit a pinch-hit grand slam, or hit an inside-the-park home run.4

Rader, bought from the San Diego Padres on June 8, had two inside-the-park homers on his résumé, both while playing for the Houston Astros—on August 4, 1969, against the Cubs in Houston, and on August 31, 1974, against the Phillies in Philadelphia.5 He also held a dubious distinction that spoke to his relative lack of speed. In three earlier seasons, he’d ranked in the National League’s top 10 for grounding into double plays. In 1970 he hit into 23 twin killings, tied for second in the league, establishing an Astros team record that stood for decades.6 Rader was also known for pranks like dropping water balloons from hotel windows and carrying the Astros’ starting lineup to home plate in a skillet.7

Although Rader had five Gold Gloves on his trophy shelf, the Jays used him as a designated hitter almost as often as they used him at third base, and he started at DH on August 21.8 Manager Roy Hartsfield’s Blue Jays entered the day in last place in the American League East with a 42-77 record, 29½ games behind the first-place Boston Red Sox. That record couldn’t be considered entirely disappointing, since expansion teams typically struggle in their first year.

The Angels, on the other hand, were sorely underperforming. With a 58-60 record, they sat in fifth place in the AL West, 9½ games behind first-place Kansas City. The Angels entered the season with great expectations after signing star free agents Joe Rudi, Bobby Grich, and Don Baylor in November 1976. But injuries limited Rudi to 64 games and Grich to 52, and neither played on August 21. Baylor slumped badly for the first two months of the season, hitting under .200 as late as May 30 and hitting only .244 coming into the game. California’s offense, expected to be potent, instead trailed league averages in all major categories. The team’s performance cost manager Norm Sherry his job on July 10. Third-base coach Dave Garcia replaced Sherry as manager the rest of the way.

To start the August 21 game, Hartsfield tapped Jeff Byrd, a 20-year-old rookie making his 11th big-league appearance. Byrd had a 2-6 record and a 5.34 ERA. As it turned out, he had already earned his last major-league win: 1977 was his only big-league season, and he closed it with a 2-13 record and a 6.18 ERA. For California, starter Frank Tanana brought a 14-7 record and 2.31 ERA into the game. An elbow problem had dogged the 24-year-old Tanana earlier in the summer, forcing him to skip the All-Star Game.9 Still, the lefty from Detroit went on to lead the AL with seven shutouts and a 2.54 ERA, finishing ninth in voting for the Cy Young Award.

Toronto scrapped its way to a first-inning run, starting with one-out singles by second baseman Steve Staggs and center fielder Bob Bailor. When Tanana threw away the ball trying to pick off Bailor, the runners moved up. Tanana rebounded to strike out right fielder Otto Vélez, then walked Rader and first baseman Doug Ault to hand the Blue Jays a run. Third baseman Roy Howell popped to Angels third sacker Dave Chalk for the third out.

California claimed the lead in the bottom of the inning. Left fielder Gil Flores singled to left, second baseman Jerry Remy singled him to third, and right fielder Bobby Bonds doubled in Flores to tie the game. Byrd struck out Danny Goodwin, gave an intentional, bases-loading walk to Baylor, and fanned Byrd. Then he walked shortstop Rance Mulliniks to force in a second run. First baseman Dan Briggs grounded to second base to end the inning. Between them, Byrd and Tanana surrendered five hits, four walks—two run-scoring—and an error in the first inning, and both teams left the bases loaded.

After that sloppy beginning, Byrd and Tanana buckled down, pitching shutout ball in the second, third, and fourth innings. Tanana yielded three hits and a walk over that stretch, while Byrd gave up one hit and two walks. Toronto lost one of its biggest offensive weapons in the third inning. Bailor—hitting 2-for-2 in the game and .320 for the season—had to leave when he sprained his right knee stealing third base.10 Steve Bowling replaced him.

Bowling struck out and Vélez flied out to Flores to start the fifth. Rader followed with a routine fly ball to center field. Don Baylor, criticized that season for his subpar fielding and throwing,11 lost the ball in the sun, and it fell safely. He chased after the ball as Rader circled the bases. Baylor’s relay to Mulliniks was late and Rader steamed home with his 10th home run of the season, tying the game, 2-2.12 Rader had claimed another first in the history of the young Toronto franchise.13

After the game, Remy defended Baylor: “It was a damn shame. Fans boo him but there wasn’t anything he could do about it. Anybody can lose a ball in the sun and nobody tries harder than Don Baylor.”14 Manager Garcia called Baylor to task: “I know he lost it in the sun, but I do have to wonder why he didn’t go after the ball quicker. He hesitated a second before getting the ball, otherwise Rader would not have scored.”15

Baylor was “booed unmercifully” for the rest of the game.16 The fans’ jeers only got louder in the bottom of the sixth. After Baylor led off with a walk, Chalk flied to left fielder John Scott. Scott’s throw to Ault caught Baylor off first for a double play. Mulliniks struck out to end the inning.

Byrd worked six effective innings but weakened in the seventh. With one out, catcher and ninth-place hitter Terry Humphrey doubled to left field. Byrd got Flores on a groundball, but gave up Remy’s third single of the day, which drove in Humphrey for a 3-2 Angels lead. Reliever Tom Murphy struck out Bonds to end the inning. The Angels loaded the bases against Murphy in the eighth on a hit, a walk, and two errors. But Murphy got Humphrey to ground to Ault as the Angels again left the bases loaded.

Meanwhile, Tanana found a groove in the later innings. After Howell led off the sixth inning with a single, the California pitcher retired the final 12 Blue Jays batters in order. In the ninth, Toronto catcher Rick Cerone flied out to replacement center fielder Hector Torres, shortstop Dave McKay struck out, and Scott grounded to Chalk at third to end the game in 2 hours and 29 minutes.

Toronto ended the season with a 54-107 record, in last place, 45½ games behind the division and World Series champion New York Yankees. California stayed in fifth place, closing at 74-88, 28 games back. The Angels improved to second place in 1978, then won their division in 1979. The Blue Jays took longer to jell, becoming competitive in the mid-1980s and winning their first division title in 1985.

Rader’s inside-the-park heroics heralded a power surge of sorts. The veteran hit three more homers in the ensuing week, all of the over-the-fence variety. They were his final home runs: Toronto released Rader in spring training the following year, ending his 11-season major-league career.

Image of 1978 Topps card #651 downloaded from the Trading Card Database.

4 Blue Jays “firsts” not yet achieved as of August 21, 1977, taken from history section of 1998 Toronto Blue Jays media guide in the author’s collection.

6 Rader still held the Astros record for grounding into double plays almost 30 years later, according to a 1999 Astros media guide in the author’s collection. At the start of the 2021 season, that record was held by Miguel Tejada, who hit into 32 twin killings in 2008, according to the team’s 2020 media guide: 374. In 1970 Cleon Jones of the Mets led the NL with 26 GIDP; Rader and Joe Torre of the Cardinals tied for second.

8 Rader made 45 appearances at third base and 35 at designated hitter for the Blue Jays.

13 Rader holds another “first” distinction in Blue Jays history. On July 13, 1977, he became the first Jay to homer in extra innings, connecting off Chicago’s Jack Kucek in the 11th inning. Rader beat Bob Bailor to this distinction by two days, according to the team’s 1998 media guide.