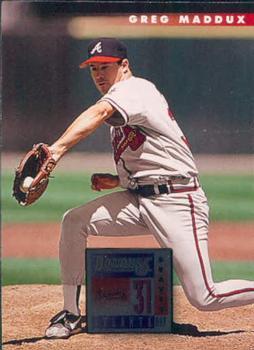 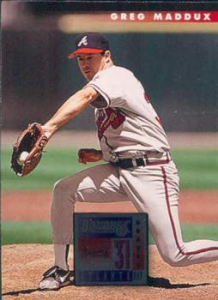 After debuting in 1986, Greg Maddux left the Chicago Cubs following the 1992 season with a 95-75 record, a career ERA of 3.35, and the 1992 Cy Young Award. Over the next six seasons with the Atlanta Braves, he dominated the National League with a 107-42 record and a 2.15 ERA and won three more Cy Youngs from 1993 through 1995. In 1995 he won games in the Division Series, Championship Series, and then the World Series as the Braves claimed their first championship since their arrival in Atlanta in 1966.

During the season after Maddux’s departure, the Cubs called up Steve Trachsel in September 1993. Trachsel was 0-2 in three starts but had a 9-7 record with a 3.21 ERA in 1994. Because of his control and mentality, he drew comparisons to the former Cubs ace, even being called “Maddux Jr.” by some teammates.1

Maddux and “Maddux Jr.” first faced each other on August 26, 1995, at Wrigley Field, as the title-bound Braves rolled to a 7-2 win behind Maddux’s seven-hit complete game. Trachsel did not make it out of the third inning, allowing five runs on his way to a 7-13 record in 1995.

The Braves were 79-47 and in first place in the NL East Division with an 11-game lead over the second-place Montreal Expos. This meeting with Chicago was the first of a three-game series that closed out a nine-game homestand. They won the first five games before the Cincinnati Reds eked out a 3-2 win in 13 innings on August 22.

The Cubs were 63-62 and tied for third place in the NL Central but just 3½ games back of the first-place Houston Astros. After a 4-2 homestand at Wrigley Field, they arrived in Atlanta without slugger Sammy Sosa, who had suffered a broken hand three days earlier when he was hit by a pitch from Florida’s Mark Hutton.3

After a 2-hour 14-minute rain delay, the game finally began ­– although many of the announced crowd of 38,210 had already deserted Atlanta-Fulton County Stadium. Rain would linger during the first four innings.4

The Cubs missed a chance to score on Maddux before he settled in. After two quick outs, Maddux allowed singles to Mark Grace and Luis Gonzalez but struck out Dave Magadan swinging at a full-count pitch to end the threat.

“Maddux’s changeup is so good that it was hard for Magadan to pick up,” said Cubs manager Jim Riggleman after the game.

In the bottom of the first, Chipper Jones connected off Traschel for a long two-out homer to left to put Atlanta up, 1-0.5 The homer was the 50th of Jones’s career and ran his career-high hitting streak to 17 games.6

For the next three innings, Maddux was on top of this game; he retired 12 of 13 batters on 10 groundouts and two strikeouts. The only baserunner was Scott Servais, who grounded a single up the middle with one out in the fifth.

Traschel wasn’t as sharp but worked around a one-out double by 19-year-old Andruw Jones7 and a walk to Mark Lemke in the second, and walks to Terry Pendleton and Fred McGriff in the third.

But his luck ran out in the fourth when Eddie Perez singled with one out and Lemke doubled him to third. With two outs and a full count, Marquis Grissom doubled to the wall in right field to put Atlanta up 3-0. The blow extended Grissom’s hitting streak to 27 games, tying him with San Diego’s John Flaherty for the major-league season high.8

Chipper Jones led off bottom of the fifth with his second homer against Trachsel to increase the lead to 4-0.

The Cubs finally got to Maddux in the sixth. Brian McRae led off by reaching second on Ryan Klesko’s error in left. One out later, Grace lined a homer down the line in right to cut the lead in half.

Atlanta threatened in the bottom of the sixth when Maddux and Pendleton singled, but Larry Casian relieved Trachsel and got Chipper Jones to line out to deep right.

After striking out Ryne Sandberg and Servais to start the seventh, Maddux gave up a homer to José Hernández to bring the Cubs within a run. Pinch-hitter Brooks Kieschnick then popped up for the third out.

Maddux’s night was done; he had gone seven innings, allowing two earned runs and no walks while throwing just 84 pitches. Only three Cubs managed to get a ball out of the infield. It was the ninth straight game in which Maddux had pitched at least seven innings9 and the 27th time in 29 starts that he had walked two or fewer.

Greg McMichael hurled a perfect eighth before Mark Wohlers pitched a one-two-three ninth for his 32nd save of the season.

As a result of the game, Maddux and Trachsel had swapped places on the ERA leaderboard; Maddux’s remained at 2.69 while Trachsel’s was up to 2.80. The win moved Maddux to 4-0 against his former team.10

“He was absolutely at the top of this game,” said Braves pitching coach Leo Mazzone. “But it just breaks my heart that he makes two bad pitches all night and they get hit.”11

“We owed Mad Dog a few runs and we finally got him some and it’s about time,” added Chipper Jones.12

Regarding Grissom’s two-run double that put Atlanta up 4-0, Riggleman had wanted Trachsel’s full-count pitch farther off the plate with first base open.13

Trachsel defended his offering: “It was a good pitch. I had him out in front and he didn’t hit it well. Jones hit two good pitches too. A back door curve he had never seen and a fastball in. The mound was fine, but I had a problem keeping my hand dry.”14

“I felt like I threw the ball well,” he added. “I didn’t think those pitches were mistakes, but they’re the best team in baseball for a reason. Give them some credit.”15

Maddux finished the year with an ERA of 2.72 ­– trailing only Florida’s Kevin Brown ­– and a record of 15-11. It was the fewest wins in his 11-year stint with the Braves, which ended in 2002. He finished second in the NL with 245 innings pitched, behind his teammate John Smoltz, ending a streak of five consecutive years of leading the league. The Braves won the NL East championship with a 96-66 mark.

Maddux led the Braves back to the World Series, where he gave the Braves a two-games-to-none lead over the New York Yankees with eight shutout innings in Game Two; but he suffered a tough 3-2 loss to Jimmy Key as the Yankees won their fourth straight game to deny the Braves back-to-back titles.

Unlike Maddux, who would appear in 35 playoff and World Series games, Trachsel’s teams made the playoffs just once in his 16-year career, in 2006; after a no-decision in the NLDS, he lasted just one inning and took the loss for the New York Mets in Game Three as they lost the NLCS in seven games to the St. Louis Cardinals.

The author attended this game with his father and a college buddy. After waiting out the long rain delay before the game, they sneaked down and sat a few rows above the Braves dugout. An usher asked if they had tickets for those seats, but when he learned they had driven from Arkansas for the game, he let them stay. After the game, the trio got off the city rail line at the wrong station and had to hail a cab at 1:00 A.M. to get back to their vehicle.

They were back at Atlanta-Fulton County Stadium the following day when Fred McGriff went 5-for-5 and hit the game-ending home run.

Acknowledgments
This article was fact-checked by Bruce Slutsky and copy-edited by Len Levin.

In addition to the references cited in the Notes, the author consulted data from Baseball-Reference.com and Retrosheet.org.

7 Andruw Jones had been called up to the Braves for his major-league debut on August 15. This was his second career double and the eighth of his 1,933 career hits.

8 Rozner. Grissom’s streak, the second longest in the majors in 1996, reached 28 games the next day before ending on August 25 when he went 0-for-4.