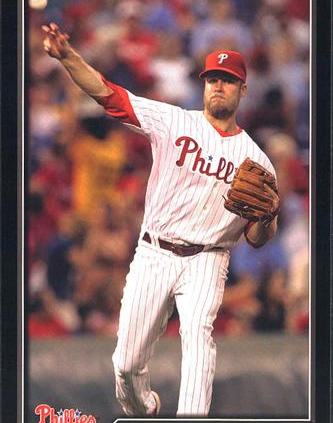 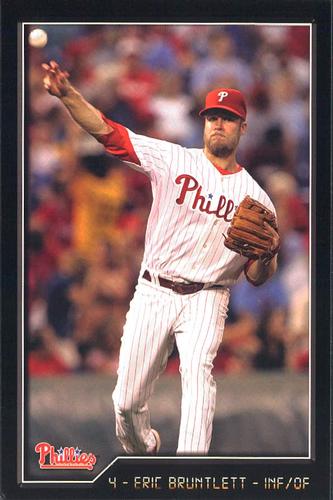 “The whole game, it seemed was strange,” Eric Bruntlett said in an interview after the Philadelphia Phillies’ 9-7 victory over the New York Mets at Citi Field on August 23, 2009.1

The defending World Series champion Phillies, leading the National League East Division by 6½ games over the Atlanta Braves and Florida Marlins, decided to rest regular second baseman Chase Utley during this Sunday afternoon game and inserted the 31-year-old Bruntlett in his place. This was only Bruntlett’s fourth start of the season at second base and first in more than a month.3

Bruntlett had been picked up in a November 2007 trade with the Houston Astros. Philadelphia closer Brad Lidge was also part of the trade that sent three Phillies, including Michael Bourn, to the Astros.4 In two seasons as a reserve infielder in Philadelphia, Bruntlett was best known for his work off the bench in the 2008 World Series: a pinch-hit homer in Game Two, a walk-off winning run after coming in as a defensive replacement in Game Three, and the Series-deciding run scored as a pinch-runner in Game Five.

Bruntlett’s description of the game in New York as “strange” was true from the start. The Phillies, 14½ games ahead of the fourth-place Mets, sent nine men to the plate in the first inning and jumped to a 6-0 lead on three-run home runs from Jayson Werth and Carlos Ruiz off Mets starter Oliver Peréz.

Phillies starter and future Hall of Famer Pedro Martinez batted after Ruiz’s homer. He had been signed as a free agent by Philadelphia the previous month.5 The 37-year-old right-hander was in the 18th and final season of his illustrious big-league career after previous stints with the Los Angeles Dodgers, Montreal Expos, Boston Red Sox, and Mets. Martinez was making just his third start for the Phillies, and it was his first appearance back in New York after four seasons with the Mets, which included All-Star selections in 2005 and 2006.

He received a warm welcome from the Mets fans as he stepped into the batter’s box in the first inning before having thrown his first pitch.6

Three pitches later, Peréz was lifted after throwing three consecutive balls to Martinez.7 “That was kind of weird,” Martinez said after the game.8 The Mets brought in reliever Nelson Figueroa, who, having assumed the three-ball count, came back to strike out Martinez and end the inning.

The quirkiness continued in the bottom of the inning as the leadoff hitter for the Mets, Ángel Pagán, hit a line drive into the left-center-field gap that stuck under the outfield wall’s padding. Thinking the ball would be ruled dead, Phillies center fielder Shane Victorino raised his arms instead of retrieving the ball, but second-base umpire Rob Drake ruled the ball to be in play.9 Even though Pagán slowed down on his approach to third base, he kept going for an inside-the-park homer, scoring easily before left fielder Raúl Ibañez retrieved the ball and returned it to the infield.

Later, Victorino said he was told by an umpire that it is a judgment call whether a lodged ball is playable, and in this case Drake ruled it to be a live ball.10

The Mets made the score 6-2 later in the inning when Jeff Francoeur tripled, driving in Daniel Murphy.

In the third inning, the Phillies restored their six-run advantage when Martinez drove in a run on a bases-loaded single, and Jimmy Rollins followed with a sacrifice fly. The Mets answered in the bottom half of the inning on Pagán’s second home run of the game; this one left the playing field. Later in the inning, Cory Sullivan’s groundout to shortstop drove in Luis Castillo, cutting the deficit to 8-4.

Martinez settled down and allowed only one hit over the next three innings. Mets relief pitcher Pat Misch, who replaced Figueroa to start the fourth inning, did even better. He gave up just one hit in four innings of work, keeping it a four-run game heading into the bottom of the seventh.

Martinez left the game having allowed four runs on seven hits and a walk in his six innings of work for the Phillies. He was replaced by Chad Durbin, who gave up a walk, a stolen base, and an RBI single by Murphy that got the Mets to within three at 8-5.

The teams traded runs in the eighth inning. Sean Green came on in relief for the Mets after they had pinch-hit for Misch in the seventh. The unusual twists continued as Green, struggling with his control, walked pinch-hitter Matt Stairs, then aided the 41-year-old Stairs’s path around the bases with two wild pitches. In the bottom half of the inning, Phillies reliever Ryan Madson gave up an RBI double to Anderson Hernández.

That set the stage for the ninth inning with the Phillies leading, 9–6.

The Mets brought in Elmer Dessens to pitch the ninth. After the first two batters were retired, Bruntlett came to the plate.

Coming into the game, Bruntlett’s average for the season was .128,11 but he was already 3-for-4 in this game. On a 2-and-1 pitch, he hit a line drive into the gap in right. Francoeur made a diving attempt, but umpire Drake ruled the ball was trapped, and Bruntlett easily made it to third base with an apparent triple.

Mets manager Jerry Manuel came out of the dugout to argue the call. The umpires met to discuss the play and reversed their decision, ruling that Francoeur had made a clean catch. This took the triple away from Bruntlett, ended the inning, and brought an irate Phillies manager, Charlie Manuel, out to argue the reversal. He ended up getting thrown out of the game by Drake.12 Television replays showed clearly that Francoeur had made the catch, and the end result was a correct call.

Lidge came in to pitch the bottom of the ninth. The previous season, Lidge was a perfect 41-for-41 in save opportunities, and 7-for-7 in the postseason, including the Phillies’ Series-clinching win.13 In 2009, however, he had struggled.14 He already had eight blown saves in 32 opportunities as he entered this game to face the top of the Mets lineup.15

Pagán led off with a hard groundball down the first-base line that got through first baseman Ryan Howard and went into the right-field corner. Pagán ended up at third on Howard’s three-base error. On the next pitch, Castillo hit a grounder right at second baseman Bruntlett. The ball bounced out of his glove and Bruntlett recovered too late to get Castillo, who was ruled safe on a close play at first while Pagán scored, and the Mets were within 9-7.

The next batter, Murphy, also swinging on the first pitch, hit a groundball up the middle. It was a difficult play for Bruntlett, who made a sliding attempt behind second but the ball bounced off the heel of his glove. The runners were safe, and the official scorer credited Murphy with a hit.

Television cameras showed Utley, sitting on the bench. The Mets’ commentator, Ron Darling, mentioned that resting Utley in favor of Bruntlett “might have cost them there with Bruntlett’s play.”

Francoeur, who had tripled in the first inning and also made the diving catch on Bruntlett’s line drive in the top of the ninth, came to the plate as the potential winning run.

With the count 2-and-2, the Mets started the runners. As Castillo headed to third and Murphy to second, Francoeur hit a hard line drive up the middle.

Bruntlett, who was running to cover second, was right at the base to catch the line drive. He immediately stepped on second to double off Castillo. Turning to look at first, he saw Murphy right in front of him.

As Murphy tried to backpedal away, Bruntlett easily applied the tag to end the game.

In the remainder of the season, Bruntlett was used mostly as a pinch-hitter or pinch-runner. He appeared in the field in only four more games. His final major-league moment of glory was scoring the tying-run as a pinch-runner on Jimmy Rollins’ walk-off double against the Los Angeles Dodgers in Game Four of the National League Championship Series, and his final big-league appearance was as a pinch-hitter in Game Three of the 2009 World Series, as the New York Yankees denied the Phillies’ bid for a repeat title.

While his seven-year career was not particularly memorable, with only a .231 career batting average and 0.8 career Wins Above Replacement, Bruntlett will always be remembered for his game-ending unassisted triple play in a “strange” game.

This article was fact-checked by Thomas Brown and copy-edited by Len Levin. The author has much appreciation for the support and guidance obtained from John Fredland.

In addition to the sources cited in the Notes, the author accessed Baseball-Reference.com and Retrosheet.org for pertinent information, including the box score and play-by-play. He also reviewed a video recording of Pix Sports’ (WPIX-TV) game broadcast, posted on YouTube.

2 As of 2022, Major League Baseball recognizes 15 unassisted triple plays. Some people, including major-league official historian John Thorn, believe one was completed by Paul Hines of the Providence Grays on May 8, 1878, bringing the total to 16. Johnny Neun is the only other player to end a game with an unassisted triple play. This occurred on May 31, 1927.

5 Jere Longman, “Martinez Joins Phillies and the Disabled List,” New York Times, July 15, 2009: B13. The Phillies were hoping Martinez would have enough left to shore up their pitching staff, which was shorthanded because of midseason injuries.

7 The pitch count of 44 for Peréz given by Baseball Reference and Retrosheet would indicate he was removed after the eighth batter of the first inning and before Martinez came to the plate. However, the AP account on ESPN and the video of the game confirm that Peréz was removed after throwing three balls to Martinez.

13 Stockburger, “Phillies Most Impactful Trade Made with Every Team.”