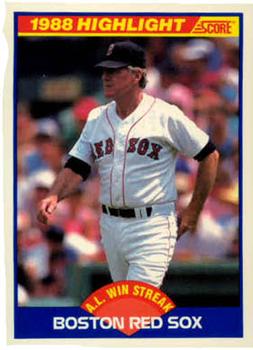 The rumors were swirling in July 1988. The Boston Red Sox were 43-42 and nine games behind the first-place Detroit Tigers in the American League East. Would Boston make a change at the top? “It would come as a surprise to me,” said manager John McNamara, when he was told about speculation that he would be fired by the All-Star break.1 But on July 14, McNamara was replaced by third-base coach and longtime minor-league manager Joe Morgan.

Morgan, a lifelong Red Sox fan and a native of Walpole, Massachusetts, a Boston suburb, made it clear he was the man for the job, any “interim” label aside. “Lou Gorman [general manager] took me aside and said, ‘We’re letting McNamara go and we want you to take over until we can find someone permanent.’ I said, ‘Well don’t look too hard because he’s standing right in front of you and you’re talking to him.’”2

What happened next would be remembered fondly as “Morgan Magic.” The Red Sox won their first 12 games with Morgan at the helm, capped off by Roger Clemens’s shutout of the Texas Rangers on July 25. Morgan, with the interim tag now removed, gave the credit to the players. “I didn’t make a whole lot of changes,” he recalled. “I gave [Todd] Benzinger more at-bats and I put Jody Reed at short for more offense, but we were a good team that finally got it together.”3

Clemens would later add, “I think that when you have a manager change in the middle of the season, I think it lit a fire under all of us.”4

The Red Sox won 18 of Morgan’s first 19 games as manager and chased another bit of history when they hosted the Rangers on August 3. With 21 consecutive home victories, Boston was one shy of the American League record set by the 1931 Philadelphia Athletics.

Veteran left-hander Bruce Hurst got the start for Boston. Hurst, who tossed a complete-game victory against Texas on April 17, in the Rangers’ previous visit to Fenway Park, had won two straight starts during the streak and came into the game with a record of 11-4.

He was opposed by right-hander (and Canton, Massachusetts, native) Bobby Witt, who was 3-1 since being recalled from Triple-A Oklahoma City, where he worked with pitching coach and newly elected Hall of Famer Ferguson Jenkins. Witt had gone 0-5 with a 7.68 ERA before being sent down.

Both pitchers worked a scoreless first inning. Hurst retired the Rangers in order on three groundballs. Witt gave up a leadoff single to Wade Boggs and walked Mike Greenwell with two outs. Greenwell advanced to second base on a passed ball by Jim Sundberg, but Witt got out of the jam by striking out Ellis Burks to end the frame.

The Rangers got on the board in the second, with a little help from the Red Sox defense. Pete Incaviglia led off with a single to center. With Pete O’Brien at the plate, Incaviglia stole second and advanced to third on a throwing error by catcher Rich Gedman. O’Brien, who entered the game with a .350 batting average at Fenway Park, laced a double down the right-field line, scoring Incaviglia. The Rangers threatened to expand their lead when Bob Brower bounced back to the mound and was safe when first baseman Benzinger could not handle the throw from Hurst. But Gedman made up for his earlier error by gunning down Brower trying to steal second. Sundberg popped up to first, bringing an eventful inning to an end.

Down 1-0, the Red Sox answered in the fourth inning. After a leadoff walk to Greenwell, Burks beat out a potential double-play ball. With one out, Burks avoided the tag on another double-play attempt and reached second with two outs.

Burks had burst onto the scene in 1987, and his 27 steals were the most by a Red Sox rookie since Tris Speaker swiped 35 bases in 1909. Expectations were high. “It was a lot of pressure on a young kid, to hear comparisons to Willie Mays,” Burks said later. “I put too much pressure on myself instead of relaxing and playing like I can play.”5

That brought slugger Jim Rice to the plate. Two weeks earlier, Rice had a confrontation with Morgan, resulting in a three-game suspension. Morgan had sent Spike Owen in to pinch-hit for Rice against the Minnesota Twins on July 20, a decision that did not go over well with Rice. Gorman later said, “They broke it up before punches were exchanged, but there was physical contact.”6

“We couldn’t condone the action, so we had to suspend Jimmy,” Morgan said. “I have great respect for Jim Rice, but you can’t have anybody physically intimidate or question a manager’s authority.”7

After Burks extended the inning with his hustle, Rice made the Rangers pay with a deep drive into the right-field bullpen to put the Red Sox in front, 2-1.

Boggs collected his second hit of the night in the sixth, a double past a diving center fielder Oddibe McDowell. Marty Barrett moved him to third with a sacrifice bunt. Texas manager Bobby Valentine brought the infield in. But Dwight Evans pounced on the first pitch and dropped a single in front of Incaviglia to drive in his 72nd run of the season and give Boston a 3-1 lead.

Texas came right back in the seventh inning. With one out, Jeff Kunkel lined a single to center. McDowell followed with another single, but Burks cut the ball off before it hit the gap, holding Kunkel at third.

That was all for Hurst, as Morgan handed the ball to veteran Bob Stanley. But Stanley hit Scott Fletcher on a 1-and-2 count, loading the bases. Switch-hitting Ruben Sierra, now turned around to bat lefty, drove a hard grounder off Stanley’s shin. Stanley recovered and fired home, but the throw was off the mark. Kunkel scored, as did McDowell, around from second. Incaviglia followed with a hard line-drive single, driving in Fletcher with the go-ahead run, and Stanley’s night was over.

Morgan brought in left-hander Tom Bolton, who did his job, striking out the lefty O’Brien. Dennis Lamp was next in from the bullpen. After a walk to Steve Buechele to load the bases, pinch-hitter Geno Petralli grounded into a fielder’s choice to third. But the damage was done, with Texas taking a 4-3 lead in the back-and-forth affair.

After the seventh-inning stretch, the Red Sox got the break they needed. With one down, Boggs stepped to the plate and lifted a lazy fly ball to left, which drifted further and further toward the foul line. Incaviglia slipped, the ball dropped in and Boggs found himself standing on third, giving him a single, double, and triple in the game. Barrett hit a grounder to second base to drive in Boggs with the tying run.

Lamp shut down the Rangers’ offense in the eighth inning, and the Red Sox looked for another rally in their half. After Greenwell grounded out, Burks worked a one-out walk, Witt’s fifth of the game. Benzinger struck out, bringing Rice to the plate with two down. Burks stole his 16th base of the season, barely beating a strong throw by Sundberg. Rice was intentionally walked, and Jody Reed stepped in.

Reed, who came into the game with a .333 batting average with men in scoring position, delivered. With a full count, his sharp groundball got past a diving shortstop Fletcher, and Burks scored to give Boston a 5-4 lead.

The Red Sox turned to Lee Smith to close it out. Smith, in his first season in Boston after eight years with the Chicago Cubs, had converted 17 of 23 save opportunities. But he would have to go through the heart of the Rangers’ order.

Sierra lofted an easy fly ball to Burks for the first out. Incaviglia followed in a matchup of power vs. power. His high foul popup stayed in play and Gedman squeezed it for out number two. Down to their last out, O’Brien worked his way to a full count, but swung through a nasty slider, and the comeback was complete.

The Red Sox won their 22nd consecutive home game, tying the American League record. It was Morgan’s 19th win in his first 20 games as Boston’s manager, and for the first time all season, the Red Sox caught the Tigers atop the division.

The Red Sox returned to Fenway Park after an eight-game road trip to win two straight against the Tigers, setting a major-league record with 24 consecutive home victories.

Morgan Magic cooled off the rest of the way, but Boston eventually moved back into first place to stay on September 4. They finished 89-73, won the AL East title by just one game over Detroit, and advanced to the AL Championship Series against the 104-win Oakland Athletics.

The Red Sox were swept by the heavily favored A’s. But the summer of 1988 would always be remembered for the incredible run led by an unlikely manager, known affectionately by Red Sox fans as Walpole Joe.

In addition to the sources mentioned in the Notes, the author consulted Baseball-Reference.com, Retrosheet.org, SABR.org, and the original NESN television broadcast from August 3, 1988.

5 Craig Mulder, “Ellis Burks Battled Injuries, but Could Do It All on the Field,” Baseball Almanac, December 14, 2009.