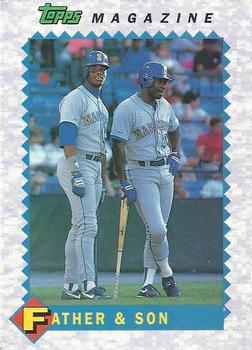 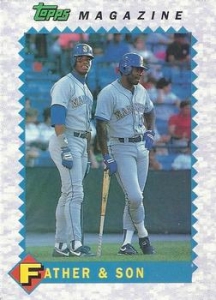 In the dramatic closing scene of the 1989 baseball movie Field of Dreams, Kevin Costner, playing the role of Ray Kinsella, asks his father, John, “Hey, Dad. You wanna have a catch?” They proceed to throw the ball back and forth, a setting that has similarly happened countless times in the real world between fathers and sons for over a hundred years. Ken Griffey Sr. and his son Ken Jr. realized that opportunity on baseball’s biggest stage when they played side-by-side in the outfield for the Seattle Mariners on August 31, 1990. They became the first father-son duo to play together in a major-league game.

There have been numerous occasions where major-league brothers played together on the same team, but never a father and son before the Griffeys. In fact, there had never been a father and son combination active in the majors at the same time until Griffey Jr. joined the Mariners in 1989, while his father was with the Cincinnati Reds.1

Twenty-year-old Griffey Jr. was in his second major-league season in 1990, following his highly anticipated arrival the year before. The overall number 1 pick in the June 1987 amateur draft, Griffey Jr. practically went straight from Single A ball (112 games) to the majors, playing only 17 games at the Double-A level, bypassing Triple A completely, and debuting with the Mariners on Opening Day 1989.2

Griffey Jr. was exceeding Seattle’s expectations and rapidly became the face of the franchise. Leading up to the historic game on August 31, he was batting .306, with 18 home runs and 63 RBIs for the fifth-place Mariners. It was the first of eight .300-average seasons during his 22-year career.

Griffey Sr. was 40 years old and seemingly on his way out of baseball. He was in his 18th major-league season and had mostly been a platoon player since 1986. His main contributions to baseball history came as a member of the famed Big Red Machine, the Cincinnati Reds teams that captured back-to-back World Series championships in 1975 and 1976. In right field on those Reds teams, Griffey Sr. was a two-time All-Star and posted a batting line of .310/.377/.438 during the 1970s.

After stints with the New York Yankees and Atlanta Braves, Griffey Sr. returned to the Reds during the 1988 season. He had been used primarily as a pinch-hitter in 1990 but had been 0-for-23 in that role since June 2.

The Reds held a comfortable 7½-game lead over the San Francisco Giants in the National League West on August 17. Reds manager Lou Piniella called Griffey Sr. into his office the next morning, and shortly afterward Griffey Sr. left the clubhouse. The Reds later announced that he had decided to retire as an active player, although neither Piniella nor general manager Bob Quinn tried to characterize the decision as voluntary. The Reds needed the roster spot to make room for pitcher Chris Hammond.

Griffey Sr.’s departure was not well received by his teammates, who valued his veteran presence in the clubhouse. Reds broadcaster Joe Nuxhall said, “Every one of those guys adores him.”3

It was later revealed that the Reds initially had asked Griffey Sr. to go on the disabled list to free up the roster spot. But he refused because he said he wasn’t injured. He announced he was retiring instead, unaware of the implications it had.4

When asked a couple of days after his retirement announcement if he had played his last game, Griffey Sr. said, “At this point I would have to say no.” He added, “There is one more thing I want to do and you can sort of figure that out. If the Reds had released me, Seattle probably would have picked me up, but I don’t want to put any undue pressure on [Griffey Jr.]. He has a chance to win a batting title if he gets hot and he might not play as well if I was around him every day.”5

Seattle was interested in the possibility of the father-son tandem. Under major-league rules, however, Griffey Sr. was ineligible to play again in 1990 since he had voluntarily retired. The league and the Reds worked out an arrangement to allow him to rescind his retirement decision, and the Reds put him on waivers on August 24 to remove the obstacle.6

Griffey Sr. cleared waivers, and Seattle embraced the opportunity to add him. Seattle manager Jim Lefebvre didn’t view the addition of the elder Griffey as a publicity stunt. He said, “This is not a dog-and-pony show. We’re looking for a spark. We’ve worn out two saddles on [Griffey] Junior.”7 Seattle general manager Woody Woodward said, “Someone with his experience and winning attitude will be a big asset to our young club.”8

Lefebvre filled out the lineup card for the August 31 game against the Kansas City Royals with Griffey Sr. in left field, batting second, and his son in his usual center-field spot, batting third. They had finally realized their dream of being teammates. The senior Griffey said before the game, “I’m going to go out there and forget about who’s in center and just think about doing my job.” He added, “But when somebody hits to left-center and he hollers, ‘I’ve got it, Dad,’ well I’m sure it’s all going to go running through my mind.”9

Except for its historic significance involving the Griffeys, the game didn’t hold any particular meaning other than that the opponents were neck-and-neck in a battle for fifth place in the division. The Mariners’ 6-foot-10 left-hander Randy Johnson drew the starting assignment against Royals right-hander Storm Davis.

The Griffey duo wasted no time in teaming up against Davis, hitting back-to-back singles in the first inning and scoring two of the Mariners’ three runs in the inning. Alvin Davis and Edgar Martinez each had RBI singles.

Buhner’s double scored Davis in the fifth, and Jeff Schaefer accounted for the final Mariners run with a double that scored Davis again in the seventh inning. The final score was 5-2.

Each of the Griffeys went 1-for-4. Griffey Sr. made a spectacular play in the sixth inning when Jackson hit a shot down the left-field line that bounced off the wall. He made a quick retrieval and threw out Jackson trying to stretch the hit into a double.

“Actually, it seemed like a father-son game,” said Griffey Jr. “It just seemed like we were in the back yard playing catch.” His father was apparently a bit more anxious than his son. “My first time up there was like me being a rookie. I was especially nervous … more than I anticipated, this was special.”10

The Mariners won four of their first five games with the Griffey duo, with the father posting back-to-back three-hit games. He said, “There was never any doubt in my mind that I can still do the job. I usually wasn’t in the lineup long enough [with the Reds] to get three hits.”11 He was named AL Player of the Week for September 3-9, his first such honor in his 18-year career. The Griffeys hit back-to-back home runs on September 14.

Griffey Sr. played like he was his son’s age during his 21 games with the Mariners. He posted a batting line of .377/.443/.519, with three home runs and 18 RBIs. (During the same time period, Griffey Jr. appeared in 25 games and recorded a batting line of .266/.324/.457, four home runs, and 17 RBIs.) Pleased with Griffey Sr.’s effect on the team, the Mariners’ front office promised him a roster spot for 1991. He returned but wound up on the disabled list in early June, ending his career.

The Griffeys were on the same team again in 2000, when Griffey Jr. was traded by the Mariners to the Cincinnati Reds, where his father was in his fourth season as a coach. Griffey Jr. celebrated his father’s 50th birthday that season by hitting his 400th career home run.

Griffey Jr. went on to a Hall of Fame career of 22 seasons. He finished with 630 career home runs, fifth on the all-time list at the time of his retirement in 2010.

Tim Raines and his son Tim Raines Jr. joined the Griffeys in the record books when they played as teammates for Baltimore on October 3, 2001.

The author accessed Baseball-Reference.com for box scores/play-by-play information (baseball-reference.com/boxes/SEA/SEA199008310) and other data, as well as Retrosheet.org (retrosheet.org/boxesetc/1990/B08310SEA1990).

1 Hal McRae and his son Brian were teammates with the Kansas City Royals during spring training in 1986, but they never played together in a major-league game.