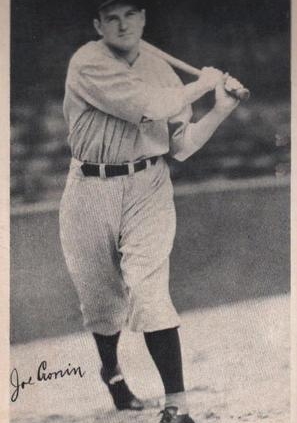 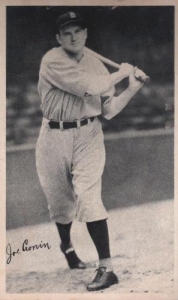 The Detroit Tigers hosted the visiting Red Sox at Briggs Stadium for a Friday afternoon game. The Red Sox had split a doubleheader in Cleveland the day before and were 6½ games out of first place. The Tigers had lost at home to the first-place Yankees, whom they trailed by 15 games. Boston was in third place and Detroit was in fifth.

Mickey Cochrane was manager for the Tigers. Joe Cronin was manager (and shortstop) for the Red Sox.

Cochrane had right-hander Elden Auker start the game.1 The Red Sox scored in the top of the first inning when left fielder Joe Vosmik hit a one-out double and, after a second out, Cronin doubled him home.

Future Hall of Famer Lefty Grove made his first start for the Red Sox since July 14. A walk and an error by Cronin saw two Tigers reach in the first, but neither scored. In the bottom of the second, though, Detroit put three runs across to take the lead. Center fielder Chet Morgan singled, moved to second and then third on groundouts, and scored on a wild pitch. Grove walked Auker. Left fielder Jo-Jo White laid down a bunt toward third base for a single. Shortstop Billy Rogell doubled and drove them both in for a 3-1 Detroit lead.

The Red Sox tied it, 3-3, in the fifth on a one-out Cramer single, a walk to Vosmik, a fly ball to deep left field by Jimmie Foxx on which both baserunners advanced a base, and then a single to left by Cronin, which drove them both home.

Detroit reasserted its lead – albeit by just one run – in the bottom of the fifth on another error by Cronin, a walk, a sacrifice bunt moving up the two runners, an intentional walk to Hank Greenberg, and then a fly to right field by Rudy York.

The Red Sox did little against Auker in the sixth or seventh, but the Tigers upped their lead with four more runs in the bottom of the seventh. Fritz Ostermueller had taken the mound to pitch for Boston. He got two outs right away, but second baseman Charlie Gehringer singled. After Gehringer moved up on a wild pitch, the Red Sox decided to walk Greenberg intentionally to fill the then-open base at first. Rudy York then walked, too, loading the bases. Morgan singled to right field, scoring Gehringer and Greenberg.

Joe Heving was brought it to try to get the third out, but Tigers right fielder Pete Fox doubled, driving in both York and Morgan. The next batter walked, but then Heving struck out Auker. The Tigers held an 8-3 lead, just six outs from a win.

They got three of those outs in the eighth, with only a base on balls to Bobby Doerr. Heving walked two in the bottom of the eighth, but neither scored.

Johnny Peacock led off the ninth for Boston by pinch-hitting for catcher Gene Desautels. He walked. Red Nonnenkamp pinch-hit for Heving. He singled to left field. Doc Cramer singled to short left, which loaded the bases.

Vosmik hit a fly ball to right-center and Peacock tagged and scored. Foxx grounded to Rogell, who mishandled the ball to load the bases. Joe Cronin hit two hard foul balls to the left side, and then hit one hard and fair, “spanked … into the right-field seats.”2 It was a grand slam. Just like that, the game was tied, 8-8.

Tommy Bridges relieved Auker. He gave up a double to right fielder Ben Chapman and, after Doerr popped up to short, a single to Jim Tabor. But Peacock, coming to bat for the second time in the inning, grounded out to second.

Jim Bagby Jr. became the fourth Boston pitcher. He retired the Tigers in order in the bottom of the ninth. The game – which had drawn 7,200 – went into extra innings.

Bagby was due up first in the 10th and was allowed to bat for himself. He struck out. But Doc Cramer doubled off the wall in left-center and so did Vosmik, off the same wall, Cramer scoring the go-ahead run.

Harry Eisenstat came in to relieve. He walked Foxx but got Cronin to ground into a 6-4-3 double play.

Bagby retired the Tigers in order in the bottom of the inning, and secured his ninth win of the season.

Cronin had committed two errors in the game, in the first and in the fifth, but by game’s end he had seven runs batted in on his first-inning RBI double, his two-run single in the fifth, and his grand slam in the top of the ninth.

The Boston Globe’s Mel Webb wrote, “The finish today boosted the morale of the club sky high, and the Sox dressing room when it was all over sounded like the quarters of a winning football team. Surely the boys were entitled to feel happy, for their victory was a full-team affair.”3

The very next day, Tigers owner Walter O. Briggs fired Mickey Cochrane as Tigers manager.4 It was said to have been something he’d been contemplating for a while, but deferred when the team went on an eight-game winning streak from July 24 to 30. Del Baker was named the new manager.5

4 “Cochrane came back as bench manager in 1938, but was ineffective outside his playing-field leadership and was fired on August 6, 1938. He was a great leader on the field, but cast as a ‘caged lion’ bench manager, he never managed again in the major leagues.” Charlie Bevis, “Mickey Cochrane,” SABR BioProject.