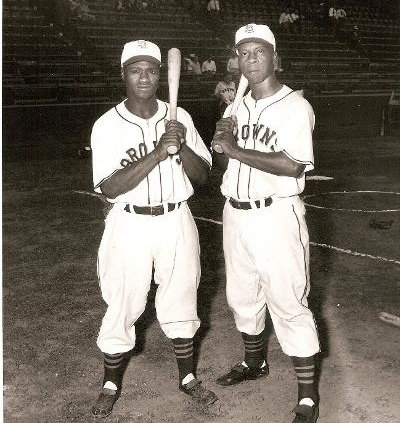 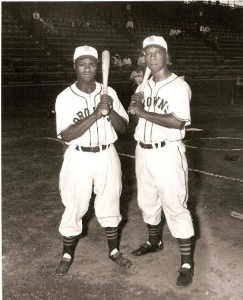 At a time when the St. Louis Browns were sorely lacking for talent and ticket sales, club executives saw a two-in-one solution to address both problems.

Three days after drawing a mere 478 fans to Sportsman’s Park for a Monday afternoon game against the Washington Senators,1 the Browns made a surprising announcement on July 17, 1947 – they had signed Hank Thompson and Willard Brown of the Negro American League’s Kansas City Monarchs and were bringing both stars directly to St. Louis to become the first modern team with multiple Black players.

“We have engaged these players because we think they will help our ballclub,” said Bill DeWitt, the general manager of the Southernmost AL team. “No one can deny that we were badly in need of help. Naturally we believe these colored boys will help us at the gate, especially in our home city of St. Louis, yet we think of them only secondarily as a gate attraction. We are not hiring these men because they are Negroes, but because we hope they can put more power in a club which has been last in American League club batting most of the season.”2

Thompson, a 21-year-old second baseman,3 was immediately penciled into the number 7 spot in the lineup that night but went 0-for-4 as the Browns were pummeled by the Philadelphia Athletics under the lights. Brown was scheduled as a pinch-hitter for pitcher Bud Swartz in the bottom of the ninth, but he was left on deck when catcher Les Moss flied out to center to end the game—a 16-2 victory for the Athletics.

“I was nervous all during the game,” said Thompson, who fouled out twice, flied out to right, and grounded out to second base while becoming the second Black player in the AL, 12 days after Larry Doby debuted for the Cleveland Indians. “The pitching doesn’t seem too tough, not any tougher than in our league [the Negro American League] if Dick Fowler is an example.”4

In addition to Thompson and Brown, St. Louis picked up an option to sign Piper Davis of the Birmingham Barons within 30 days if lead scout Jack Fournier decided Davis had major-league skills.5 The window expired without a contract, though Davis was later signed by the Red Sox but remained in the minor leagues. Two days later, the Browns added Chuck Harmon, a two-sport star from the University of Toledo and assigned him to Gloversville-Johnstown of the Canadian-American League. He later became the first Black player in Cincinnati Reds history.

To make room on the Browns roster for Thompson and Brown, St. Louis optioned Jerry Witte and Perry Currin to the minor leagues. Witte never again appeared in the majors,6 while the 18-year-old Currin drew a walk as a pinch-hitter in his final career plate appearance on September 17 in a 4-0 loss to Boston.7

“If the front office feels these players can help the ballclub then I will give them every chance. That applies to all players signed by the Browns,” said manager Muddy Ruel. “Both Thompson and Brown will be given every opportunity to make good with the Browns, and if they have the ability, they will be in the lineup playing regular.”8

The moves by the Browns caught many by surprise, even though the club’s minor-league system was barren of major-league-caliber players. St. Louis had a checkered past of racial equality, including a large-scale race riot that occurred in the suburb of East St. Louis, Illinois, in July 1917, and became the last major-league city to desegregate its ballpark, just three years earlier in 1944. During an early-season series in 1947, it was rumored that some St. Louis Cardinals players planned to walk out instead of play Jackie Robinson and the Brooklyn Dodgers, but all involved denied the reports. The Cardinals did not integrate their roster until first baseman Tom Alston debuted in April 1954.

For Thompson’s debut, the paid attendance of 3,648 was marginally higher than the series opener, which drew 3,503 fans,9 but the Thursday night crowd didn’t get to see much in the way of a competitive ballgame.

In the third, Philadelphia’s Barney McCosky reached on Thompson’s error and moved around the bases on Eddie Joost’s sacrifice and George Binks’s fly out before scoring on a squeeze bunt by Ferris Fain. St. Louis tied the game in the bottom of the inning when Fred Sanford, Billy Hitchcock, and Vern Stephens put together three singles, and Hitchcock scored on Jeff Heath’s fly ball for a 2-1 advantage.

In the fifth, Philadelphia regained the lead for good after McCosky doubled and Fain homered to the roof of the pavilion, and in the sixth, Sanford faltered with two outs to allow the Athletics to build a lead. Hank Majeski singled, Fowler reached on an error by third baseman Hitchcock, and McCosky walked to load the bases. Joost hit a two-run single, and Binks followed with an RBI single and a 6-2 lead.

Sam Zoldak relieved for the seventh and escaped unscathed after allowing a pair of hits in his first relief appearance since July 12.10 To lead off the eighth, McCosky reached on a bunt down the third-base line and took second on a bad throw. After Joost’s sacrifice, Binks singled in another run for a 7-2 advantage.

Fourteen Athletics strode to the plate in the ninth. Philadelphia’s offense recorded five hits and drew five walks during the rally—which came against Zoldak and Swartz—and took advantage of an error by shortstop Stephens to post nine runs and a 16-2 lead. Zoldak allowed a triple to Sam Chapman and doubles to Buddy Rosar and Majeski.11 Philadelphia scored its most runs since 1941 and won by its widest margin since 1937.12 It was the second game of the season that St. Louis had surrendered 16 runs.13

Philadelphia—in 84-year-old Connie Mack’s 47th season at the helm—took three of the four games in the series, improved to 41-42, and remained fourth in the standings (the A’s finished the season in fifth place with a 78-76 record). St. Louis fell to 28-51, falling further into the league’s cellar, where the Browns remained the rest of the season on the way to a 59-95 finish.14

Yet optimism remained high in mid-July.

Thompson drew a comparison to Frankie Frisch from Dizzy Dean, who at the time was a broadcaster for the Browns,15 and Bob Feller said Thompson was the best opposing player his barnstorming team faced in 1946.16

“I sincerely hope that Thompson and Brown will be able to do as good in the majors as they did in the Negro leagues,” wrote Robinson, a former teammate of both Thompson and Brown who broke the modern color line on Opening Day of the 1947 season. “Although they’ll find the competition tougher, I think they are both smart enough to learn the ropes and solve the many problems they will encounter out there on the playing field.”17

In the four days leading up to the signing, both players were doing great things for the Monarchs. Thompson went 9-for-19 with five extra-base hits and 12 runs in five games for Kansas City, which won two of three from the Birmingham Black Barons and easily won exhibitions against the Lincoln (Nebraska) Sandy’s and the Fort Dodge (Iowa) Tobin Packers. Brown hit three home runs in the 21-0 win over Fort Dodge18 and secured the game-winning hit in the final game of the series with the Barons. The Monarchs won their first game without Thompson and Brown, beating the Industrial League All-Stars 14-5 in Madison, Wisconsin.19

The Browns initially were equally as lucky.

St. Louis won the next night to open a series with the Boston Red Sox in front of 6,045 fans and continued to win two of the next three games, winning a series of four or more games for the first time since taking four of six games from the Yankees in September 1945.20 But the Browns slowed down, losing the next five games and later losing seven in a row in early August.

Brown, who played for the Monarchs for 10 seasons and “never dreamed I’d be this lucky,”21 made his debut as the starting center fielder on July 19 in a 1-0 loss to Boston. In the first game of a doubleheader on July 20, Thompson and Brown became the first modern Black teammates to appear in the same game.

Thompson appeared in 27 games for the Browns and hit .256. His best showing came in the second game of a doubleheader against Cleveland on August 9, when he went 3-for-3 and drew a pair of walks. He was released, along with Brown22 on August 23, and both immediately re-signed with the Monarchs. While the duo was with St. Louis, the Browns went 14-25.

Though his tenure with the Browns didn’t last, Thompson made it back to the majors in 1949 after 68 games with the Jersey City Giants of the International League. He became the first Black player in the history of the New York Giants on July 8, fulfilling a prediction Robinson had made after Thompson’s release from the Browns: “Maybe he just needs a year of seasoning in the minors.”23

This article was copy-edited by Len Levin.

1 It was the first of four home games for the Browns in 1947 that had a reported attendance of fewer than 1,000 fans. It was the lowest attendance figure reported since 359 fans showed up when the Browns hosted the Red Sox on May 13, 1943. Among American League teams, St. Louis finished last in attendance in 20 of the 22 seasons between 1926 and 1947.

3 There was a hole at second base the Browns had been trying to fill since Opening Day starter Johnny Berardino suffered a fractured wrist on June 17. Billy Hitchcock and Rusty Peters played second before Thompson arrived.

5 The Browns took a serious look at the versatile Davis, even requesting that the Barons play him exclusively at first base, though Davis typically played at second base.

6 Witte, despite being 31 years old, was a promising player after slugging 46 home runs for the Triple-A Toledo Mud Hens during the 1946 campaign to win American Association MVP honors. Despite adding another 149 homers over the next four seasons—including 50 for the Double-A Dallas Eagles in 1948—Witte was never called back up to the majors.

9 Because Thompson and Brown were signed the same day as the game, it likely prevented many who otherwise would have attended from having enough time to make plans to come to Sportsman’s Park.

10 Zoldak started three days prior to facing the Athletics and beat the Washington Senators in a complete-game effort.

14 St. Louis was 27½ games behind the New York Yankees after the loss to Philadelphia and finished the season 38 games off the pace.

18 It was reported by the Fort Dodge (Kansas) Messenger & Chronicle that Brown was rumored to soon be headed to the Browns. Chico Renfroe was also said to be a candidate to jump to the major leagues, but Thompson was not mentioned. “Monarchs Easy Winners; Give Crowd Good Show,” Fort Dodge Messenger & Chronicle, July 17, 1947: 21.