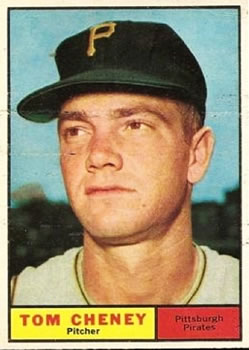 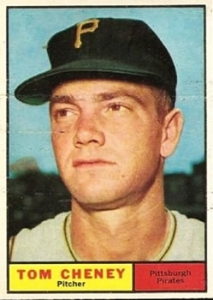 On Memorial Day 1960, the Pittsburgh Pirates had squeezed past the San Francisco Giants by a half-game to take over first place in the National League. And by mid-July the Giants had faded; the Pirates, forging on and 18 games over .500, held a three-game lead over the Milwaukee Braves.

Pirate fans were ecstatic. Their Bucs had lost 92 games as recently as 1957, then righted ship to finish in the first division in 1958 and 1959. Thus enticed, the faithful were looking for a pennant from the Pirates in 1960.1

Manager Fred Hutchinson’s sixth-place Cincinnati Reds were visiting Forbes Field for a four-game Friday-Sunday series with the Pirates commencing July 15. The Reds had prevailed on Friday night, with Jim O’Toole besting Bob Friend by a 4-1 score. The Pirates retaliated on Saturday afternoon when Dick Stuart broke up a 5-5 game, clouting a solo home run in the bottom of the ninth inning off reliever Jim Brosnan.  In the first game of the doubleheader on Sunday, July 17, former Pirate Bob Purkey and the Bucs’ Vern Law matched up; by the top of the seventh inning the Reds had battered Law and Fred Green to a 6-0 lead. Pittsburgh surged back in the eighth to make it close at 6-5 but lost. The league leaders needed to win the second game to split the series and, with the Braves lurking and a four-city road trip starting in Los Angeles beginning the next day, keep momentum.

On paper, the chances didn’t look that good. Pirates manager Danny Murtaugh tabbed 25-year-old righty Tom Cheney to start. Cheney had been acquired during the 1959-60 offseason in a trade with the Cardinals and had started the season with the Columbus Jets, Pittsburgh’s Triple-A affiliate in the International League. There he was an uninspiring 4-8 in 15 starts when the Pirates summoned him in early July, and he was 1-1 in two starts as he got the ball.2

His opponent was grizzled veteran Don Newcombe, winner to that point of 146 games over 289 starts in a career that stretched back to the 1949 Brooklyn Dodgers. The Dodgers, now in Los Angeles, had parted ways with Big (6-foot-4, 220 pounds) Newk in June 1958 in a trade with the Reds. At 34, the right-hander was no longer the pitcher who had won 27 games for Brooklyn four years before, but despite his 3-6 record the former Rookie of the Year and Cy Young Award winner was still a formidable and combative presence on the mound.

A standing-room-only3 crowd of 36,290 had swarmed Forbes Field only to see the Pirates’ late rally fall short in the first game. They wanted more from their pace-setting club, especially against a second-division opponent.

Cheney didn’t give them a lot of confidence in the first inning. He retired Eddie Kasko on a groundball to shortstop, but then walked Vada Pinson. With former Pirate Gus Bell batting, Pinson took off for second base, testing Pirates third-string catcher Bob Oldis, who was making his first start of the season in relief of Hal Smith and workhorse Smoky Burgess.4 Oldis was up to the task; his throw nailed Pinson for the second out. It likely saved a run, since Bell delivered a single that the speedy Pinson could have turned into a run had he been on second base.5 Cheney finished off Wally Post with a called third strike to close the half-inning.

But then came what the Pittsburgh Post-Gazette styled “The Great Sweatshirt Incident,” under the creative subhead, “Sleeve Flaps, Don Yaps.”6 As Pirates leadoff hitter Bill Virdon prepared to step in against Newcombe for the bottom of the first inning, Murtaugh strolled out with him and protested to home-plate umpire Dusty Boggess that the hulking righty’s uniform didn’t conform to major-league rules. “Newcomb’s left [sweatshirt] sleeve wasn’t as long as the right one. Or maybe his right one wasn’t as short as the left one.”7 According to Murtaugh and the Pirates, the long, loose, right sleeve on the sweatshirt Newcombe wore under his uniform jersey flapped with the delivery of each pitch, distracting batters. Boggess agreed that the rule book required sleeves to be of approximately even length and directed Newcombe to change shirts before the game proceeded further.8

Faced with this edict, Newcombe grudgingly went to the Reds’ dugout to comply. As he trudged back to the mound wearing a new, complying sweatshirt under his uniform jersey, he asked Boggess, “Suppose a one-arm pitcher like Pete Gray9 comes out; what do you do about the shirt sleeve?” Newcombe told writers after the game that Boggess told him, “Go on out and pitch the blanketey-blank game,” to which Newcomb replied, “You umpire the blanketey-blank game.” They barked back and forth to the derision of the Pittsburgh crowd as Newcomb “stood his ground,” but an ejection was foreordained. Big Newk and his new sweatshirt were gone before he threw an official pitch.10

Hutchinson was suddenly forced to use an emergency starter. He settled on right-hander Cal McLish, who had lasted into only the fourth inning in his last start three weeks before. Boggess allowed him the regulation 15 warmup pitches to get ready. From the Pirates’ rule challenge through the Newcombe-Boggess brouhaha and completion of McLish’s warmup took 20 minutes as “the fans fidgeted and sweltered in the hot sun.”11

Cheney went back to work with the 1-0 lead and didn’t yield another Cincinnati hit until Pinson singled with one out in the sixth; Bell then helpfully rolled into a double play. By that time the Pirates had padded their lead to 3-0 on a two-run double by Don Hoak in the fifth inning.

Ed Bailey authored another harmless single in the Reds’ seventh; as Cheney rolled along, he aided his own cause in the eighth inning with an RBI double off Bob Grim, who had replaced McLish after seven innings. Virdon drove Cheney in with a single, increasing the lead to a comfortable 5-0.

Although Bell touched him for a double with one out in the ninth inning, Cheney made quick work of Post and Frank Robinson to put the final touches on a four-hit shutout, tied up in a neat 2 hours and 20 minutes despite the Newcombe sweatshirt delay.

Cheney went on to make eight more appearances in the 1960 regular season, including five starts, and finished with a 2-2 record. The Pirates kept their momentum down the stretch, never dropped out of first place, and won the National League pennant by seven games over Milwaukee. Cheney pitched four innings of mop-up relief in a memorable World Series against the Yankees, earning a ring.

He stuck with the Pirates for one early-season appearance in 1961 but was sent back to Columbus. On June 29, 1961, Pittsburgh traded Cheney to the Washington Senators for left-handed pitcher Tom Sturdivant. Cheney finished out his major-league career there, winning 17 games and losing 25 over five seasons.

Newcombe made two more starts for Cincinnati before the club sold his contract to the Cleveland Indians on July 29.14 He finished the season with the fourth-place Indians, posting a 4.33 ERA in 20 appearances including two starts. Cleveland released him during 1961 spring training. Out of the majors at age 35 but not yet ready to hang things up, Newcombe pitched in the Pacific Coast League in 1961 and in Japan in 1962 before retiring.

In addition to the sources cited in the Notes, I used the Baseball-Reference.com and Retrosheet.org websites for player, team, and game logs and the box scores for this game:

2 Cheney went seven innings on the road against Cincinnati on July 6 to earn his first major-league victory, 5-2.

4 Burgess didn’t start either game of the July 17 doubleheader due to “slight soreness in his right knee” sustained in a play at the plate as a baserunner the day before. Hernon. The Pirates carried three catchers in 1960. Burgess played in 89 games, Hal Smith in 71, and Oldis in 22. Smith caught the first game of the doubleheader. Burgess pinch-hit for him in the eighth inning, and Oldis caught the ninth. Oldis also caught the second game, one of only three he started in 1960.

8 The rule, now numbered No. 3.03(e), states: “Sleeve lengths may vary for individual players, but the sleeves of each individual player shall be approximately the same length, and no player shall wear ragged, frayed, or slit sleeves.” MLB.com/documents/2018/Official Baseball Rules, accessed August 18, 2020.

9 Pete Gray did indeed have only one arm, but he wasn’t a pitcher. He played in 77 games as an outfielder for the 1945 St. Louis Browns.

10Biederman. According to Retrosheet.org, this was the 14th of 15 times Newcombe was ejected over his career. His first one was in 1951, his third season in the majors, and the last one later in 1960. This was only time Boggess booted him.

12 Between games of the doubleheader, Hutchinson had complained about the “rock-like” infield at Forbes Field, calling it “a disgrace to baseball,” and adding, “Why, I’ve seen and played on sandlot infields that were ten times better than this one you have here.” Al Abrams, Sidelight on Sports column, “Hutch Blasts FF Infield,” Pittsburgh Post-Gazette, July 18, 1960: 18. See also, “alabaster blast” in compendium of Pirates broadcaster Bob Prince’s “Gunnerisms,” Baseball Voice of the Week – OOTP blog, forums.ootpdevelopments.com/showthread.php?t=115057, accessed August 19, 2020.