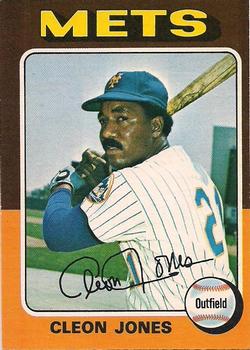 Muhammad Ali won four heavyweight championship bouts including the “Thrilla in Manila” against Joe Frazier; Carlton Fisk jumped into sports history with his game-winning home run clearing Fenway Park’s left-field wall in the bottom of the 12th inning in Game Six of the 1975 World Series; and a young, wealthy oceanographer with cutting-edge equipment, a crusty fisherman with a few decades of experience, and a small-town sheriff with aquaphobia tracked a great white shark menacing the beaches of Amity, New York, in Jaws. It was the sheriff of this Long Island town who killed the beast after shoving an air tank in its mouth, climbing to the top of their sinking boat, and shooting his rifle until he hit the tank, which exploded the shark.

Those who went to Shea Stadium for the Mets-Braves game on July 18, 1975, or watched it on television saw another grand clash. It happened between Cleon Jones and Mets skipper Yogi Berra. Not since President Truman fired General MacArthur had there been a boss-underling conflict of similar proportions.

It was the last game the center fielder played for the Mets.

Braves righty Carl Morton kept the Mets in blanks through four innings; Jon Matlack did the same but the left-hander’s scoreless streak ended when Atlanta’s bats racked up three runs in the top of the fifth inning. All were unearned.

Rod Gilbreath started the offensive with an infield single and a stolen base. Matlack got his first out with Rowland Office’s 1-3 grounder. There seemed to be an opportunity for Gilbreath to take third when Carl Morton grounded to Mike Phillips, but the Mets shortstop tossed the ball to third baseman Joe Torre instead of going for a 6-3 groundout. It looked futile for Gilbreath until Torre dropped the throw.

With runners at the corners, bleakness hovered over the Mets faithful with the speedy Ralph Garr at the plate — NL leader in triples and .278 average for the 1975 season — and the situation got bleaker when Matlack’s wild pitch moved Morton to second.

Darrell Evans scored Perez with a two-out double; Williams ended the Braves’ fifth with a grounder to third.

The Mets notched a run in the bottom of the sixth. Kingman got his second infield single of the night and reached third base when Torre and Phillips each grounded out to Atlanta third baseman Evans. Jerry Grote’s “high bouncer” single to Morton scored Kingman.1 Pinch-hitting for Matlack, John Milner singled and left the field for pinch-runner Gene Clines.

Atlanta manager Clyde King selected lefty Tom House for relief; Berra sent right-handed Jesús Alou to bat for lefty Del Unser. A .280 career hitter, Alou had 102 at-bats in 62 games for the Mets in 1975. He struck out five times; this was one of those instances.

Millan began the bottom of the seventh with a fly out to center field; Jones batted for Kranepool and lined out to substitute shortstop Larvell Blanks for the second out; and Rusty Staub’s grounder to second ended the inning. Jones’s liner was not an abnormal happening and neither was his reaction — throwing his helmet in frustration. But what followed broke the unwritten, unspoken protocol that a player follows the dictates of managers — Jones refused to play. A fracas percolated to a potential boil between Berra and his star outfielder when they “exchanged shouts.”2 Jones punctuated his outburst when he “pulled some towels from a rack and stormed off into the Mets’ clubhouse.”3

He did not return.

For Berra, there was more than disrespect at stake. It was a practical matter. “I told him to go out and play left field and he wouldn’t go,” said the Mets skipper. “I couldn’t wait all day for him to go, so I sent someone else out. It made me change my whole lineup because I had to use another player. It was the most embarrassing thing that’s happened to me since I became manager [in 1972].”4

The Braves nicked Mets reliever Ken Sanders for a run in the top of the eighth. The right-hander gave up a single to Perez and a walk to Evans. Both moved forward on Earl Williams’s sacrifice. Sanders loaded the bases with an intentional pass to Cito Gaston; Vic Correll’s fly ball to Alou scored Perez; and the rally ended with Blanks’s lineout to Sanders.

In the Mets’ half of the eighth, right-hander Elías Sosa relieved House after Clines banged a two-out single. John Stearns grounded into a force out, ending the inning.

The New York nine climbed back with a couple of runs in the bottom of the ninth. Felix Millan doubled and went to third base on Wayne Garrett’s grounder to second. Staub’s single scored him. Max León went to the Shea Stadium pitching mound and the righty put the Braves one out closer to victory with Kingman’s fly to Garr in left. Torre singled, putting runners on first and second. Staub scored on pinch-hitter Jack Heidemann’s single, but the Mets’ hopes ended on Grote’s grounder to second.

Jones’s action capped a period of unhappiness for the outfielder, who caught the last out for the 1969 World Series champions. “I’ve been teed off for weeks,” said Jones. “What happened last night was the last straw. What would be my first choice? To play left field for the Mets, regularly, but it won’t happen.”6

Berra used Jones in in 21 of the team’s 87 games; Jones hit .240 (12 for 50). But their rift was sourced in physical liability, not baseball strategy: Jones had an operation the previous October to remove cartilage from his left knee.7 He felt the knee had healed; Berra thought otherwise.8

Further, Jones’s dispute with Berra was not the only controversy for him. In May police arrested the center fielder for indecent exposure9 with a woman in St. Petersburg, Florida. They were naked in a car. The Mets fined him $2,000; Florida’s state attorney decided not to go through with the case.10

Jones had signed with the Mets in February to a 1975 contract.11 The team released him on July 26. It was his idea. So an upcoming arbitration on his grievance was moot, according to the team statement: “Regardless of the result, the problem would not be resolved. We have no desire to hurt anyone. The suspension is being lifted, and Cleon will be paid in full. We feel another club will sign him, and we wish him well.”12

The July 18 game was Jones’s last for 1975, but he signed with the White Sox the following April for the ’76 season after hitting .607 in nine spring-training games.13 His stay amounted to 12 games played and a .200 average. Chicago released him a month after signing him,14 marking the end of his baseball career.