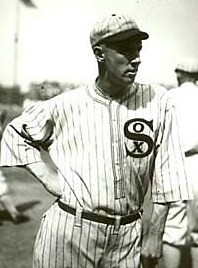 The Red Sox arrived in Chicago on July 19 trailing the White Sox by 2½ games. Boston had won the pennant in 1915 and 1916, and captured the World Series championship both years. With nearly all of its championship roster intact, Boston had its sights set on a third flag.

In 1916 Boston had won 14 of 22 contests against the White Sox, and that success was a big reason the Red Sox won the pennant by two games over second-place Chicago. No wonder the Chicago Tribune called these five games in July 1917 “supremely critical.”1 If the White Sox hoped to dethrone Boston, beating them head-to-head was a must.

Coming into this series, Chicago held a slight edge in the rivalry. It won two of three when the Red Sox visited Comiskey Park in May, and in June the teams split a four-game series played in Boston.

As recently as July 15, the Red Sox sat atop the AL, if only by the slim margin of three percentage points. The White Sox responded by winning their next four to surge ahead by 2½ games before this showdown at Comiskey Park. In the series opener, Boston left-hander Babe Ruth beat Chicago 3-2, but the next day the White Sox prevailed, 5-2. On Saturday, in front of a crowd estimated at 22,000, the teams played to a 15-inning tie.

Saturday’s game had been intense. Pop bottles flew from the left-field bleachers in the 10th inning when Chicago’s Buck Weaver, and Boston’s Jimmy Walsh mixed it up after Weaver was tagged out at third.2 Boston thought it had victory in hand when it scored in the 14th, but Risberg tripled and scored in the bottom of the frame to knot the score at 5-5 before darkness ended play an inning later.

Since Sunday was the one day many working-class fans were not on the job, owner Charles Comiskey anticipated 35,000 or more at the turnstiles. He instructed the grounds crew to rope off the far reaches of the outfield, anticipating that the area would be occupied by an overflowing crowd for the fourth game of the series. Much to Comiskey’s dismay, a rainstorm rumbled through parts of Chicago about an hour before game-time, holding the attendance to 25,000. Only a brief rain fell at the ballpark, and since the infield had been tarped, playing conditions were unaffected.

Neither pitcher allowed a run in the first inning, although the White Sox collected three hits off Mays. A Boston double play ended the inning before any Chicago runners crossed the plate.

Risberg’s daring second-inning baserunning produced Chicago’s first run. After Chick Gandil was retired for the first out, Risberg lined a ball down the left-field line. He raced past first and turned for second base, arriving safely just ahead of a strong throw from left fielder Duffy Lewis. Ray Schalk tapped a perfectly placed bunt down the third-base line, and made it safely to first as Risberg sped to third.

With runners at the corners, Russell lofted a foul fly ball just beyond third base, and near the stands. It was caught by third baseman Larry Gardner, and as soon as the ball hit Gardner’s glove, Risberg surprised everyone in the park by dashing for home.

Catcher Sam Agnew blocked the plate; Gardner fired the ball to Agnew’s waiting glove, and Agnew tagged Risberg two feet short of home. Umpire Silk O’Loughlin signaled an out, but reversed his call when Risberg bowled over Agnew and the ball squirted from his mitt. Agnew limped off the field in pain, but returned to his position after five minutes to resume play.

Agnew got a measure of redemption in the fifth inning. Chicago’s Nemo Leibold led off with a double and was sacrificed to third. Eddie Collins fouled out to Gardner, leaving Leibold at third base. With Shoeless Joe Jackson batting, Leibold broke for home plate.

The Boston Herald described what happened next: “Agnew made a fine play by taking the wild pitch and diving full length for the runner. [He] put the ball on Leibold’s foot an inch or two before it reached the plate.”3 Agnew’s defensive effort kept Boston within one run – but not for long.

After two outs in the sixth, Gandil collected the second of his three singles. With Risberg batting, Gandil stole second, executing a “swell hook slide”4 to get under the tag. Risberg looped a single to left, plating Gandil and making it 2-0 in favor of the White Sox.

Neither team scored over the last three innings, and the White Sox celebrated a 2-0 victory. Russell pitched a complete game, raising his record to 9-4. He surrendered just four singles – one hit in four different innings – without issuing a base on balls. According to Chicago Tribune sportswriter James Crusinberry, “[Russell] seemed to have his curve ball bending in form and the old high one was hopping.”5 The Boston Herald credited Russell with “a million dollars’ worth of stuff.”6

Perhaps more importantly, since it was “generally believed he was suffering from a sore arm,”7 Russell appeared to be throwing without pain. Twice more in 1917 – on August 1, and August 21 – Russell shut out Boston on his way to a 15-5 record.

Mays had a poor outing, and his record fell to 11-5. Chicago tagged him for 11 hits in seven innings, and could have scored more than two runs if not for Boston’s solid defense. Mays completed the season 22-9 with a team-best 1.74 ERA.

Risberg shined brightly in the Sunday game. He handled 10 chances in the field without an error, and accounted for both Chicago runs – crashing through the catcher to score the first, and driving home the second. His 2-for-4 day raised his average to .225.

Risberg played 149 games his first year with Chicago, hitting .203. His 20 doubles tied Jackson for the team lead, and Risberg added eight triples, one home run, 59 runs scored, and 43 runs batted in. During a 33-game stretch from June 27 through July 27 – starting with a 4-for-4 game against Detroit – Risberg revealed his batting upside by raising his average from .180 to .228, collecting 16 RBIs, and pounding five doubles and four triples. He tailed off in August and September, and lost his starting position late in the season.

In a mid-September interview, Chicago manager Pants Rowland said of Risberg, “He is a fighter from the ground up, and he never admits defeat until the last man is out.”8 Rowland acknowledged Risberg’s offensive shortcomings, but called him “pepper personified,” and credited him with instilling confidence in his teammates by his play at shortstop.9

The White Sox beat the Red Sox again the next day in the makeup of an earlier rainout, and sent Boston on its way trailing by 4½ games. Chicago had performed well in this key confrontation, winning three of the four completed games.

But the pennant race was not over. When the teams met at Fenway Park for four games beginning July 30, the Red Sox won the first two games to capture first place for one day by six percentage points.

Boston again appeared atop the standings – by one percentage point – on August 17, but the next day Chicago began a stretch of games – extending through September 18 – in which it won 25 of 29. Chicago’s dizzying .862 pace left Boston eight games behind, and left little doubt as to which team would be the 1917 American League champion. Chicago ended the season 100-54 (with two ties), nine games ahead of Boston, and 12 games in front of third-place Cleveland.

Chicago defeated the National League’s New York Giants in six games in the World Series, collecting its first championship since the 1906 Hitless Wonders came out on top. Neither Risberg nor Russell made much of an impact in the fall classic.

Risberg was used sparingly in the World Series; batting twice, and garnering one hit and one RBI. Russell started Game Five, but was removed after yielding a walk and two doubles to the first three New York batters. His futility was forgotten when the White Sox rallied to win, 8-5.

The author consulted Baseball-Reference and Retrosheet.org for box scores and other pertinent data, and obtained descriptions of the play-by-play from newspapers listed in the notes.