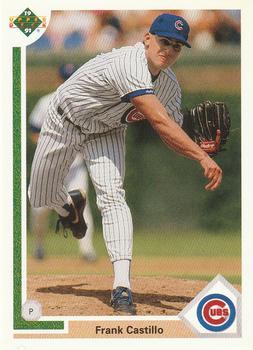 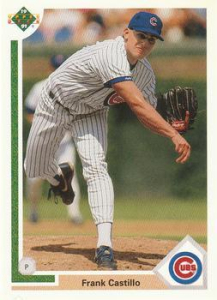 Like thousands of youth pitchers, Frank Castillo dreamed of winning a game in the major leagues. He was drafted out of Eastwood High School in El Paso, Texas, in the sixth round of the June 1987 amateur draft by the Chicago Cubs and progressed quickly through the minors.

After reaching Triple-A Iowa to start the 1991 season, Castillo suffered a broken thumb on Opening Day1 but recovered to post a 3-1 record with a 2.52 ERA in four starts, leading to a call-up to the Cubs in June.2

Castillo made his major-league debut on June 27, 1991, against the Pittsburgh Pirates at Three Rivers Stadium. The 22-year-old right-hander took a three-hit shutout into the ninth inning but was relieved after allowing consecutive singles to start the inning. With Castillo’s father, Joe, watching from his seat behind the dugout,3 the Cubs bullpen coughed up four runs, giving Pittsburgh—in first place in the National League East and headed to the second of three consecutive division titles—a dramatic 4-3 win and depriving Castillo of a victory.

Just four days later, Castillo faced the Pirates again, this time at Wrigley Field. He struck out seven but allowed 10 hits and five runs in seven innings. This time, his teammates rallied to tie and won 6-5 in 13 innings.

On July 5, again on just three days’ rest, Castillo took on the St. Louis Cardinals at Busch Stadium in the opener of a three-game series. Because the local cable system in El Paso did not carry WGN-TV, the Cubs’ superstation,4 Joe Castillo drove more than 600 miles to Dallas to visit his sister to watch his son pitch on TV.5

St. Louis entered with a 43-35 record, in third place in the NL East, five games behind Pittsburgh. Chicago was 7½ games behind the Cardinals in fourth place with a 36-43 mark.

As the Friday night crowd of 49,251—the largest of the season at Busch Stadium6—settled into their seats, the Cubs struck quickly in the top of the first.

On the game’s second pitch, Chico Walker ripped a ball in the left-center gap that bounced into the stands for a double.7 With one out, Ryne Sandberg—back in the lineup after leaving a game three days earlier with a bruised hand—grounded to Todd Zeile at third base.

Zeile, in his first full season at third after converting from catcher, threw low to first; the ball skipped past Pedro Guerrero.8 “My arm is kind of dead,” Zeile said later. “I just aimed it a little bit and it didn’t get there.”9

Walker raced around third and Guerrero’s throw to the plate was offline, bouncing off Walker’s leg and rolling into the Cardinals dugout. Home-plate umpire Brian Gorman waved home Sandberg, who had reached third, to give the Cubs a 2-0 lead. Despite an NL-low 44 errors in its first 78 games, St. Louis had committed two on one play in the first inning.

Castillo allowed just an Ozzie Smith single in the first three innings but ran into trouble in the fourth. He walked Milt Thompson and Smith to start the inning before Guerrero’s one-out single loaded the bases. Félix José’s grounder to first baseman Mark Grace forced Guerrero at second as Thompson scored to cut the Cubs’ lead to 2-1. Zeile forced José at second to end the threat.

The Cubs got the run back in the top of the fifth. Walker walked with one out; with two outs he stole second and advanced to third on a throwing error by catcher Rich Gedman. Sandberg’s grounder was just beyond the reach of second baseman José Oquendo’s dive for a single, scoring Walker for a 3-1 lead.

Chicago threatened again in the sixth when Rick Wilkins singled with one out and was balked to second.10 After Doug Dascenzo was intentionally walked, Castillo flied to left to end the inning.

After pitching a perfect fifth, Castillo faced his biggest challenge in the sixth. Thompson, who entered the game 11-for-25 against the Cubs in 1991, led off with a single. After a single by Smith, both runners advanced on Ray Lankford’s sacrifice.

Guerrero smashed a liner down the line past third, but Walker lunged to his right and made a backhanded snare to save a double and two runs. José ended the inning with a pop to shortstop.

“Pete [Guerrero] hit that ball hard,” said St. Louis manager Joe Torre. “That was the big play. They didn’t give up a whole lot.”11

Torre continued, “I think it would have been fair [if he hadn’t caught it]. It was just a great play. If he doesn’t catch it the score is tied and who knows.”12

“[Castillo] showed a lot of poise pitching out of the jam,” Chicago manager Jim Essian said. “Walker made a great play.”13

After survived the sixth inning with the lead, the Cubs gave Castillo breathing room with two insurance runs in the seventh against Cardinals reliever Cris Carpenter. With one out, Grace doubled over first base and Sandberg and Andre Dawson walked to load the bases.

George Bell, who had signed as a free agent the previous December after nine seasons with the Toronto Blue Jays, fouled out to first for the second out. But Wilkins looped a single into left field to score Grace and Sandberg and put Chicago up 5-1.

The rookie’s performance—six hits, two walks, and four strikeouts on 115 pitches—drew praise from both sides.

“He showed a lot of poise for a 22-year-old recently called up from Iowa,” said his manager Essian. “I never really had to consider removing him from the game.”15

“Castillo was tough, and they made some great plays behind him,” Thompson said. “We just couldn’t seem to hit that kid.”16

“The kid frustrated us. It was the first time we’ve seen him,” offered Torre.17

When the clubhouse phone rang, veteran reliever Dave Smith joked that the president was calling to offer congratulations,18 but Castillo was more concerned about another phone call.

“This is just an awesome experience. I’ve been dreaming about this since I was eight years old in the Little League. My dad was my coach. He helped me a lot. I can’t wait to call him. He saw the game and that makes me happy.”19

He credited his performance to lessons from his previous outing. “The second game that I pitched, I learned a lot. Today I kind of utilized what I learned, (to) try to take something off my fastball when I’m behind in the count. My changeup’s my main pitch.”20

Three hours after the game, Castillo was still struggling to express his feelings: “It’s awesome. I can’t put it in words.”21

Castillo’s best performance as a big leaguer came on September 25, 1995. With his wife in the stands at Wrigley Field, he took on the Cardinals and was one strike away from the first Cubs no-hitter since Milt Pappas’s controversial gem22 against San Diego on September 2, 1972, but Bernard Gilkey tripled to right-center on a liner that Sammy Sosa dived for but could not catch.23

“It was one of those pitches that as soon as I threw it, I wanted it back,” Castillo said. “Sammy made a great effort. He almost made it.”24

After leading the National League with 16 losses in 1996, Castillo was traded by the Cubs to the Colorado Rockies on July 15, 1997.25 He bounced around the majors the next few seasons, landing in Detroit, Toronto, and Boston before ending his career with one start for the 2005 Florida Marlins. He finished with a career record of 82-104 with a 4.56 ERA in 297 games (268 starts).

Castillo died tragically on July 28, 2013, at the age of 44 when he drowned while swimming with his family at Bartlett Lake near Phoenix, Arizona.26

The author and his wife attended this game and the next day’s game just four weeks after their wedding.

The author also consulted the WGN-TV broadcast of the game, which he has on compact disc.

7 A part-time starter, Walker was 12-for 23-as a pinch-hitter entering this game. Bagnato.

8 The throw was Zeile’s ninth error of the year and his third consecutive game with an error. He would also commit one in the next game. He finished the season with 25 errors in 154 games.

14 According to the WGN telecast, Smith entered the game batting .342 (52-for-152) batting left-handed as he was against Castillo.

22 With the Cubs leading 8-0, Pappas was one out away from a perfect game. With a 1-and-2 count on pinch-hitter Larry Stahl, he threw three consecutive close pitches that were called balls by umpire Bruce Froemming. Pappas was enraged at not getting the final strike call but retired pinch-hitter Garry Jestadt on a pop to second base to finish with a no-hitter. Highlights of the game can be seen at https://www.youtube.com/watch?v=hv3I-zUODC4.

23 The triple resulted from Sosa’s diving attempt to make the catch and end the no-hitter. Otherwise, it would have been a routine single. Highlights of the game can be seen at https://www.youtube.com/watch?v=MLN9Uj04HXk.

25 For minor leaguer Matt Pool, who never made it past Double A.