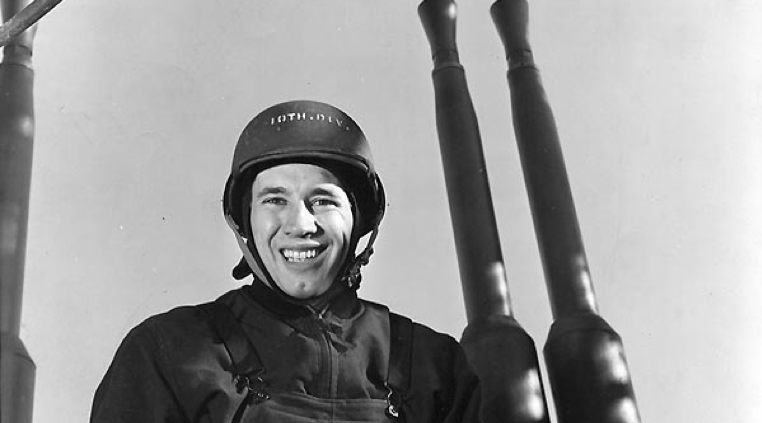 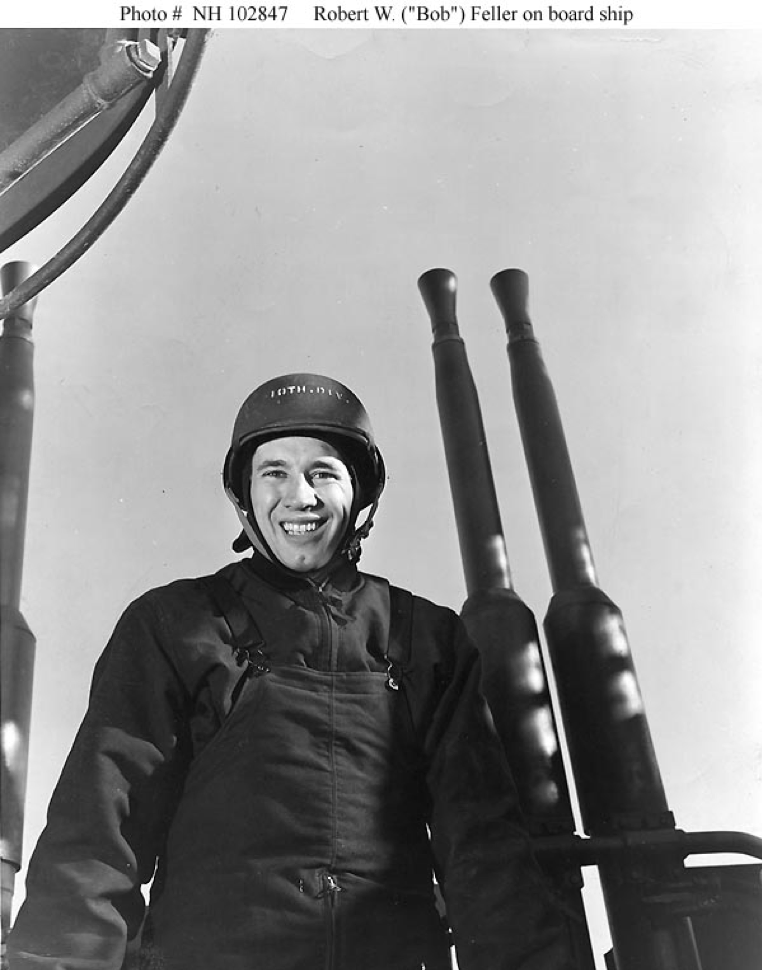 “I’ve seen everything of this sort ever attempted, but this tops them all. It has been an amazing job of promotion, and an amazing show.” — Commissioner Kenesaw Mountain Landis.1

After just a handful of seasons with the Cleveland Indians, Bob Feller had become an adopted son of the city. The Van Meter, Iowa, native had been loyal to the franchise since signing in 1936, but loyalty to his country was even stronger. After Pearl Harbor was attacked on December 7, 1941, the 23-year-old Feller became the first superstar in baseball to join the military, enlisting in the Navy two days later and leaving behind prime years of what was developing into one of the finest pitching careers of all time.2

So when Feller was announced as the starting pitcher for a group of military All Stars curated from bases across the country who would square off against the American League All-Star team on July 7, 1942, it’s no surprise that 62,094 fans flocked to cavernous Cleveland Stadium to see their favorite baseball hero turned American hero back in action.3 The AL squad earned the right to face the military team by defeating the National League 3-1 a day earlier in front of 33,694 fans at the Polo Grounds in New York in the 10th annual major-league All-Star Game.

Feller cautioned “not too expect too much” going into the game,4 and though he did struggle against the first eight hitters in the 5-0 loss to the American Leaguers, the real winners were the Army and Navy Relief Societies and the Clark Griffith Bat and Ball Fund for servicemen, which were the recipients of the proceeds from both All-Star matchups.5

“Poor Feller didn’t have a thing,” said Navy Lt. Mickey Cochrane, who was piloting the service stars and had watched Feller pitch against his Tigers three times while managing in Detroit in 1936 and ’38. “I’ve never seen him get belted like that. It proves that he wasn’t there – that his duties in the Navy have robbed him of his timing, his control.”6

But for Feller, winning a ballgame was “not of much importance until the war is over.”7 The fireballing righty proudly donned his Norfolk naval team’s uniform during the game but said he “just couldn’t seem to get loosened up.”8 Since joining the Navy, Feller had not taken a regular turn on the mound and admitted to throwing a lot of “ham and eggers” against the lesser military competition he’d faced that spring and early summer.9

“Baseball in the Navy always was much more fun than it had been in the major leagues. There was an absence of tension and any personal ambition,” Feller wrote in his 1947 autobiography, Strikeout Story. “It was the best kind of recreation and I believe it furnished a great amount of pleasure for thousands of sailors who often found little else to do in a town as crowded as Norfolk.”10

And for tens of thousands of men and women for one night in a big city like Cleveland.

In the top of the first inning, Cleveland Indians starter Jim Bagby – the perfect pitcher for the game, considering that his father was the ace of the 1920 World Series champion Indians – got himself in a jam against the Military All Stars. He issued a one-out walk to Benny McCoy, watched as Don Padgett’s fly ball fell between three fielders just inside the foul line in left field for a single, and walked Cecil Travis on four pitches to load the bases. Bagby issued three straight balls to Joe Grace but came back for the strikeout. A groundout to third by Johnny Sturm ended the threat – much to Cochrane’s dismay.

“We lost that one in the first inning. A base knock when we had three on would have changed the entire game,” Cochrane said. “You don’t get many chances to beat a team like those American Leaguers, and you have to grab the chances when they pop up. We just muffed the big opportunity, that’s all.”12

Feller came to the mound in the bottom of the first to a rousing ovation from his former hometown crowd, but he wasn’t the same phenom mound hero he had been less than a year earlier. His first test came in the form of the 24-year-old player-manager of the Indians, Lou Boudreau, who the day before became the first player to lead off the All-Star Game with a home run.13

Boudreau put one in the air again, but it was caught for an out in center. After that, Feller couldn’t handle Tommy Henrich’s scratch single up the middle. He walked Ted Williams and allowed an RBI single to Joe DiMaggio for the first run of the game.14 On the next pitch, Rudy York lofted a fly ball to deep right field that brought home Williams and gave the American Leaguers a 2-0 lead. Bobby Doerr was retired on a foul popup to end the inning.

Ken Keltner – a teammate of Feller’s in Cleveland who joined the Navy in 1945 – launched Feller’s first offering of the second inning to deep center for a triple. Buddy Rosar singled to left for a 3-0 lead, which ended the evening for Feller – who again received thunderous applause.15 Johnny Rigney relieved and was effective for the next five innings, but his teammates weren’t able to string together much offense in that span.

The Military All-Stars finally threatened again in the seventh with back-to-back singles from Sturm – who sent a sharp liner just over a leaping York – and Ernie Andres to open the inning, but after a strikeout, the AL turned its second double play of the game to quash the rally.

The AL put the game away with a scoring outburst in the bottom of the frame. With Mickey Harris on the mound in relief, Phil Rizzuto led off with a double16 and stole third, and Williams lifted a one-out triple to left-center. Two batters later, pinch-hitter George McQuinn tripled to right-center for a 5-0 lead.17

“I had a swell ride coming up,” said Harris, who left the Boston Red Sox for the Army and had been training some 5,000 miles away in the Panama Canal Zone, “but it was nothing like the ride Ted Williams gave that high hard one of mine. Ted had walked three straight times, and when he came up against me I decided he’d have to hit that apple to get on. He did.”18

Sid Hudson of Washington and Tex Hughson of Boston followed Bagby on the mound for the AL to finish out the shutout. The trio combined to allow just six hits, but manager Joe McCarthy of the Yankees said the strong showing was more circumstantial than the result of a talent differential.

“We won because we have had the opportunity to play regularly. It wasn’t quite so much the difference in ability or managing as it was the difference in the immediate background of the men concerned,” McCarthy said. “Our boys have done nothing but play ball for three months. The service boys were playing ball – but they also were learning how to fight a war.”19

Thousands more baseball players from all levels eventually left behind their promising careers and flocked to the war effort before the conflict ended in 1945, but on one night in Cleveland, baseball was back at the forefront, a welcome sign of normalcy for a few hours. And for many of the servicemen in the game, it marked one of the last times they soaked in the feeling of playing in a major-league stadium.

Sturm played 124 games for the 1941 World Series champion New York Yankees but saw action in just four minor-league seasons after the war. Chet Hajduk, who replaced Sturm at first base during the game, had just one major-league game to his credit in 1941, and couldn’t make it back to the big leagues in the five seasons after the war.

McCoy was a promising star before the conflict but couldn’t latch back on professionally after his discharge, and Heinie Mueller – who doubled in his lone All-Star at-bat in the eighth – had only short stints in the minors in 1946 and ’49. Others like Johnny Grodzicki (19 games over two seasons), Andres (15 games), Frankie Pytlak (13 games over two seasons), Vinnie Smith (9 games),20 and Morrie Arnovich (1 game) made it back to the biggest stage, if only for a few fleeting moments.

The annals of history record the game as a loss for the military stars, but what they helped accomplish over the next several years was far more important that the result of any baseball game that’s ever been played.

“As for the service team,” Frederick G. Lieb wrote in The Sporting News, “they lost, but their training had been for a bigger game. Their victory will come later.”21

And it was perhaps the greatest victory of all time.

In addition to the sources cited in the Notes, the author consulted the Baseball-Reference.com, Stathead.com, and Retrosheet.org websites for pertinent materials. He also used information obtained from game coverage from several major newspapers, most notably the Cleveland Plain Dealer. I also listened to a radio broadcast of the game, which was uploaded to YouTube by Classic Baseball on the Radio.

2 Another superstar, Hank Greenberg of the Detroit Tigers, had served in the Army during the 1941 season after being drafted under the Selective Training and Service Act of 1940. Greenberg was discharged from the Army on December 5, 1941, but re-enlisted after Japan bombed Pearl Harbor two days later. Commissioned as a officer, Greenberg then served on active duty until his discharge on June 14, 1945. John Rosengren, Hank Greenberg: The Hero of Heroes (New York: New American Library, 2013): 210.

3 As the largest ballpark in baseball, Cleveland Stadium provided the ideal backdrop to attract a large crowd to benefit charitable causes.

5 The major-league All-Star Game the day before provided nearly $100,000 in proceeds to the same funds. In Cleveland, $62,094 was also raised in the form of $1 war bonds after each fan was required to purchase one to get into the game.

14 Had a similar version of this All-Star Game been played in 1943, both Williams and DiMaggio would have been on the service side of the field. Williams joined the Navy Reserve on May 22, 1942, and went on active duty in 1943, while DiMaggio enlisted in the Army on February 17, 1943.

15 Despite the poor stat line, Feller indicated he saw some success with his new “slider” during the game. He developed the pitch during his time with the Great Lakes Naval Station. Dennis Dalton (United Press), “Americans Get Less Thrills in Victory Over Service Team,” St. Louis Star-Times, July 9, 1942: 16.

16 Rizzuto thought about trying for a triple, but slipped after passing second base. He was able to regain his footing and dive back in before a tag would have negated his double.

17 The only major-league All-Star team through 2021 to record three triples in a single All-Star Game was the 2012 National Leaguers, who got triples from Pablo Sandoval, Rafael Furcal, and Ryan Braun.