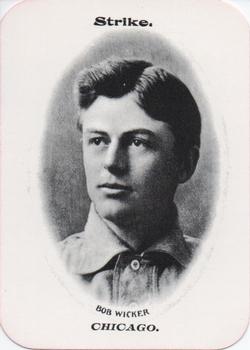 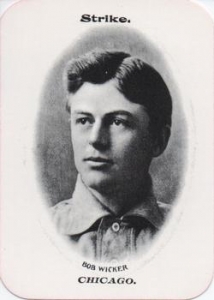 The Chicago Inter Ocean described it as the “greatest pitchers’ battle that has been seen” in the Polo Grounds.1 The Chicago Colts’ Bob Wicker emerged victorious, 1-0, in a grueling 12-inning battle with the New York Giants and Joe McGinnity. Sportswriters across the country praised Wicker’s performance and his string of 9⅓ hitless innings, apparently ended by a 10th-inning single that was too hot for his third baseman to handle.

“Seldom has a team been as helpless before a twirler as the Giants were before Wicker,” gushed the Inter Ocean.2 The New York Sun raved, “With an arm that swings from waist to shoulder and a surge and jerk, Wicker shot ball after ball with such wizard-like method and seductive system that he had New York batsmen standing on their heads.”3

Though unknown by most baseball fans, Wicker’s name still occasionally pops up in discussions of pitchers who lost no-hit bids in extra innings. Some sources, however, maintain that Wicker surrendered a first-inning single, turning his one-hit shutout into a two-hitter, with his no-hit bid snuffed out long before it warranted attention. The truth, in this case, may never be known without the official scorecard.

The June showdown between skipper Frank Selee’s third-place Colts (27-14), also called the Cubs in some reports, and manager John McGraw’s NL-leading Giants (29-13) was the focus of the baseball universe. In the middle of a 20-game road swing, the Colts had lost three of their last four games, including the first of a three-game set against the Giants to fall from the top spot.

Toeing the rubber for the Gothams was McGinnity, whose moniker “Iron Man” derived from his background of working in mines, though it also aptly conveyed his durability and penchant for tossing both games of a twin bill. A robust 5-foot-11, 210-pound right-hander, McGinnity was coming off a spectacular season, his first full campaign since the Giants acquired him as a free agent in midseason 1902 when the American League Baltimore Orioles released him. He led the NL with 31 wins and 434 innings pitched. On his way to another NL wins crown in 1904 – his fourth in six big-league seasons – McGinnity was undefeated in 14 decisions, pushing his career slate to 148-82. He relied on a fastball and curveball, confusing batters with overhand, side-arm, and underhand deliveries.

Lacking McGinnity’s track record, Wicker was still an emerging star in his own right. Acquired from the St. Louis Cardinals in April 1903, the 6-foot-2 right-hander went on to win 20 games as part of the North Siders’ trio of 20-game winners, who also included Jack Taylor and Jake Weimer. An exceptional athlete and capable hitter, the 27-year-old moved into a two-way role in 1904. He entered the game with a 5-1 record on the mound, and had made 17 starts in the outfield, including handling center field in the Colts’ 5-0 loss to the Giants a day earlier.

On a beautiful, 80-degree Saturday afternoon in the nation’s largest city, the Polo Grounds was packed with 38,805 spectators.4 “Majestic in size” and the “pinnacle of proof of the popularity of baseball,” per the Sun, the overflowing crowed set a new attendance record in the 16th season of major-league baseball beneath Coogan’s Bluff, breaking the mark of 37,223 set just one week earlier.5 Planks laid out in front of the spectators marked the field’s boundaries. Amazingly, “players were not hampered in the least,” according to the Sun. Despite the enormous throng, there were ample “blue coats” to ensure order on the field and stands.

After McGinnity yielded a two-out infield single to speedy Frank Chance in the first, Wicker fanned Giants leadoff hitter Roger Bresnahan in what emerges for historians as the most intriguing inning. The next two batters, George Browne and Art Devlin, reached on “fumbles” by third baseman Doc Casey and shortstop Joe Tinker.6 Those two miscues were the “beginning and end of Chicago’s mistakes,” noted the Sun.7 Wicker struck out the next two batters to end the inning.

This much is certain: Wicker yielded only two other baserunners after the opening frame. “The quiet Chicagoan,” opined the Tribune, “studied his men like so many mathematical problems, seeking out their weakness, with splendid success.”8 In the second, Jack Warner coaxed a walk. With one out in the 10th, Sam Mertes hit a tricky grounder to third base. According to the New York Times, the ball “caromed off [Doc] Casey’s hand in the direction of leftfield.”9 The Chicago Tribune described it as a “lucky drive.10 Left fielder Jimmie Slagle fielded the ball and whipped it to second, and Mertes was erased in a rundown.

Sportswriters were quick to praise Chicago’s defense, especially that of second baseman Johnny Evers and shortstop Tinker, who combined for 11 assists and three putouts. The Sun raved that Tinker’s acrobatic fielding “was at once productive of admiration and distress on the part of the onlookers.”11

While Wicker was tossing the game of his life, McGinnity was “anything but disgraced,” opined the Inter Ocean.12 With fans cordoned off on the field and the stands filled to capacity, the enormous crowd produced an “applause [that] was almost continuous from start to finish,” reported the Tribune.13 McGinnity “worked like the Spartan pitcher he is,” praised the Tribune, and escaped several jams.14

Davy Jones led off the top of the second by beating out an infield grounder to third base and took second on Evers’ sacrifice. Tinker followed with a shot to right field that looked like a hit. But in what may have been the defensive play of the game, George Browne “electrified the populace with a beautiful low, running catch” to save a run.15

The top of the seventh produced the game’s most exciting action. With two outs, Evers belted a long shot “into the front of the left field bleachers,” reported the Tribune.16 The Giants, however, caught a break as the ball went into the crowd, limiting Evers to a ground-rule double.

After Tinker’s single advanced Evers to third, the duo tried a daring delayed double steal with Otto Williams, who entered the game batting just .097, at the plate. Tinker broke for second as catcher Warner returned the pitch to McGinnity, who wheeled around and fired a strike to shortstop Bill Dahlen, just as Evers raced home. Tinker was safe when Dahlen dropped the ball, but the veteran infielder, who began his big-league career with Chicago in 1891, recovered to throw home, erasing Evers by “six feet” to end the inning.17

Frank Chance’s leadoff single in the 12th began the Colts’ fateful rally. Johnny Kling hit what appeared to be a tailor-made double-play grounder to third. Devlin’s throw to Dahlen covering second was too late to erase the speedy Chance, though Dahlen’s toss to first was in time. After Chance moved to third on Dan McGann’s groundout, Evers singled past Dahlen to drive in what proved to be the game’s only run.

Wicker took the mound in the 12th and recorded two quick outs, dispatching Bresnahan and Browne. His performance dispelled any lingering memories of his last outing, three days earlier when the Brooklyn Superbas knocked him from the box in the second inning.18 Wicker “mixed up his curves neatly, and changed the pace with no more indication of his intent than a graven image.”19 In dramatic fashion, Wicker fanned Devlin for his 10th strikeout to end the game in 2 hours and 15 minutes. According to the Tribune, fans stormed the field and carried Wicker off.20

“The Colts won deservedly and clearly,” proclaimed the Tribune with a dose of homerism.21 In a career-defining performance, Wicker’s victory moved the Colts to within a half-game of first place. He set a career high in punchouts and tied his career-best with 12 innings pitched.

It appears, however, that he may not have lost a no-hitter on Mertes’s single in the 10th, as newspapers commemorate even today in “On this Day in Baseball History” columns.22 While New York newspapers credited Wicker with 9⅓ innings of no-hit baseball and an eventual one-hitter, Chicago papers including the Tribune and Inter Ocean prominently called it a two-hitter.

Specifically, the Tribune referred to Devlin’s “scratchy safety” in the first as one of the Giants’ two hits. New York’s coverage appears to have counted it as an error on Tinker, resulting in a one-hitter. Box scores at Baseball-Reference.com and Retrosheet.org reflect the Chicago coverage, with Devlin and Mertes credited with the Giants’ two hits and Casey having their only error. Whether the official scorer sided with the “one hit” or “two hit” camps may never be known.

Epilogue: A controversial scorer’s decision deprived Wicker of a no-hitter on September 24 in the first game of a twin bill against the Superbas in Brooklyn. With one out in the seventh, Harry Lumley grounded toward first; Chance’s throw to Wicker covering first was high and Lumley was called safe. Echoing other game accounts, the Tribune opined that the throw “could easily be called an error.”23 Wicker settled for a one-hit shutout and faced only 27 batters.

He finished the season with a 17-9 record, while completing 23 of 27 starts. Seemingly at the top of his game, Wicker suffered a number of setbacks beginning in 1905, as Bill Lamb explained in his SABR biography.24 Injuries and battles with weight ended his big-league career in 1906 with a 64-52 lifetime slate.

2 “Cubs Shut Out the Gotham Giants,”

5 “Biggest of Baseball Season,” New York Sun, June 12, 1904: 8. The paper reported, “There was a solid circle of people – barring a break in front of the grand stands between the team’s benches – clear around the field.”

12 “Cubs Shut Out the Gotham Giants.”

22 An example of such a column, and there are hundreds of them, which credit Wicker with a 9⅓-inning no-hitter and a one-hit shutout: “1904: Wicker of the Cubs pitched …,” Chicago Tribune, June 11, 2003. https://www.chicagotribune.com/news/ct-xpm-2003-06-11-0306110382-story.html. Sportswriters routinely refer to Wicker’s 9⅓-inning no-hitter and one-hit shutout in lists of the best pitching performances in Cubs history. Al Yellon, “The 19 Greatest Starts in Cubs History, No. 19: Bob Wicker, June 11, 1904,” Bleed Cubbie Blue, June 15, 2020. https://www.bleedcubbieblue.com/2020/6/15/21290669/cubs-history-greatest-starts-bob-wicker-september-24-1904. The website NoNoHitters.com, which chronicles every no-hitter in major-league baseball history, lists Wicker’s performance among no-hitters lost in extra-innings; https://www.nonohitters.com/.