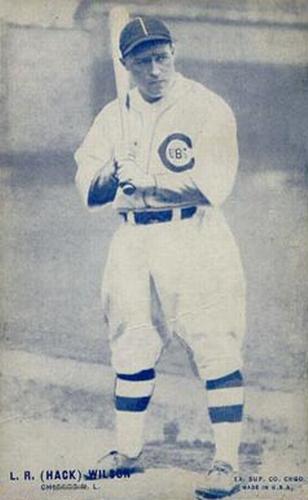 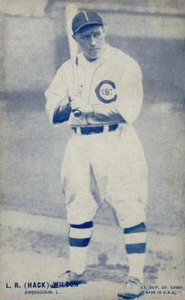 “Part of [Hack] Wilson’s legend was his physical appearance. At 5-foot-6 and 195 pounds, he had spindly legs and a shoe size of five and a half. He had a massive upper body, including an 18-inch neck that was reminiscent of a fire hydrant.”1

Fresh off a 13-3 loss to the first-place St. Louis Cardinals in the opener of a five-game series at Wrigley Field in June 1929, the Chicago Cubs put center fielder Lewis “Hack” Wilson, regularly their fifth-place batter, into the cleanup spot on June 18 for the first time all season.2 The move paid off handsomely as Wilson’s two home runs, including a grand slam in the fifth inning, lifted the Cubs to a 13-6 victory over their archrivals, the defending National League pennant-winners.3 Manager Joe McCarthy’s club beat the Cardinals three more times over the next two days to seize the NL lead for the first time since May 27.

Wilson, who had joined the Cubs for the 1926 season and led the NL in home runs in each of his first three campaigns in Chicago, hit “from a wide-open stance, swinging from his heels, and using long, thin-handled bats that weighed in the neighborhood of 42 ounces,” wrote author Robert Cohen, who ranked the West Virginia native number 11 on a 2017 list of the 50 greatest players in Cubs history. “He developed a reputation as a drinker. When asked if he ever played a game while under the influence of alcohol, he said, ‘I never played drunk; hung-over, yes … drunk, no.’”4

The Cubs moved ahead, 3-2, in the bottom of the second when Charlie Grimm, who had singled and reached third on a fielder’s choice and error, crossed home plate on Clyde Beck’s single.

Woody English added another run to Chicago’s lead by driving in Blake from second base with a single in the fourth inning. Blake, a 29-year-old right-hander who allowed five runs and nine hits in 6? innings, went 2-for-3 at the plate, scored twice, and knocked in a run.

The Cards took a 5-4 lead in the fifth when reigning NL MVP Jim Bottomley, whose 31 home runs in 1928 had tied Wilson for the league lead, homered with Taylor Douthit and Frankie Frisch on base and two outs.

But St. Louis’s one-run advantage lasted only until the bottom of the inning. Haid retired the first two batters in the fifth, but Grimm tripled and Mike Gonzalez walked.5 The next hitter, Blake, reached by beating the third baseman’s throw to Bottomley at first as Grimm scored the tying run. The next day, the St. Louis Star commented that Blake arrived at approximately the same time as the throw to first, and umpire George Magerkurth ruled Blake safe.6

“It was this break that gave Chicago the game,” the newspaper added, “and tightened even more the already tangled race for the pennant.”7

The next batter, Beck, drove in Gonzalez and Blake with a double. English and Hornsby then walked to load the bases. Cardinals manager Billy Southworth replaced Haid with Herman Bell. On a full count, Wilson smashed a pitch from Bell into the right-field bleachers. Wilson had his 13th home run, and the Cubs had a seven-run inning and an 11-5 lead.

“Southworth evidently wanted to try out the youngster at the earliest possible opportunity,” the St. Louis Star said of Holland the next day.8 Holland, a “long, lean right-hander” with a “sweet fast ball” who had pitched in a handful of games with the Cincinnati Reds and New York Giants,  had signed with St. Louis just before the Cardinals began their seven-day road trip on June 17.9 Holland had been recommended by Cardinals coach Greasy Neale, who had coached him at the University of Virginia before joining the St. Louis coaching staff.10

After St. Louis loaded the bases with one out in the seventh inning, Guy Bush came in and struck out Orsatti and retired Bubber Jonnard on a popup.

The Cards got a run in the eighth inning on Charlie Gelbert’s home run off reliever Bush, but the Cubs answered with two runs in the eighth. Grimm walked with one out and advanced to third on Gonzalez’s single. Bush singled, scoring Grimm and putting Gonzalez on third. Chicago’s final run came home when Bush and Gonzalez pulled off a double steal.

Bush gave up a single by Hafey in the ninth, but retired Bottomley, Hafey, and Orsatti to close out the game. (A day later, Bush started the second game of the Cubs-Cardinals doubleheader and picked up a complete-game win; his 50 appearances in 1929, including 20 games in relief, led the NL.)

On June 18 Wilson beat the Cardinals with his glove as well as his bat. “Although he was sloshing perspiration all over the premises, Hack also had a great day in the field, twice crashing into the center-field screen to pull down potential triples,” the Chicago Tribune reported.11

Wilson went 9-for-18 with five home runs, nine runs scored, and 14 RBIs against the Cardinals during the five-game series at Wrigley Field. On June 20 he started a 27-game hitting streak in which he went 42-for-107, hit 9 home runs, scored 28 runs, and drove in 30. He added a 20-game hitting streak from August 31 to September 21.

The Cubs won their first NL pennant since 1918 but fell in five games to the Philadelphia Athletics in the World Series. Wilson hit .471 in the Series, going 8-for-17 at the plate. He also made two crucial errors when he lost the ball in the sun in the seventh inning of Game Four. As a result, the Athletics overcame an 8-0 deficit with a 10-run inning and took a commanding lead in the Series.

While the Cubs captured the pennant in 1929, the Cardinals finished fourth with a 78-74 record under three managers: Southworth, Gabby Street, and Bill McKechnie.

Wilson had an even better season in 1930, clubbing 56 homers, driving in a major-league-record 191 runs, and compiling a club-record 1.177 OPS. After he fell out of favor with Hornsby, who replaced McCarthy as Chicago’s manager at the end of the 1930 season, Wilson’s career declined sharply.13 He retired after playing in 59 games with the Albany Senators of the Double-A International League in 1935. He died in Baltimore on November 23, 1948, at age 48, and was elected to the Baseball Hall of Fame in 1979.

Games like the one on June 18, 1929, though, thrilled Cub fans everywhere. As McCarthy remembered, “I never saw a guy win games the way he did that year. We never lost a game all year if he came up in the late innings with a chance to get a hit that would win it for us. … No tougher player lived than Hack Wilson.” 14

In addition to the sources listed below, the author used Baseball-Reference.com, Newspapers.com, and Retrosheet.org.

5 Gonzalez played in 60 games for the Cubs in 1929; deadness in regular catcher Gabby Hartnett’s right arm limited the future Hall of Famer to one game in the field and 25 pinch-hit appearances. Hartnett went 0-for-3 as a pinch-hitter in the World Series that year. William Johnson, “Gabby Hartnett,” Winning on the North Side: The 1929 Chicago Cubs, 83.

8 “Sherdel and Johnson to Hurl Double Header With Cubs Today.”

9 “Sherdel and Johnson to Hurl Double Header With Cubs Today.”

10 “Sherdel and Johnson to Hurl Double Header With Cubs Today.”

13 McCarthy went on to manage the New York Yankees to eight pennants and seven World Series titles. Wolf, Winning on North Side: The 1929 Chicago Cubs, 288.