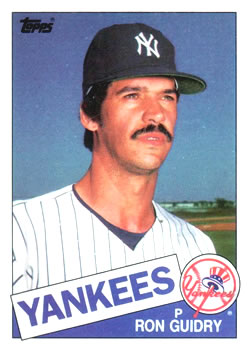 A sunny, breezy afternoon in Tiger Stadium before a crowd of 41,774 was the setting for the NBC Saturday Game of the Week on June 22, 1985. Vin Scully and Joe Garagiola were on hand to broadcast the contest between the defending World Series champion Detroit Tigers and the New York Yankees.1 Detroit manager Sparky Anderson had right-hander Dan Petry, whose nine wins led the league, on the mound. The Tigers had won 10 of their last 12, including the previous two nights against the Yankees. Detroit hitters were on a roll, scoring 34 runs in their last four games.

The Yankees’ season had not begun as planned. Owner George Steinbrenner fired manager Yogi Berra after 16 games and installed Billy Martin at the helm for the third time. Steinbrenner gave spring-training assurances that Berra would be the manager for the entire season — “Even if we get off to a bad start”2 — but he fired him on April 28. During the pregame conversation with Scully, Garagiola, Berra’s lifelong friend from their childhood in St. Louis, said he preferred not to comment on the firing. The Yankees were fifth in the American League East, 7½ games behind the first-place Toronto Blue Jays and five behind the second-place Tigers.

Martin had created a six-man pitching rotation, led by left-hander Ron Guidry, whom the Yankee manager slotted in every fifth game. In his previous outing, on June 17, Guidry shut out Baltimore 10-0 for his sixth straight win. Now 34 years old and in his 11th season, Guidry said of his repertoire: “I still have the luxury of good velocity, but not consistently. I used to throw 92 to 95 miles per hour, and now it’s more like 85 to 92. So, I have worked on the changeup and I turn the fastball over, changing speeds … I throw the slider now so that it is not quite a strike. But with the count 3-and-2 you can’t throw it as a ball. So, I throw it not as hard as I used to.”3 Guidry’s record stood at 7-3. The shutout of Baltimore moved him ahead of Vic Raschi into eighth place on the Yankees career list with 25.

The Yankees got off to a quick start against Petry in the first. Ken Griffey walked with one out and stole second while Don Mattingly struck out. Dave Winfield lined a single through the left side, driving in Griffey to make it 1-0.

As if to evoke memories of his 1978 season, when he won the AL Cy Young Award with a 25-3 record and a majors-best 1.74 ERA, Guidry came out firing in the first inning and struck out Tom Brookens, Alan Trammell, and Kirk Gibson in a row. Petry pitched around Ron Hassey’s one-out double in a scoreless second inning. In the bottom half, Lance Parrish drove a double over Rickey Henderson’s head in left-center field for one of the few hard-hit balls of the game by Detroit. But Guidry, facing a lineup stacked with eight right-handed hitters, got Larry Herndon to ground out, Barbaro Garbey to pop out, and Alejandro Sanchez to ground out, stranding Parrish.

Detroit’s Doug Flynn singled with one out in the third, but Guidry struck out Brookens again. As Trammell stepped in, Scully noted that the shortstop “came into the game with 10 hits in his last 18 tries.” Guidry retired him on a fly ball to Griffey in left for the third out.

New York expanded its lead in the fourth. Winfield hit a hard liner past third and into the corner for a double. After Don Baylor flied out, Hassey singled to center, scoring Winfield for a 2-0 lead. Petry turned a sharp one-hopper to the mound by Willie Randolph into an inning-ending double play, but Guidry now had a two-run lead.

Guidry retired Gibson, the only lefty in Detroit’s lineup, on a soft fly ball to start the fourth, but Randolph bobbled Parrish’s grounder to second. When Herndon lined one to center for Detroit’s third hit, with Parrish stopping at second, the Tigers were threatening again. But Garbey hit a sharp grounder to Pagliarulo, who stepped on third and threw to Mattingly at first for the double play, and that’s how the inning ended.

In the sixth, Mattingly lined a one-out hit in front of Sanchez in right field. Martin called for the hit-and-run with Winfield at bat. Winfield struck out, but Mattingly upended Flynn at second with a head-first slide for a stolen base.

Baylor swatted a pitch to deep left field, and it bounced off the façade of the upper deck back onto the field. It was the 35-year-old Baylor’s first extra-base hit since June 7. The homer was his 12th of the year, leading the Yankees. Garagiola said, “Baylor had been having problems, but he had no problem with this one.” “I was upset that I gave up that home run,” Petry said later. “A 2-0 game is still within reach but a 4-0 lead with Guidry pitching that way was just too much.”4

Meanwhile, Guidry retired the Tigers in order in the fifth and sixth innings, allowed just a single by Garbey in the seventh, and set Detroit down in order in the eighth. Garbey was the Tigers’ only baserunner in the last five innings.

Guidry and the Yankees carried their 4-0 lead to the ninth. Trammell walked up to the batter’s box to lead off the inning and Scully announced, “Ron Guidry is the Lite Beer from Miller Player of the Game.” Scully continued, “We mentioned Dan Petry had thrown 142 pitches; Guidry has only thrown 90 pitches — 60 of them strikes. He has not walked a batter and he has struck out a half a dozen.”

With the count 1-and-0, Guidry delivered a breaking ball for a called strike. Trammell pulled a curve to left, but Griffey came up and caught it for the first out. Gibson followed; Scully noted that his eight-game hitting streak was on the line. Gibson was out in front of a low breaking ball on the outside corner, missing it for strike one. The second pitch was a slider away and Gibson swung under it, slicing a high fly ball to left. Two outs.

As Parrish set up, Guidry walked back behind the mound, and began a deliberate march straight up to the rubber. He looked down and spit, then looked up for the sign. Parrish was way out in front of the curve; he fouled it into the ground near his back foot. The veteran smiled and looked at Guidry. Garagiola said, “We’ve talked about guys knowing how to close a game; Guidry is a guy who is a good closer.”

The second pitch to Parrish was a changeup a little high and outside. Guidry threw again, and Parrish was out in front of another breaking ball, causing him to foul it straight down. He shook his head while stepping away from the batter’s box toward the third-base line. Scully said, “Guidry is trying to close a wicked offensive attack.”

Guidry took his customary full windup and delivered a fastball on the outer edge of the plate. Parrish banged a fly ball to right. Scully’s description: “Remember the wind, and Winfield has some room and makes the catch five or six feet shy of the right-field screen.” Scully continued, “The 26th lifetime shutout for Ron Guidry, and as far as Detroit, they were never really in the game. There was no way Ron Guidry was gonna let it get away.”

Guidry baffled the Tigers with a mix of changeups, cut fastballs, and sliders, and said,

“I’m so around the plate with so much confidence in the pitches I’m throwing. I don’t think the fastball is my best pitch anymore.”5

The Tigers recognized the beauty of the performance. “You’ve just got to tip your hat to him,” said Gibson. “We didn’t have a chance today.”6 “Guidry took all the mystery out of it,” lamented Sparky Anderson.”7

Randolph had a good view of Guidry’s four-hit gem from second base and said, “When he’s confident you can feel it. You can tell just by the way he stalks the mound. He just wants the ball. But that’s just Ron Guidry.”8

The last time Guidry had tossed two shutouts in a row was in 1978. The Detroit whitewash, which turned out to be the last shutout of his career, moved him into a tie with Spud Chandler and Bob Shawkey for sixth place in New York annals.9 He finished 1985 with a 22-6 record and finished second for the AL Cy Young Award; both marks were second in his career only to his dominance in 1978. Led by Guidry, the Yankees finished second in the AL East, two games behind Toronto. Guidry’s growth from strictly a power thrower to an artistic craftsman was in full bloom in June, when he showcased this masterpiece.

In addition to the sources cited in the Notes, the author used the Baseball-Reference.com and Retrosheet.org websites for general player, team, and season data and the box score for this game. The author also referred to his VHS recording of this game for detailed descriptions of play.