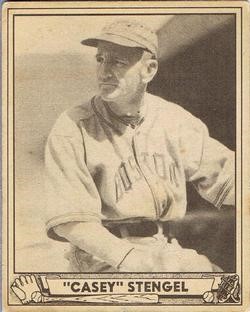 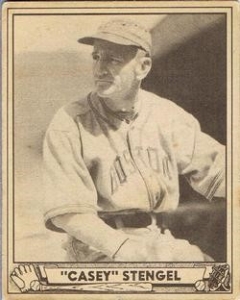 On May 10, 1939, the small city of Bradford, Pennsylvania, reentered professional baseball for the first time in 23 years when its Bees took the field in a brand-new league—the Class D1 Pennsylvania-Ontario-New York League, or PONY League.

As if that weren’t exciting enough, a big-league team came to town just a month and a half later. The National League’s Boston Bees, parent club of Bradford’s team, swung through Bradford, just south of Pennsylvania’s border with New York, on an offday for a friendly matchup against the newly constituted local nine. To fans in the city of about 18,000 people, it must have seemed like a sudden blizzard of baseball riches, an ascent to the big time at last. “It is expected that fans from miles around will be in attendance at the encounter in which some of the best major league talent will be seen in action,” the local paper trumpeted.2

Some of the pride and pomp, however, disappeared on game day, June 26. In front of a smaller-than-expected crowd, the big leaguers had things all their way against the locals, running up a 9-0 victory. It might have served to remind the Bradford boosters that baseball, sometimes a delight, can also be a cruel game.

Bradford, under the management of former outfielder John “Bunny” Roser, gave local fans plenty to cheer for in the early running in 1939. On June 26 they stood third in a six-team league with a 24-13 record, 1½ games behind the first-place Olean (New York) Oilers.3

Not counting Roser, who made a single playing appearance, three players from the 1939 Bradford squad went on to the major leagues—pitcher Ben Cardoni, second baseman Skippy Roberge, and catcher Mike Sandlock. Roberge and Sandlock started the exhibition game.

Roser tapped right-hander George Callas to pitch. Baseball-Reference does not credit Callas with any regular-season appearances in 1939 with any team, although he is known to have pitched for Bradford in 1940.4 A preview story in the Bradford newspaper described Callas as one of several new players added for the exhibition but did not explain where he came from.5

In contrast to the Bradford Bees, manager Casey Stengel’s Boston Bees were continuing their long tradition of pallid play. Entering the game, Boston’s 24-34 record placed it seventh in the eight-team National League, 12½ games behind the first-place Cincinnati Reds and ahead of only the equally downtrodden Philadelphia Phillies. In the previous 22 seasons, the team had placed as high as fourth only three times.

This prolonged futility had an impact at the turnstiles of National League Field,6 where the Bees drew just 285,994 fans in 1939, an average of 3,918 per game—second-worst in the league, again beating out only the Phillies.7 Stengel’s crew was just 3-7 in its previous 10 games, though the Bees had spanked the St. Louis Cardinals in both ends of a doubleheader the day before.

Stengel did not skimp on giving the provincial fans a good look at his roster. Future Hall of Famer Al Simmons, then 37 years old, played a few innings in left field. Debs Garms, who led the NL in hitting in 1940 with a .355 average, played the whole game in right field.8 Other Bees starters who played at least part of the exhibition included catcher Al Lopez, first baseman Buddy Hassett, left fielder Max West, center fielder Johnny Cooney, and third baseman Hank Majeski.

Two new arrivals to the Boston lineup also merit mentioning. Third baseman Otto Huber’s big-league career spanned just over a month, from June 10 to July 20, 1939. He’d played five big-league games before he appeared in the exhibition; he played only six more afterward. Stan Andrews, who did most of the catching, reached the bigs on June 11 and had played in only two regular-season games. He went on to play 70 major-league games over four seasons.

Stengel gave the start to a fringe member of his pitching staff. Right-hander Tom Earley was a Boston native, referred to in the Boston Globe as “Roxbury Tom.”9 He broke into the big leagues with two appearances with Boston in 1938 and followed up with 14 more in 1939, mostly out of the bullpen. Coming into the exhibition, he’d made seven appearances, posting an 0-3 record and a 5.89 ERA.10 Only one of his appearances was a start, in the second game of a June 11 doubleheader against Chicago; he was knocked out in the fourth inning and took the loss. Earley also spent part of the season with Boston’s Class A affiliate in Hartford, Connecticut, where he went 6-4 with a 3.36 ERA in 15 games.

Earley went the distance against Bradford and held the minor-leaguers “well in hand,” by the local paper’s report. He scattered seven singles and a double by Roberge while walking none and striking out four. The “Baby Bees” mustered only one serious threat, in the seventh inning. Sandlock and third baseman Bobby Blanchard opened with singles, and a sacrifice moved them to third and second. But Earley retired center fielder Ivan Kuester and shortstop Tom Kister to end Bradford’s hopes of scoring.11

Callas retired Boston without a run in the first inning but had to be taken out after pulling a muscle in his back. John Melech, who appeared in a few regular-season games for Bradford in the early part of the season, relieved him and worked four innings.12 Boston put its first run on the board against Melech in the second inning. Shortstop Eddie Miller singled off Blanchard’s glove, moved to second base on a wild pitch and stole third base. After a walk to Lopez, Miller scored on second baseman Rabbit Warstler’s groundout.13

The parent Bees picked up two more runs in the third inning. With two out, a walk to Hassett and a single into right field by West put runners on first and third. Majeski’s double off the left-field fence scored both runners for a 3-0 Boston lead.14 (In regular-season action, Majeski ranked third on the Boston team with 54 RBIs, trailing only West’s 82 and Hassett’s 60.) From there, Melech and relievers Jake Schoettle and Johnny Fiske shut out Boston from the fourth inning through the eighth.15

The game entered the realm of comedy in the ninth inning. Left-handed Bradford pitcher Ray Brinkerhoff had traveled with the Bees in 1938 before reporting to minor-league duty, and he spent much of the exhibition needling his former comrades from the bench.16

When Brinkerhoff was summoned to pitch the last frame, the Bostonians decided to repay the bush-leaguer for his bench jockeying. With one out, Earley singled on a bad-hop grounder and scored on Garms’s triple. Cooney drove in a second run with another single. Huber grounded to shortstop Kister, but Kister’s throw hit the umpire—described as an “unintentional interference” by the Bradford paper—and all runners were safe. Brinkerhoff got Simmons to fly out to right, but then surrendered another triple, to center fielder Jimmy Outlaw, and a homer to left field by Miller. Brinkerhoff finally ended the inning by getting Andrews to pop to third base. But he’d given up six hits and as many runs, bringing the final score to 9-0.17

The score might have been expected, given the difference in talent between major leaguers and low minor leaguers. More disappointing were the low attendance and the pace of play. The Bradford newspaper reported the gate as only about 2,000, one of the smallest crowds of the young season.18 The paper also called the game “a slow drawn-out exhibition and far from interesting to the spectators,” adding that fans had hoped to see more offense from the Boston team.19

(Three other exhibitions involving major-league teams took place that day. The American Association’s Milwaukee Brewers drew 6,500 fans for an exhibition against the Chicago Cubs in Milwaukee.20 The St. Louis Browns and Pittsburgh Pirates drew a crowd of 4,500 in Charleston, West Virginia,21 while 3,000 fans in Springfield, Massachusetts, turned out to see the Brooklyn Dodgers play the Springfield Nationals of the Eastern League.22 Given that Bradford was considerably smaller than the other host cities, a turnout of 2,000 in Bradford doesn’t seem bad by comparison. But apparently more fans were expected.)

Stengel’s Bees finished the season in seventh place, 32½ games back, with a 63-88 record and one tie. Their Bradford farmhands closed the year in third place, seven games behind first-place Olean, with a record of 59-45.23 The top four teams in the PONY League qualified for the postseason playoffs; Olean knocked off Bradford in the first round.24

Neither team survived the 1950s—at least, not in the same place they were in 1939. The renamed Boston Braves moved to Milwaukee prior to the 1953 season. With the exception of 1943, Bradford held a team in the PONY League until 1955. The cash-strapped 1956 Bradford team folded after just 12 games. The city rallied to regain a team for 1957, only to see it fold after 20 games, ending Bradford’s direct connection to professional baseball.25

Neither Baseball-Reference nor Retrosheet provides box scores of exhibition games, but the June 27, 1939, edition of the Bradford (Pennsylvania) Evening Star and Daily Record published a box score.

1 Class D was the lowest rung of the minors in 1939. In subsequent decades, the PONY League—later renamed the New York-Penn League — settled at the Class A level.

4 A Newspapers.com search for “George Callas” in 1939 did not turn up any articles indicating that Callas was active in professional baseball that season.

6 During the period in the 1930s when Boston’s National League franchise adopted the Bees name, its home ballpark, Braves Field, was renamed National League Field and unofficially nicknamed the Beehive, according to Ray Miller’s SABR Biography Project story about the ballpark. The Braves nickname returned in 1941.

8 Befitting the Bees’ poor fortune, Garms did not achieve this feat in a Braves uniform. Boston sold him to the Pittsburgh Pirates in March 1940.

10 Earley also earned credit for a save in an April appearance against the Phillies—though he didn’t know it at the time, since Major League Baseball did not officially recognize the save as a statistical category until 1969.

12 A Newspapers.com search of the Bradford paper finds several references to Melech in games from May and June. Baseball-Reference’s entry for Melech indicates he appeared for Bradford in 1939 but does not list statistics for him. Several Bradford news articles from the spring of 1939 also refer to a pitcher named John Mehalechko; it’s unclear whether Melech and Mehalechko were the same person. John Mehalechko has a separate Baseball-Reference entry that credits him with pitching elsewhere at the Class D level in 1939, in the North Carolina State League, but does not list any appearances with Bradford.

13 “Boston Bees Take 9-0 Decision from Baby Bees in Exhibition Game; Small Crowd on Hand.” The Bradford paper’s game narrative incorrectly lists this run as scoring in the first inning. The full box score in the Bradford paper and the line score in the Boston Globe both say the run scored in the second inning.

15 Schoettle, who worked the sixth and seventh, is credited in Baseball-Reference with 10 regular-season appearances for the 1939 Bradford team. He is listed as playing three seasons in the low minor leagues, ending with a 12-10 record for Bradford in 1941. Fiske, who worked the eighth inning, is listed in Baseball-Reference as having pitched for Landis in the North Carolina State League in 1939—the same team as John Mehalechko. (See Note 12.)

17 “Boston Bees Take 9-0 Decision from Baby Bees in Exhibition Game; Small Crowd on Hand.” Also: Moore. The narrative in the Bradford paper lists Outlaw’s hit as a single, but the Globe’s story and the box score both credit Outlaw with the inning’s second triple.